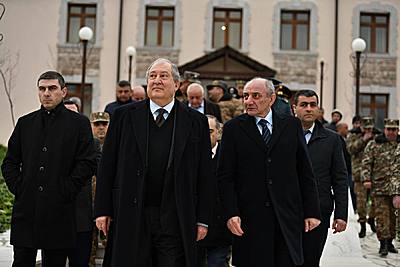 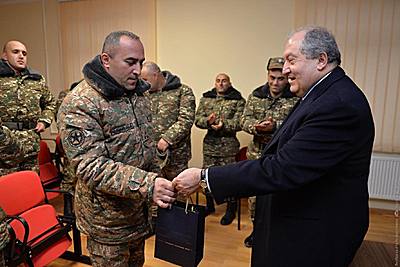 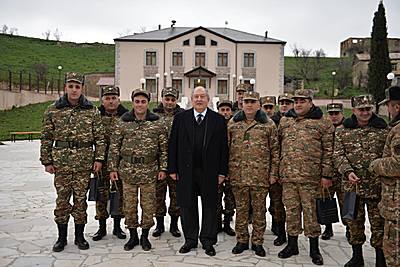 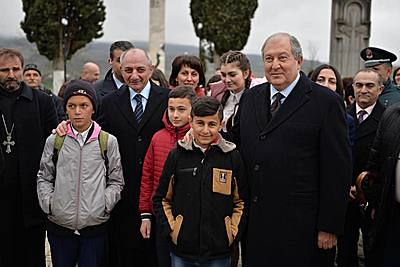 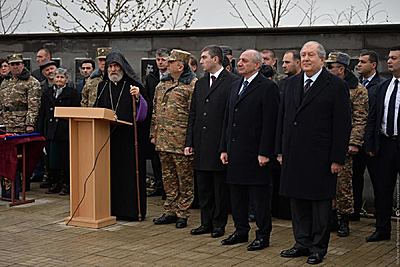 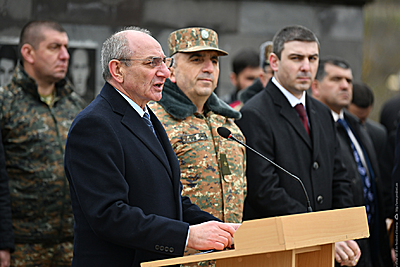 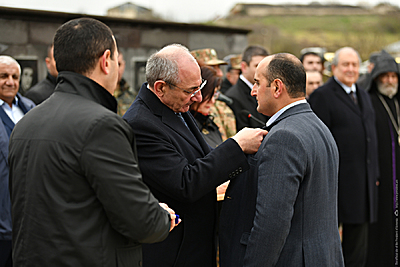 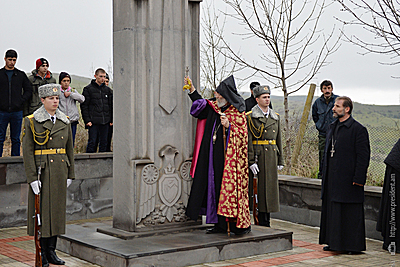 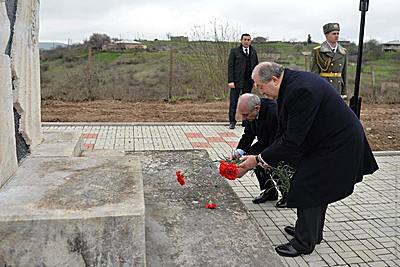 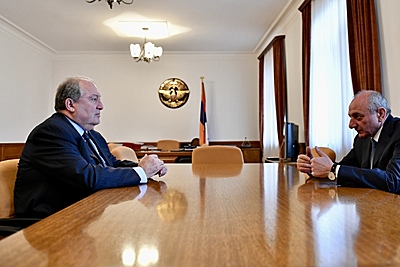 President Armen Sarkissian, who is in Artsakh on a working visit, together with Bako Sahakian visited Talish village in Martakert region. The Presidents of two Armenian states laid a wreath to the memorial of the heroes, who fell during the April, 2016 war unleased by the foe and sons of the Armenian nation, who sacrificed their lives in Artsakh war, and paid tribute to their memory.

Later, Presidents of Armenia and Artsakh met with the servicemen and freedom fighters - participants of the April, 2016 war.

The President of Artsakh told President Sarkissian about the program of reconstruction of Talish and noted that large-scale works were underway.

Addressing his words of gratitude to the participants of the military actions in April of 2016 for their dedication to the duty before the Fatherland, for fulfilling it diligently and selflessly, President Armen Sarkissian said, “I have come to bow to you and to tell that I am proud of you, I am proud that the troops of the victorious Army are sitting right in front of me.” President Armen Sarkissian thanked them and said, “Today it’s not only about me speaking and you listening. I have come to see, to feel, and also to listen to you. Words of troops, officers, who were on the frontline, are very important for me.”

A cordial and sincere conversation was held in a warm atmosphere. Discussed were issues related to the April, 2016 military actions, ensuing events, and accomplished works. President Armen Sarkissian viewed the heroic deeds of the young men, who sacrificed their life and health, demonstrated valor and courage, as a brilliant example of patriotism for the current and future generations.

Along with the courage of the young men, President Sarkissian stressed the importance of their experience and noted that in any area, including military, there are things to learn every day. “There is no doubt that the April War was a great experience. Nobody can assess it better than you – soldiers and officers,” the President of Armenia said and recalled that in those days in the Armenian circle in different countries there was a kind of awakening; people, mostly young people, wanted to come to the Fatherland, to defend its borders, the others were thinking how to help Armenia and Artsakh.

“Wars are won not only with arms but also with spirit. When the spirit is strong, it is unbreakable,” President Armen Sarkissian said.

He also noted with pride that he feels our pan-national presence in Talish. “Here you have structures built by the AGBU, Hayastan All-Armenian Fund, multiple benefactors. Talish belongs not only to its residents. Talish belongs to all of us, to the entire Armenian nation,” President Sarkissian said.

The President of Armenia handed gifts to the servicemen and freedom fighters – participants of the April War and thanked them for their outstanding service, patriotism, and dedication.

President Armen Sarkissian, who is in Artsakh on a two-day working visit, together with the President of Artsakh Bako Sahakian and Prelate of Artsakh Diocese Pargev Archbishop Martirossian participated today at the unveiling of the monument dedicated to the 17 residents of Maghavouz village in Martakert region who gave their lives in the Artsakh War.

Presidents Armen Sarkissian and Bako Sahakian laid a wreath at the monument and paid tribute to the memory of the residents of Maghavouz killed in the Artsakh and Great Patriotic Wars.

For courage demonstrated during the April, 2016 war, President Bako Sahakian awarded a group of Maghavouz residents with Artsakh state honors.

Afterwards, the Presidents of two Armenian states conversed with the residents of the village present at the event.

In the evening of April 1, President of Armenia Armen Sarkissian, President of Artsakh Bako Sahakian, and Prelate of the Artsakh Diocese Pargev Archbishop Martirossian were present at the concert dedicated to the 15th anniversary of the Artsakh Chamber Music Orchestra which took place at the Culture and Youth Palace in Stepanakert.

The Presidents discussed a wide range of issues related to the cooperation of the two Armenian states.

President Armen Sarkissian, who is in Artsakh on a working visit, on April 2 together with the President of Artsakh Bako Sahakian visited Kataro wine factory in Togh village of Hadrut region.

President Armen Sarkissian accompanied by Bako Sahakian toured the factory where the founder of Kataro Edik Avetissian and his son told about the history of the factory and future programs. The factory is a family business. They named their wine after the Kataro abbey situated on Dizapayt hill.

Edik Avetissian said that they started the production of wine back in 2002. President Sarkissian wished the Avetissian family all the best. Noting that the natural conditions of the village were perfect for wine production, Armen Sarkissian said, “Spirit and love are very important for the success of any undertaking, and you invest them in your production.

The Avetissians offered some wine to President Sarkissian. The testing was concluded with a toast, “Peace to this land and water, let’s remember all heroes who gave their lives for the Fatherland and live in eternity.”

The Presidents of two Armenian states walked in Togh village, which is rich with historical monuments, visited the castle of its ancient rulers-meliks, and around a tea table conversed with the villagers.