Joint declaration on friendly relations, partnership and enhanced cooperation between the Republic of Armenia and the Czech Republic 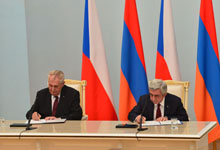 Mindful of long-standing traditions of friendship and cooperation, economic and cultural ties, as well as shared values between the Armenian and the Czech peoples;

Guided by the purposes and principles of the Charter of the United Nations and Helsinki Final Act;

Reaffirming their commitment to promote and protect fundamental freedoms, human rights, democratic principles, the rule of law and good governance;

Conscious of their role and responsibility in contributing to international peace and security, as well as to promote prosperity and sustainable development;

Determined to further expand and strengthen bilateral interactions and enhance the cooperation in multilateral dimension;

Recognizing the importance of continuous support towards deepening of bilateral trade and investment as well as widening of sectoral cooperation in all fields of mutual interest;

Welcoming the established cooperation between the Czech Republic and the Republic of Armenia in the frame of the Eastern Partnership;

Taking note of the progress in implementation of existing bilateral agreements, including those signed during the state visit of the President of the Republic of Armenia Serzh Sargsyan to the Czech Republic in January 2014;

The Armenian and Czech sides (hereinafter referred jointly to as the “Sides”) note with satisfaction the progressive development and broadening of political relations and express a fundamental commitment to further intensify their political dialogue and cooperation, both on bilateral level as well as within the United Nations and other international and regional organizations;

The Sides underline the necessity of holding more regular bilateral visits and consultations on issues of mutual interest;

The Sides reiterate their readiness to reinforce and broaden cooperation within the framework of the European Union initiatives, in the context of the launch of negotiations on a new comprehensive framework agreement covering political, economic and sectoral cooperation between the EU and Armenia, based on shared common values and strong commitment to democracy, human rights and rule of law;

The Armenian Side appreciates the Czech support and contribution towards the Eastern Partnership, as well as for its continuous support to a number of the EU-Armenia projects, including the visa facilitation and promotion of people-to-people contacts;

Both sides express their support to the efforts of the OSCE Minsk Group to resolve the Nagorno-Karabakh conflict and in this respect stress that the conflict should be resolved exclusively by peaceful means, based on the principles of international law, i.a. non-use of force or threat of force, territorial integrity and the equal rights and self-determination of peoples. They reiterate their full support to the mediation efforts by the co-chairs of the Minsk Group on the Nagorno-Karabakh conflict, including at the level of Presidents and their statements since 2009;

The Sides declare their intention to further strengthen, expand and diversify bilateral trade in goods and services as well as investments, including through mutual efforts to improve market access and the flow of goods and services, in accordance with their respective bilateral and multilateral obligations;

The Sides attach special importance to the activities of the Armenian-Czech Intergovernmental Commission on Economic Cooperation, whose recent session was held on the 25-26 April 2016 in Prague;

The Sides underline the importance of maintenance of regular contacts and experience sharing in the spheres of tourism and public administration and to that end express their readiness to facilitate exchange visits of high level officials and expert groups;

The Sides stand ready to expand people-to-people contacts, strengthen cooperation in culture, education, science, tourism, sports and healthcare in order to further enhance mutual understanding and friendship between the two peoples. In this context they highlight the role played by the Armenian community in the Czech Republic in reinforcement of the bilateral relations;

The Sides attach special importance to the established decentralized cooperation and partnership between local authorities, as an additional impetus for the development of bilateral relations;

To this end the Sides wish to extend their assistance for intensification of cultural and educational ties by encouraging visits of groups and individuals representing Armenian and Czech cultures as an important form of communication and enrichment of the two peoples and rendering more support and exchange opportunities for students and young researchers of the both Sides. In this context the Armenian Side expresses its appreciation to the Czech side for the scholarships provided to Armenian students pursuing their education in Czech universities.