President Sarkissian met with the Prime Minister of Japan Shinzō Abe: Future is about cooperation 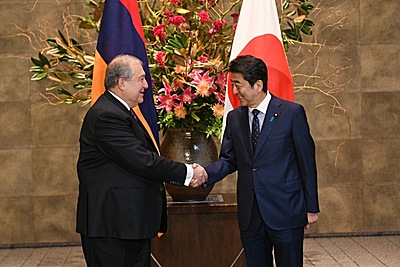 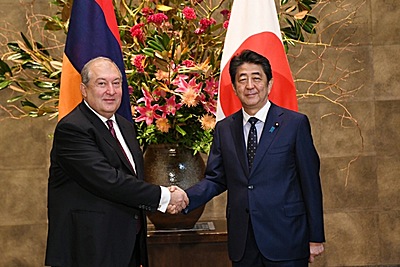 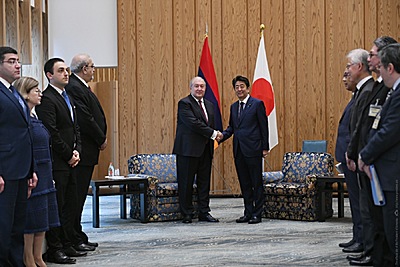 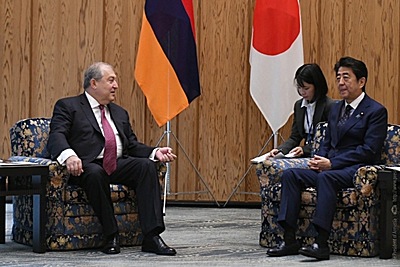 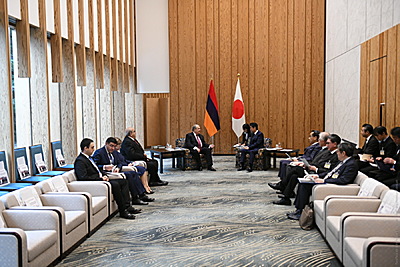 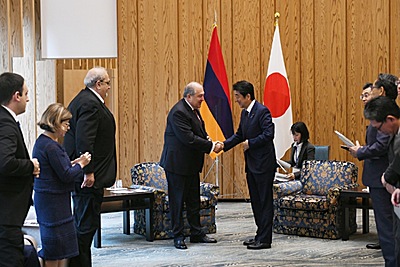 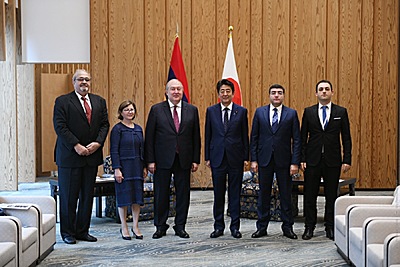 President Armen Sarkissian, who is in Tokyo on a working visit, met today with the Prime Minister of Japan Shinzō Abe.

The Prime Minister of Japan welcomed the participation of the President of Armenia at the enthronement ceremony of Emperor Naruhito and his first visit to Japan as President of the Republic of Armenia. He said that Armenia is an important partner of Japan, and they are interested in the deepening of cooperation. “Armenia has rich history, culture, and traditions. Based on that, you focus on new technologies and innovations looking into the future,” Prime Minister Abe noted.

Expressing thanks for the invitation to participate at the historic event of accession, President Sarkissian said, “Even though we are far away from each other, we are close through our values, our cultures, and history. We are both ancient peoples which in many regards have similarities. And we need to look forward. The future is about cooperation. I am confident that together we can achieve a lot.” Among promising areas of cooperation he mentioned innovation, IT, artificial intelligence, mathematical modeling, management of large volumes of information.

In this context, he presented one of presidential initiatives, the ATOM (Advanced Tomorrow) program which is aimed at the development of technologies and science in Armenia. Along with other objectives, it is directed also at bringing to Armenia major technological and high technology international companies, thus making our country one of the hubs of artificial intelligence and mathematical modeling. “We will be glad to see Japanese companies in our country in the framework of this program,” the President underscored.

Noting that after a devastating earthquake, Japan was among the first to lend a helping hand to Armenia, President Sarkissian said in particular, “Armenia highly values Japan’s assistance to our country in the area of management of emergency situation, fight against natural disasters, prevention of cataclysms.” He also stressed the importance of expanding cooperation in the areas of nuclear safety and regulations, including management of nuclear waste and long-time predictions.

Noting that the two countries have signed the Agreement of liberalization, encouragement and protection of investments which provides practical opportunities, President Sarkissian said that Armenia, which is a member to the EAEU and has a mature banking system, could be viewed as a trade platform. He mentioned food security as a prospective area for cooperation. The Prime Minister of Japan said that the two countries need to learn more about each other and discover each other’s potential. He stressed the importance of notifying the Japanese companies on potential and opportunities of cooperation with Armenia. “It is necessary to alert companies on great potential which Armenia has and inform them that you, as President, are focused on the development of these important areas,” Prime Minister Abe said. Toward that end, he stressed the importance of holding a joint business forum.