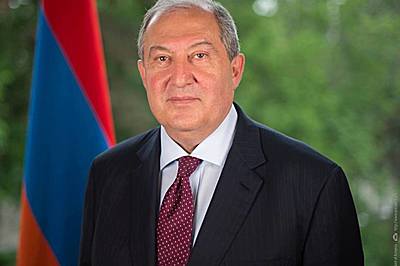 The President of the Republic attaches importance to urgently handling the political crisis due to the dismissal of the Chief of the General Staff of the RA Armed Forces Onik Gasparyan.

With that purpose, meetings were held with the Prime Minister, Colonel-General Onik Gasparyan, and the highest commanding staff of the Armed Forces. The Prime Minister's reasons to refuse the President's objections to the dismissal draft decree were examined.

Obviously, the current situation is a result of disagreements among the political and military figures in the war and post-war periods, sometimes with highly personalized approaches. The legally problematic interpretations, law enforcement practices, and possible gaps in the law, which comprise the basis to object signing the decree, cannot be ignored.

In his previous statements, the President of the Republic stressed that the speedy settlement of the issue within the framework of the Constitution is of primary importance for the security and stability of Armenia and Artsakh. It is indispensable for statehood, prevention of the society’s further division, people’s unity and solidarity, for overcoming the uncertain situation and reaching the final solution.

The President of the Republic decided not to sign the draft decree.

At the same time, guided by Article 169, Part 1, Clause 4 of the Constitution, the President of the Republic will apply to the Constitutional Court with a separate application requesting to determine the conformity of the RA law "On the military service and the status of the servicemen" of November 15, 2017, with the Constitution.

Adhering to his commitment, the President of the Republic will continue the steps aimed at further stabilization of the situation, and calls on everyone, using the institution of the President as a platform, to negotiate and find a comprehensive solution to all existing problems.