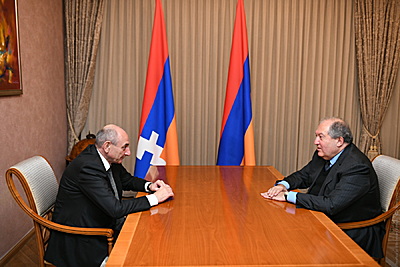 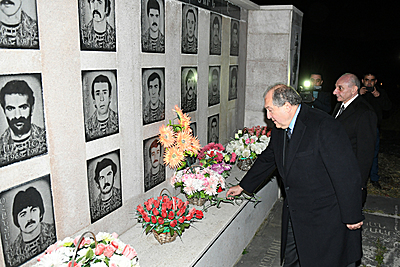 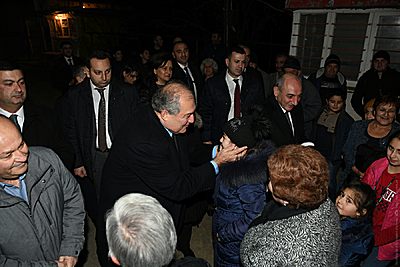 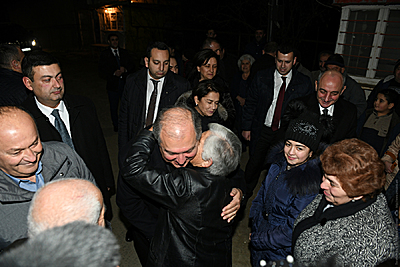 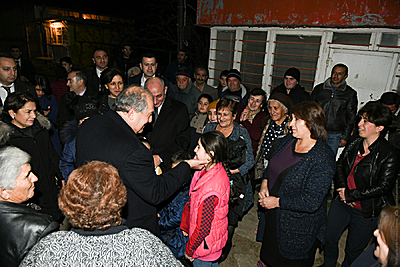 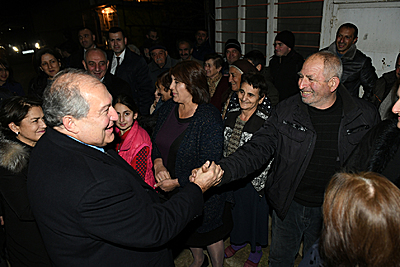 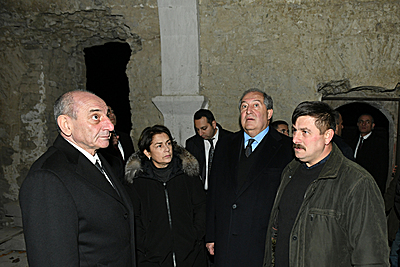 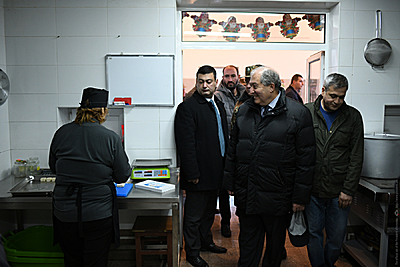 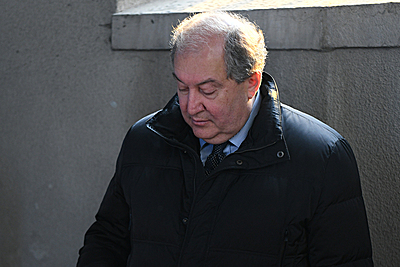 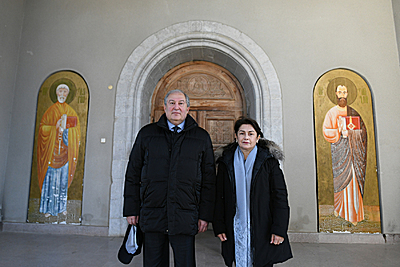 President Armen Sarkissian arrived today to the Republic of Artsakh on a working visit.

In Stepanakert, President Armen Sarkissian met with the President of the Republic of Artsakh Bako Sahakian.

The Presidents discussed a wide range of issues pertinent to the cooperation of the two Armenian states.

President Armen Sarkissian, who is in the Republic of Artsakh on a working visit, together with his spouse Nouneh Sarkissian and President Bako Sahakian last night visited Harav village of Askeran region.

First, they paid tribute and laid flowers at the memorial dedicated to the victims of the Great Patriotic War and Artsakh Liberation War.

Afterwards, President Sarkissian conversed with the residents and toured the community. Recently, the illumination works have been completed here through the financing of the Hayastan All-Armenian Fund and now the community has its illumination system.

The head of the community Andranik Ghazarian informed the President on the accomplished works. President Sarkissian visited the Sourb Mesrop Church of the village and observed the current conditions of the church which was built in the 18th century. After the tour, President Armen Sarkissian was hosted at the Qaramians family. “I am glad to be here today. Each village in Artsakh has its own history and heroes. Everyone has to bow the head before entering each village: first bow to the heroes and then to those who keep their families here, have grand and grand grandchildren and continue to build this country,” the President said. “Together with President Bako Sahakian we paid tribute to the memory of the heroes, and now here, in your person, we bow to all residents of Harav. We bow to all people of Artsakh because in a sense, you are the outpost of our nation. When you are calm and confident, are building a town here, we are confident too, that Karabakh will be what it has been for centuries and will stay as it is.”

President Armen Sarkissian, who is in the Republic of Artsakh on a working visit, was today at a detached N engineering-demining division of the Defense Army.

The President conversed with the troops and officers on duty, familiarized with their social and living conditions, and new arrangements in the food supply.

Responding to the questions of the journalists, the President noted that he had nice impressions of the tour and particularly of the new arrangements for the food supply of the troops.

“It is important that today the troops have the option of choosing their food and eating healthy. Food and hygiene are extremely important for soldiers. The structure initially was not built as a barrack and subsequently has some deficiencies which will be rectified gradually. The construction and demining services in our Army are very important thus we all have to help our deminers and engineers to do their work properly,” the President said. “The troops I met with were glad they are in service; they are proud that they are serving in Artsakh.”

President Armen Sarkissian, who is in the Republic of Artsakh on a working visit, together with his spouse Mrs. Nouneh Sarkissian was hosted today at the Grigori Gabrieliants State Geological Museum of Shushi.

Accompanied by the founder of the Museum, Professor Gabrieliants they familiarized with the samples of the stones brought here from more than 40 countries of the world and the collection of rare minerals, their origin, and history.

The Museum has nearly 500 exhibits part of which originated in Artsakh, the other part represents mostly the personal collection of Grigori Gabrieliants who has donated it to the Museum.