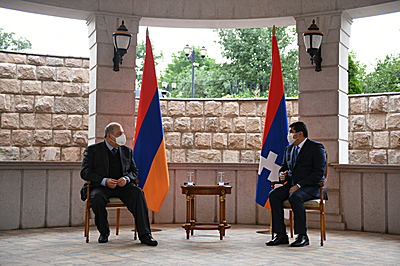 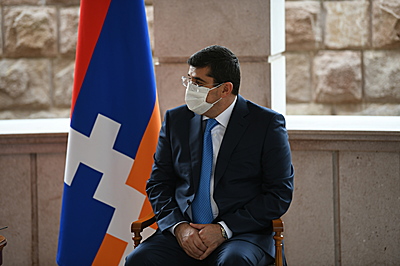 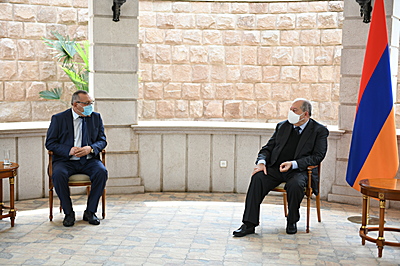 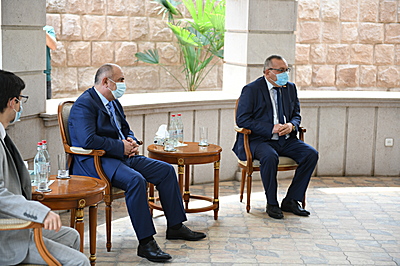 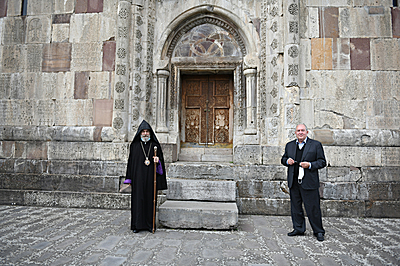 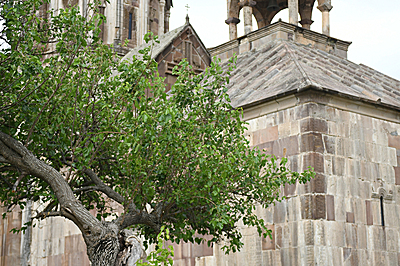 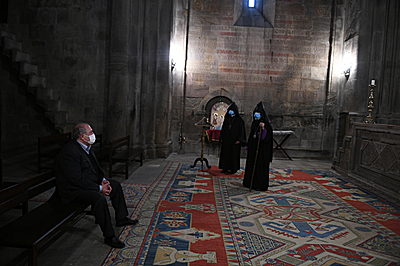 President Armen Sarkissian arrived today to Artsakh on a working visit. In Stepanakert, he met with the President of the Republic of Artsakh Araik Harutyunian.

President Sarkissian congratulated once again and wished success to Araik Harutyunian and expressed confidence that with his experience and knowledge he would successfully continue his service to the Fatherland. “In your person, I would also like to congratulate the people of Artsakh because both presidential and parliamentary elections were held in a democratic manner,” the President said and added, “convey my thanks also to other members of the presidential elections who didn’t win individually but won collectively and showed to the world that Artsakh in not only stout and strong but also a democratic and a free country which holds free elections. They ought to be proud since they had their contribution to the process. I want to wish you and all citizens of Artsakh first of all health. I am confidence that we will overcome this difficult situation too, and will move forward, making both the Republic of Armenia and Republic of Artsakh stronger.”

The President of Artsakh expressed thanks and noted that some of the participants of the presidential elections currently have become part of the political authorities and are ready to work for the advancement and development of the country. And those, who are not involved, also continue to work for Artsakh. Araik Harutyunian expressed gratitude to the authorities of Armenia for supporting programs aimed at Artsakh’s development. “I would like to note that together we will be able not only to overcome this situation but also ensure progress in our country’s development.”

At the meeting, discussed were the ongoing and future projects aimed at the strengthening and development of the Republic of Artsakh.

The private meeting of the President of Armenia Armen Sarkissian and President of the Republic of Artsakh Araik Harutyunian was followed by a meeting in the extended format with the participation of the Speaker of Artsakh’s National Assembly Arthur Tovmassian, state minister Grigori Martirossian, Minister of Foreign Affairs Masis Mailian, Secretary of the Security Council Samvel Babayan, other officials.

At the meeting discussed were issues pertinent to cooperation between Armenia and Artsakh, programs aimed at Artsakh’s development.

”Beloved citizens of the Republic of Artsakh, my dear compatriots. First, I would like to remind that in Armenia and in Artsakh the coronavirus infection level is still high and I urge everyone to observe all possible protective measures to stay healthy,” the President of Armenia said today at the meeting with the journalists, addressing the people of Artsakh.

President Sarkissian noted that this was his first visit to Artsakh after the presidential and parliamentary elections, “I met with the new leadership of Artsakh in Yerevan, and today I am here to congratulate the newly elected president and, at the same time, Armenians of Artsakh, all citizens of the Republic of Artsakh on the occasion of the parliamentary and presidential elections held on a very high level, also those, who participated to the elections, didn’t win but proved through their participation that Artsakh is a free and democratic country and is able to hold elections in line with the highest standards.”

President Sarkissian viewed meetings held in Stepanakert as very productive and noted that unity was the key topic of the discussions. “After the elections, Artsakh demonstrated unity in a sense that different political forces have been united in one government and will serve their Fatherland, our Fatherland – the Republic of Artsakh,” Armen Sarkissian underscored. “We spoke also about development in different areas. I believe, there is one option for Artsakh’s future development and that option is to be and remain a strong state. The Artsakh problem has no other solution except for a strong Artsakh, while a strong Artsakh rests on four pillars. First is patriotism and strong will of the Armenians of Artsakh which leads patriotism of the entire Armenian nation in the Republic of Armenia and in Diaspora, and dedication to Artsakh and Artsakh’s just demand.

The second pillar I believe, is the Army. Artsakh has had and today too, has a victorious army and we must do everything for the army to remain one of those main pillars.

The third pillar is Artsakh’s economy: strong Artsakh should have a strong economy and agriculture is the core of it. We’ve had a detailed and practical discussions on that with the President of Artsakh on how the President of the Republic of Armenia and his colleagues can help and be useful to Artsakh, to develop the country’s economy.

The fourth pillar is democracy. Artsakh is a state which is able to sustain a 2-3 times bigger population which means a manifold bigger economy, thus, a bigger army.”

President Sarkissian assessed his visit as very productive and noted, “I want you to be confident that the President of Armenia, the Prime Minister and the government – we all stand by Artsakh and will do everything necessary for the Republic of Artsakh to develop as a free, democratic, and strong country.”

Speaking of the prospects of development of Artsakh, President Armen Sarkissian stressed on multiple occasions the demographic issue and noted that it is too, an important factor in the resolution of the security, political, economic, and many other issues.

According to the President, Artsakh has abundant resources to increase its human capital manifold and develop further.

During his working visit to the Republic of Artsakh, President Sarkissian highlighted once again the demographic issue and said that Artsakh is a state which can have a 2-3 times bigger population which means a many-times bigger economy. As a practical step in that direction, President Armen Sarkissian said that he would assist through his personal means to the refurbishment of the maternity hospital in Stepanakert.

In the framework of his working visit to the Republic of Artsakh, President Armen Sarkissian, accompanied by the Primate of the Diocese of Artsakh of the Armenian Apostolic Church Archbishop Martirossian, visited the Gandzasar monastery compound. The President toured the medieval compound, lit a candle and prayed.