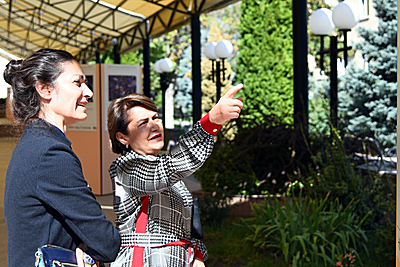 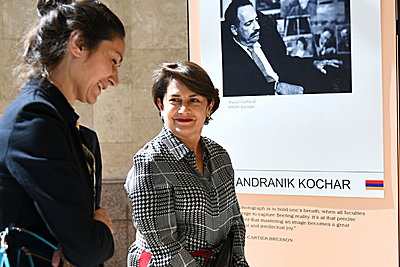 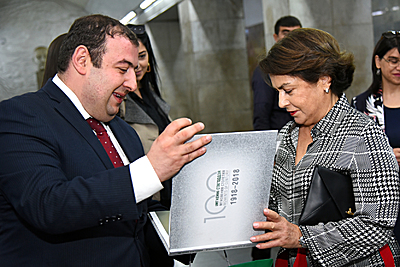 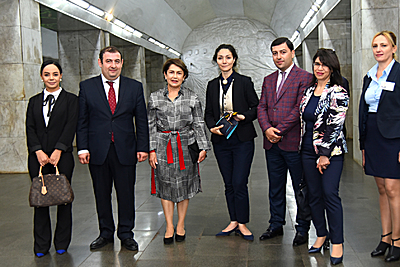 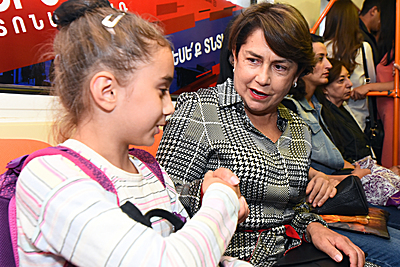 The spouse of the President of Armenia Nouneh Sarkissian today observed a series of exhibitions organized in the framework of the First Armenian International Photofestival.

Accompanied by the founder of the Photofestival Tatev Mnatsakanian, Mrs. Nouneh Sarkissian watched the exhibition named “Historical Legacy of the Armenian Photography” which was opened on the territory adjacent to the Presidential Palace.

It comprises the works of the world famous Armenian photographers Abdullah brothers, Antoine Sevryugin, Jusuf Qarsh, Ida Kar, Ara Guler, Vladimir Musaelian, Harry Kundakjian, and others. Afterwards, Mrs. Sarkissian visited Marshal Baghramian, Yeritasardakan, Republic of Armenia stations of the Yerevan metro and familiarized with the expositions organized at the mentioned metro stations in the framework of the Photofestival.

Belta agency from Belarus presented at Marshal Baghramian station photos dedicated to the Belurasian holidays and rituals. The Director of Armenpress agency, which is a partner of Belta, Aram Ananian introduced the presented pieces and informed that photographs of Armenpress are being demonstrated currently in Belarus. At another platform of the Photofestival, Yeritasardakan station, Mrs. Sarkissian was greeted by the famous photographer Hakop Berberian who showed her his photos from the sport life. Mrs. Sarkissian’s tour ended at the Republic of Armenia station where the three award winning works of the Photofestival from Armenia, India, and Iran are on display as well as other works of the photographers from other countries participating at the festival.

At the counclusion of the visit, Mrs. Sarkissian said that she was impressed with the exhibition, “In the past, photography was pereceived as a craft, but today it’s an art, a form of art. Art specialiasts sometimes see the future of the arts in photography. It would be nice if other exhibitions are organized at the metro stations in the future. It is an excellent esthetical education for children, schoolchildren, and artistic delight for the adults,” she said.