Mrs. Nouneh Sarkissian visited the Matenadaran and got acquainted with the programs and current work 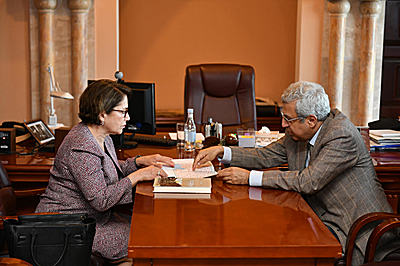 The President’s spouse Mrs. Nouneh Sarkissian visited the Matenadaran, the Research Institute of Ancient Manuscripts after Mesrop Mashtots, and got acquainted with the programs and projects implemented by the Institute.

In the conversation with the director of the Matenadaran Vahan Ter-Ghevondyan, they touched upon the problems and priorities of the sphere. Noting that there is a demand for some professions in Armenia, in particular, restorers, medieval scholars, exhibition curators, they underscored as essential the issue of training such specialists in our country.

Vahan Ter-Ghevondyan presented the new publications and informed Mrs. Sarkissian that an album about the medieval manuscript heritage of Artsakh and Utik is prepared to be published.

Emphasizing the role of the Matenadaran in preserving and popularizing the Armenian cultural heritage and making it more visible to the world, Mrs. Sarkissian expressed her readiness to support it. They underscored the importance of cultural diplomacy. With particular warmth, Mrs. Sarkissian remembered her years working at the Matenadaran, and especially the devoted work of the then director, academician Levon Khachikyan.

Together with the director Vahan Ter-Ghevondyan, Mrs. Nouneh Sarkissian visited the manuscript depository of the Matenadaran and got acquainted with the works of her ancestors, famous 19th-century public figures, and folklorists, brothers Aristakes and Jeremiah Tevkants.