He was a devoted son of his country and people. Adviser to the President of the Republic Hamlet Gasparyan passed away 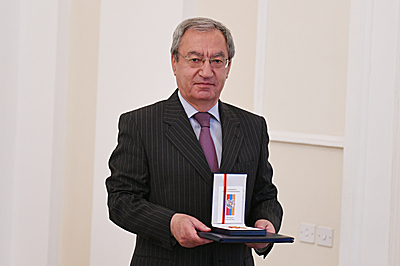 Hamlet Gasparyan was the devoted son of his country and people. He was like that in his life, throughout his career and in his relations with people.

Hamlet Gasparyan had a special love and sympathy for Charles Aznavour. Almost all the books by Aznavour and about Aznavour, available to the reader in Armenian, bear the stamp of Hamlet Gasparyan's tireless work.

Hamlet Gasparyan's school of journalism was a unique master class, which was attended by many journalists, who are still well-known figures in the Armenian media.

He was a true professional, a dignified state official, an honest friend, and a devoted father in his family.

The Office of the President of the Republic extends condolences to Hamlet Gasparyan's family, relatives, and friends, sharing their grief.

Hamlet Gasparyan was born in the village of Achajur, Tavush region, on May 20, 1950.

He graduated from the Romance-German Philology Department at the Yerevan State University in 1974.

He participated in the Karabakh movement and joined the "Armenian National Defense Society."

He worked for independent publishers and newspapers ("Hay Dat", "Hay Ashkharh") in 1988.

In 1989-1990, he was the deputy editor of "Hay Ashkharh" newspaper.In the same period, he participated in the foundation of the newspaper “Azg,” and until April 1995, he worked as the Deputy Editor-in-Chief of the daily.

During that time, as a journalist, he repeatedly covered the foreign visits of Armenia’s leadership and Armenian delegations.

In 1995, he started working at the RA Ministry of Foreign Affairs.

In 1996-1997, he worked as First Secretary at the European Department of the Ministry of Foreign Affairs.

In 1997-1998, he was the General Director of the National Television of Armenia.

In 2005, Hamlet Gasparyan received the diplomatic rank of Ambassador Extraordinary and Plenipotentiary.

On February 12, 2018, he was appointed adviser of the Minister of Foreign Affairs and head of the RA MFA Political Planning Department.

By the decree of the President of the Republic, Hamlet Gasparyan was awarded the Mkhitar Gosh Medal in May 2020.