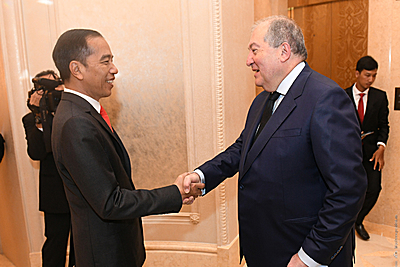 On the occasion of Armenia’s Independence Day, President Armen Sarkissian received congratulations from the President of Indonesia Joko Widodo.

Underscoring that this year marks the 28th anniversary of the establishment of diplomatic relations between Armenia and Indonesia, President Widodo expressed confidence that bilateral relations would continue to develop.

The President of Indonesia recalled the meeting with President Sarkissian in January, 2020 in the United Arab Emirates during which an agreement was reached to cooperate in the areas of IT, creative education, and innovations. He expressed hope that the two countries would call the life the initiative aimed at boosting bilateral cooperation.

President Joko Widodo conveyed his good wished to President Sarkissian and the people of Armenia.