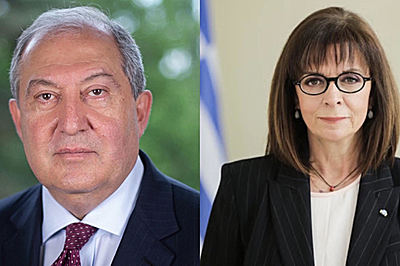 President of the Republic Armen Sarkissian sent a congratulatory message to the President of the Hellenic Republic Katerina Sakellaropoulous on the occasion of the national holiday of the Greek Independence Day and the 200th anniversary of liberating from the yoke of the Ottoman Empire.

"The Greek people gained their independence at the price of heroic fights, long struggle, and sacrifice. Along that path, there were numerous manifestations of cooperation and joint struggle, which were based on millennia-old historical and cultural relations, common spiritual values, and mutual sympathy of the Armenians and Greeks, these two Christian peoples who shared the same fate under the Ottoman rule.

In the last decades, Armenia and Greece developed solid interstate relations and a stable bilateral agenda with active political dialogues and cooperation in various fields.

The role of the active Armenian community in Greece, and the Greek community, which enjoys love and respect in Armenia, is significant in further strengthening the relations between our countries."

The President of Armenia expressed confidence that the warm, friendly ties and the sincere, efficient cooperation between the two countries will further develop and strengthen for the benefit of the Armenian and Greek peoples.