Our country is ready to expand mutually beneficial cooperation in various spheres. President Armen Sarkissian sent a congratulatory message to the President of Bulgaria 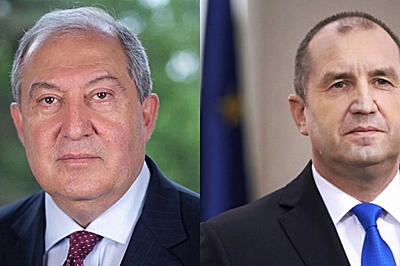 The President of Armenia Armen Sarkissian sent a congratulatory message to the President of the Republic of Bulgaria Rumen Radev on the 30th anniversary of the establishment of diplomatic relations between Armenia and Bulgaria.

"Over the past years, the cooperation between Armenia and Bulgaria has continuously developed in the political, economic, cultural, educational, and other spheres, greatly facilitated by the existing rich agreement-based legal field.

Our country is ready to expand mutually beneficial cooperation in various fields, including within the framework of the Armenia-EU Comprehensive and Enhanced Partnership Agreement.

The cooperation established between the two countries in the educational and cultural spheres is significant, the vivid manifestation of which is teaching Armenian at Sofia University of St. Clement of Ohrid, and Bulgarian at Brusov State University in Yerevan."