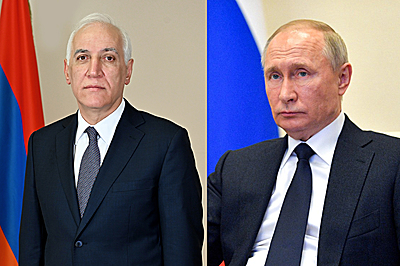 President of the Republic Vahagn Khachaturyan sent a congratulatory message to the President of the Russian Federation Vladimir Putin on the 30th anniversary of the establishment of diplomatic relations between Armenia and Russia.

President Khachaturyan's message particularly says: "This significant event in the centuries-old history of Armenian-Russian friendship, brotherhood and mutual support opened a qualitatively new stage, laid the foundation for the allied strategic partnership between Armenia and Russia, covering all spheres of interstate cooperation.

The Treaty on Friendship, Cooperation and Mutual Assistance, signed between the Republic of Armenia and the Russian Federation (celebrating 25 years this August) and the joint Declaration on Allied Partnership, oriented towards the 21st century, form a well-established legal basis.

Today, the Armenian-Russian strategic cooperation stands out for a highly trustful dialogue at all levels, and effective cooperation in the military-technical, trade-economic and humanitarian spheres.

Our countries cooperate within the framework of the EEU, CSTO, CIS and other multilateral alliances.