Working visit of the President Armen Sarkissian to Ararat marz 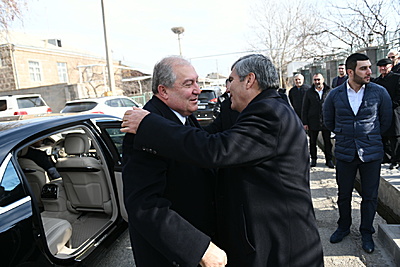 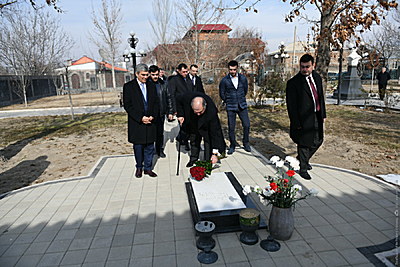 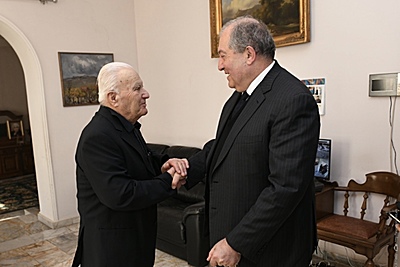 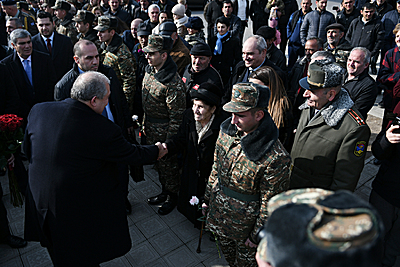 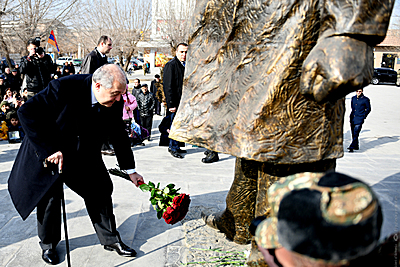 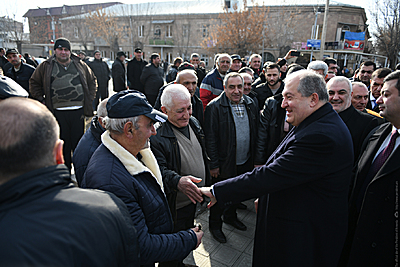 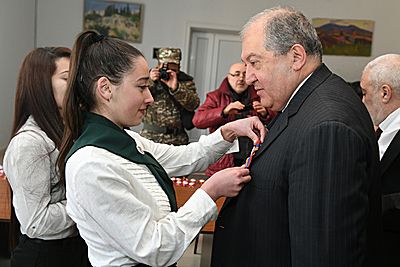 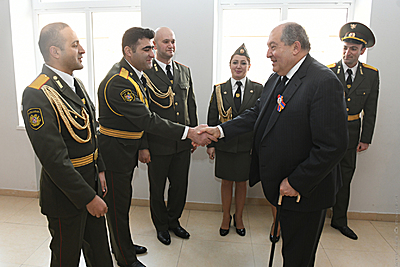 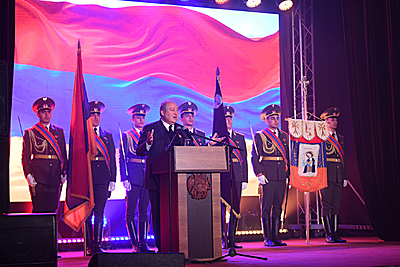 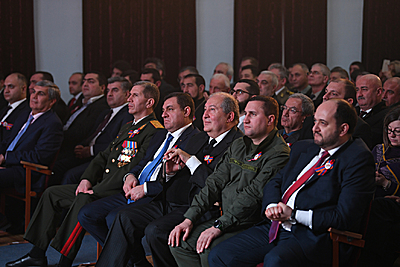 The President laid flowers at the memorial dedicated to Vazgen Sargsyan and at the tomb of his mother, Greta Sargsyan.

Later, in a warm familial atmosphere he conversed genially with the father of Vazgen Sargyan, Zaven Sargsyan and his brothers, Armen and Aram Sargsyans and congratulated them on the occasion of the Army Day and the 28th anniversary of the formation of the Armed Forces of the Republic of Armenia. The interlocutors told memories of the Sparapet, recalled multiple episodes related to his life and work.

President Armen Sarkissian today, on the occasion of the Army Day at Ararat marz participated to a festive event dedicated to the 28th anniversary of the creation of the Armed Forces of the Republic of Armenia.

In Ararat, President Armen Sarkissian laid flowers at the memorial of Armenia’s National Hero, Hero of Artsakh Vazgen Sargsyan and paid tribute to his memory. Afterwards, President Sarkissian participated to the gathering dedicated to the 25th anniversary of the creation of the Armed Forces of the Republic of Armenia.

The President of Armenia congratulated all those present on the occasion of the Army Day and said in particular, “I want to wish our Army, our troops, our entire nation to enjoy in the coming years peace which is a result of our Army’s diligent daily work. If peace is breached, we as citizens of the Republic of Armenia and as the Armenian nation have only one prospect – a new victory. There is no alternative since from day one of its creation our Army carries the spirit of victory within.

Our Army is our baby which we longed for centuries. There was no statehood for hundreds of years but that dream lived in each of us to have a state one day and a victorious army. That dream was expressed in historical novels, legends, true stories, in the stories about heroes, who were sanctified – from Tigran Mets to Vardan Mamikonian. Each of us always had a dream of having a strong army. At the end of the 19th century, when the Armenian nation was divided among three and later between two empires, that dream was becoming stronger by day. At the end of the 19th century, our nation, living under oppression and torture, raised its voice in a daily struggle for survival but the voice got mixed up with the voices of different nations of the world and wasn’t heard.

The greatest outcry, the protest of heart and soul our people manifested in 1915, during the Great Eghern. In those years, our voice was heard in the commotion of the World War but was not distinguished by the great powers. In its turn, it fortified our common dream to have our own state and our own army, to hold our future in our own hands, to be able to defend ourselves, to shape our future and raise our voices to exclaim “Long live the Armenian Army!” These dreams started to become true in Sardarapat, Bash Aparan, Karakilisa, and certainly, later when part of historical Armenia became Soviet Armenia. I certainly want to acknowledge also the heroes of the First Republic. Today, I laid flowers on the tomb of Andranik Zoravar to express our common and my personal gratitude to all our heroes – to freedom fighters, fidains, Armenian colonels, who served at the Russian imperial army, officers and generals, who came back to the Fatherland and served our country.

Later, there came Soviet times: World War II. Six hundred thousand Armenian participated to that war and 300,000 of them gave their lives to fight fascism, to defend their native land, to liberate Europe. They gave their lives probably knowing that had we surrendered Stalingrad, the Turkish Army would penetrate Armenia and would try to finish whatever they had not been able to do in 1915. We must be proud because we have our unique place in the victory in WWII.

The 1990s, the beginning of the 20th century: struggle for freedom, independence, and Artsakh. Our dream that we would have a free and independent state and strong army was very close. The birth of the Army was like the birth of a child, in labor.

In a sense, our Army was born here, in Ararat. I am talking about first battles which took place on the territory of the Republic of Armenia. Many of you, residents of Eraskh, Ararat the same day became freedom fighters, the backbone of our future Army. You proved your strength, and the enemy suffered one of its first defeats.”

President Sarkissian noted that coming to Ararat, he would be remise not to visit first the home of his friend, Vazgen Sargsyan. The President said that at the beginning of 1990s, during his diplomatic service, he had familiarized with the history of many armies, sent certain information, ideas, proposals and often even some devises to Armenia and Artsakh. “In a certain way, Vazgen Sargsyan and I were comrades-in-arms,” President Sarkissian said. “Visiting Ararat, I should have come to the home where the Sparapet, my friend, was born. In truth, our Army carries the spirit of Vazgen Sargsyan. It is no accident that on December 5, 1991, by the decree of the President of Armenia Vazgen Sargsyan was appointed Minister of Defense, Minister of the Ministry which was not in existence yet. By the decision of the government of Armenia, next year, on January 28 the Ministry of Defense was created: our Army now had a legal base. From day one, Vazgen put his spirit, boundless optimism, quick temper, absolute faith, dedication, and very often his tsunami-like, contradictory nature into the task of achieving victory.

Army has two main components: one of them, in my opinion, is the spirit of the army, the other is its mind. To win, it is necessary to put these two together. In the 21st century only the army, which has not only spirit but also mind, will be victorious. For years, we were communicating with Vazgen, I was conveying him information constantly. Voluminous documents I was sending him, related to this or that country, army structure, were not only read by Vazgen but also we used to have lengthy discussions about. Vazgen was both – the mind and the spirit. That spirit he passed on to the Army, as well as his mind. This Army cannot fail. Our Army is not only victorious but also winning. We all must be proud to have one of the best armies in the world. This is not just a sentimental statement; I believe in that unconditionally. My years-long experience has proved it.”

President Sarkissian expressed his deep gratitude to all those who sacrificed their lives for Armenia’s and Artsakh’s freedom and requested a moment of silence for our heroes.

“I look into future with great optimism. I am confident that the 21st century will be our nation’s century – the century of a small country but global nation, when every Armenian, regardless of where they live, will bring their contribution,” President Sarkissian said in his remarks. “I believe that in the 21st century, natural resources will not be important but human capital, minds, and our people have multiple opportunities to be among the leaders. The world is changing: instead of seas there will be information seas, instead of oil there will be new technologies, instead of pure enthusiasm will be pure mind. In the 21st century we have to exercise our mind, all opportunities provided by the modern technologies, science and devices first and foremost to empower our Army. I am confident that this time too, we will be successful.

I am confident that twenty-eight years from now, the next President of Armenia will come here, to Ararat and will stand on a much higher podium because the marz will be much bigger and prosperous, will remember the legendary giants who built our Army, will remember you, who kept our Fatherland strong and will say proudly, ”Long live the Republic of Armenia, long live Artsakh, long live the victorious Armenian Army!”