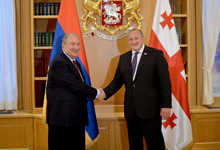 At the invitation of the President of Georgia Giorgi Margvelashvili, President Armen Sarkissian, accompanied by his spouse Nune Sarkissian, has arrived today to Tbilisi to attend the celebrations dedicated to the 100th anniversary of the First Republic of Georgia

President Armen Sarkissian, who has arrived to Tbilisi on a working visit, today had a tete-a-tete meeting with the Prime Minister of Georgia Georgi Kvirikashvili. Later, delegations met in the extended format.

President Sarkissian expressed gratitude for the invitation to attend events dedicated to the 100th anniversary of the restoration of the Georgian Statehood and the warm welcome. He also said that on May 28, Armenia will be celebrating the centennial of the First Republic.

The President of Armenia and Prime Minister of Georgia noted with satisfaction that the relations between the two brotherly states which are developing dynamically and are strengthening by year. He added that we are proud of the common history throughout which we have learned from each other and today are happy for each other’s success.

During the warm and cordial conversation, the parties stressed the importance of a continuous development and deepening of the relations in the atmosphere of mutual trust, as well as the need to fully utilize the existing potential. According to President Sarkissian and Prime Minister Kvirikashvili, high-level Armenian-Georgian contacts create good prerequisites for identifying new areas of cooperation. They stressed particularly the importance of cooperation in the areas of tourism, energy, IT, and a number of other areas.

At the meeting discussed were also changed that recently have taken place in Armenia. Noting with satisfaction the civilized and peaceful resolution of the situation, the Prime Minister of Georgia highlighted the role and efforts of President Sarkissian in the process and noted that Georgia is interested in stability at the neighboring country.
President Sarkissian in his turn noted that all joint programs will not only be implemented but will be augmented with new ones. “We are interested in using to its utmost potential existing in different areas of our relations,” the President of Armenia underscored.

President Armen Sarkissian, who has arrived to Tbilisi at the invitation of the Georgian President, met today with President Giorgi Margvelashvili.

Armen Sarkissian thanked the President of Georgia for the invitation to take part at the celebrations dedicated to the 100th anniversary of the restoration of the Georgian Statehood and the warm welcome. He said that in a few days Armenia will be celebrating the centennial of the First Republic. According to the President, these historic for the two nations anniversaries are based on the idea of freedom which remains a guiding principle today as well. President Sarkissian assessed the Armenian-Georgian bilateral relations as good-neighborly which continue to develop dynamically in the atmosphere of trust. “The active interstate dialogue, which is anchored in the traditional friendship and historically mutual understanding between our peoples, creates solid prerequisite for identifying new directions of cooperation,” President Armen Sarkissian said.

The two Presidents spoke also about the recent changes in Armenia and prospects for the development of the Armenian-Georgian relations. They expressed confidence that through joint efforts the parties will be able not only to preserve current achievements but also to boost the mutually beneficial cooperation, elevating it to a qualitatively new level.
During the warm and candid conversation, the President of Armenia invited his Georgian colleague to conduct a visit to Armenia.

President Armen Sarkissian, who is in Tbilisi on a working visit, on May 26 met with the President of Finland Sauli Niinistö.

Noting that last year Armenia and Finland celebrated the quarter of a century since the establishment of diplomatic relations, President Sarkissian observed with satisfaction that during the mentioned period of time the Armenian-Finnish relations have been developing steadily. Armen Sarkissian stressed the importance of the continuous high-level political dialogue and invited his Finnish counterpart to conduct a visit to Armenia.
According to President Sarkissian, Armenia and Finland – two small countries, have many things in common which might become a good base for expanding the framework of cooperation.

The President of Finland said that they were following closely the recent changes in Armenia and were happy for the civilized and peaceful resolution of the situation.
At the meeting, the parties spoke about prospects of cooperation in the framework of the signed by Armenia and EU Comprehensive and Enhanced Partnership Agreement and exchanged views on the regional and international issues.

On May 26, President Armen Sarkissian was present at the festive event dedicated to the 100th anniversary of the First Democratic Republic of Georgia which took place at the Independence Square in Tbilisi.

In his remarks, the President of Armenia warmly congratulated the friendly people of Georgia on the occasion of National holiday – the 100th anniversary of the restoration of state independence and noted that it was an honor for him to be present on that wonderful day here where Georgians and Armenians share the same glorious holiday, “in two days, on May 28 my country too will be celebrating the centennial of the First Republic.”

According to the President of Armenia, our two nations – Georgians and Armenians, have a history of not centuries but millennia and the two nations have multiple common features.
“We share a lot of things. Georgians and Armenians live like brothers and sisters and it’s a fact, a wonderful fact that two nations have lived side by side for centuries, fought together for their independence and dignity and never had a major conflict or misunderstanding. This is of great value for us and an example for new generation which live in Armenia and Georgia,” the President of Armenia underscored.
Armen Sarkissian expressed gratitude for the invitation to participated at the splendid celebration and for the warm welcome extended to the Armenian delegation. He thanked particularly the amazing city – Tbilisi. Through many years, Tbilisi, “Tiflis” was the cultural center of the South Caucasus. This is a city, where Armenians, Georgians and many other nations lived together in harmony, sharing their daily life, culture, good and certainly Georgians and Armenians share the same faith - both of them were standing at the origins of Christianity.

President Sarkissian said that Tbilisi is special for him also because part of his family - grandparents of his wife - originated from this town. Tbilisi shares common features with many cultures; this is a city, where along with Georgian, many other languages are spoken, including Armenian.

President Sarkissian continued his speech in Armenian. He said, “For our two nations, these historical anniversaries are anchored in the idea of freedom, which remains a guiding idea for us today too
.
Today’s realities compel us to not only preserve but also develop and multiply our assets and achievements, create something new which will be worthy of remembering and, why not, replicating. All our efforts of solving conflicts peacefully, of making the South Caucasus region a developed and peaceful place emanate from the values we live by.”
In conclusion, the President of Armenia once again congratulated the Georgian people on the occasion of the momentous jubilee and wished the country peace, prosperity, and all the best.

President Armen Sarkissian, who is in Tbilisi to participate at the celebrations dedicated to the 100th anniversary of the First Democratic Republic of Georgia, together with other heads of state participated at the “Cooperation for Prosperity – Strategizing Next Centennial” roundtable. In his remarks the President of Armenia underscored, “Cooperation for prosperity should be aimed at a peaceful resolution of conflicts and full cooperation should become the driving force and a vision for the countries of the South Caucasus.” He said that next one hundred years for the South Caucasus should become the period of leaving problems behind, of eliminating dividing lines through a beneficial cooperation. According to Armen Sarkissian, the existing reality and the dynamics of the developments in the countries of the region inspire with hope that processes of democratization will promote region’s integration, establishment of durable peace and economic advancement. The President of Armenia expressed confidence that through joint efforts, it will be possible to not only to eliminate economic, political and geopolitical disagreements, which are hampering cooperation, but also to establish tolerance, mutually beneficial cooperation and good-neighborly ties in all areas.

In the framework of the events dedicated to the 100th anniversary of the First Georgian Republic, President Armen Sarkissian held conversations with the President of the European Commission Jean Claude Juncker, President of Slovakia Andrej Kiska, President of Latvia Raimonds Vējonis, President of Lithuania Dalia Grybauskaitė.

President Armen Sarkissian, who is in Tbilisi to attend celebrations dedicated to the 100th anniversary of the Frist Democratic Georgian Republic, on May 26 visited the diocese of the Armenian Church in Georgia the Saint Gevorg Church. The President met also with the representatives of the Armenian community of Georgia.
Addressing the audience, President Sarkissian said that he has arrived to Georgia as a representative of the Armenian people to congratulate our Georgian friends on the occasion of the 100th anniversary of independence.

Armen Sarkissian reminded that the first government of the First Armenian Republic was created in Georgia and the Declaration of Independence was born in this town which was the cultural, spiritual and political center of the Armenian nation.

The President said, “I will never forget the warmness and affection I see in your eyes. Today, as President I am here for the first time, but this is not going to be the last time; you will see me often and many of you often will be my guests in Yerevan. In the temple such as this one, one thinks of spiritual power, of the immortality of the Armenian spirit. We lived far away from our Fatherland for centuries, with no statehood but were dreaming of it. Nevertheless, we have preserved our culture for centuries, the Armenian faith, education of the Armenian children. We preserved all of it for this day. God guided us towards a free and independence Fatherland. And what we have in Armenia today, is the outburst of our spirit and culture that had been accumulating for hundreds of years.”

The President of Armenia spoke also about the recent changes in Armenia and noted that they create political and economic prospects for our country. Addressing those gathered in the Armenian Church, he said, “Each and every one of you can be proud today because Armenia has proved that it is one of those unique countries which can achieve immense changes, which many call a revolution, a velvet revolution…I would call it an Armenian style revolution, not a drop of blood shed. The time has come to build the Motherland we deserve.”

According to Armen Sarkissian, we are a small country but a global nation. We are global through our spirit, our culture, and the influence we have in the world. The Armenians of Georgia, who have been living here for centuries, have contributed greatly to the development of the Armenian culture. He said, “Tbilisi is a birthplace and home town for a vast layer of our culture which has many famous names. Huge contribution they have made to our culture and education make all us proud.”