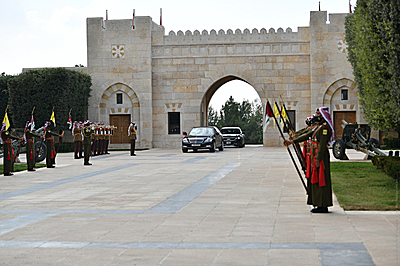 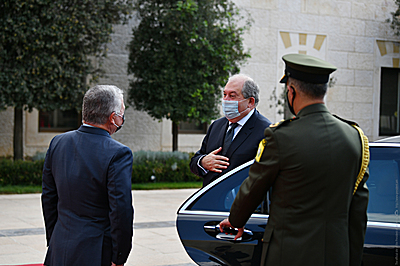 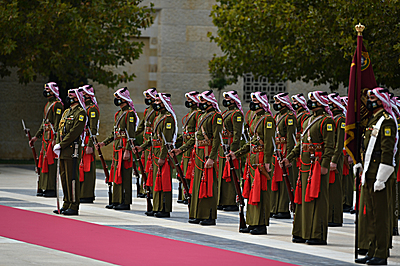 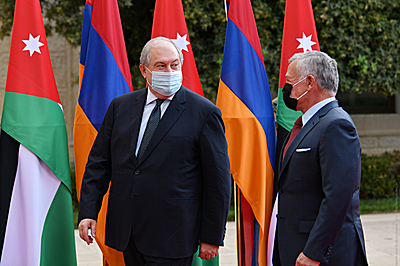 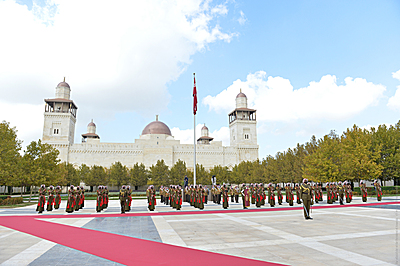 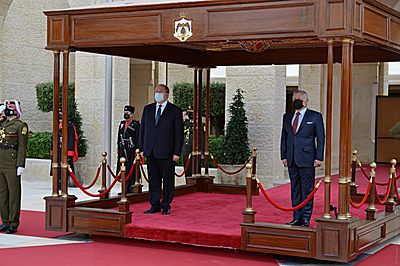 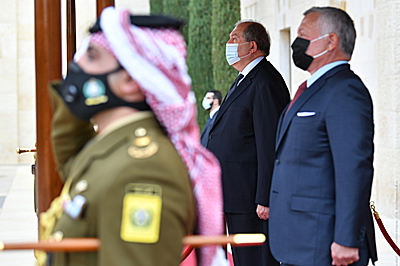 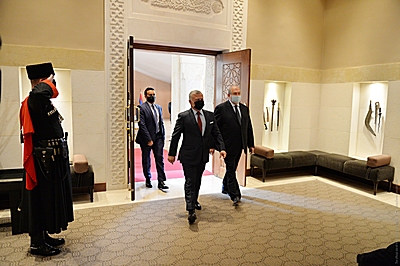 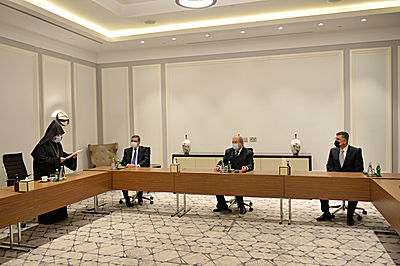 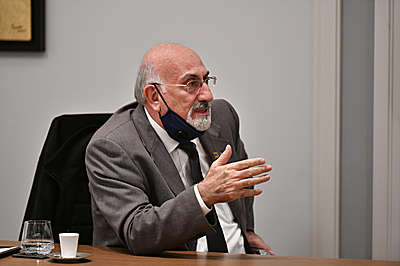 The short working visit of the President of the Republic of Armenia Armen Sarkissian to the Hashemite Kingdom of Jordan has started.

The President of Armenia continues to meet with the leaders of different countries of the Arab world to reaffirm our friendship and readiness for cooperation with those countries and to expand and strengthen ties.

Today, the official welcoming ceremony of the President of Armenia took place in the Royal Reception Palace of Jordan. The anthems of Armenia and the Hashemite Kingdom of Jordan were performed by the military orchestra.

The welcoming ceremony was followed by a private conversation between the President of Armenia Armen Sarkissian and the King of Jordan, His Majesty Abdullah II Ibn Al Hussein, which was followed by an extended meeting, which was attended by the Prime Minister of Jordan Bisher Khasavneh, Minister of Foreign Affairs and Emigrants Ayman Safadi, Minister of Industry, Trade and Supplies Maha Ali and other officials.

Abdullah II Ibn Al-Hussein has great prestige in the Islamic world; he is a representative of the Hashemite royal dynasty, from the 41st generation of the Prophet Muhammad, and ascended the throne on February 7, 1999. Abdullah II is the custodian of the Christian-Islamic shrines in Jerusalem.

It was noted that Armenia is facing many challenges today, and as a good friend, they expect to work closely and provide support.

President Armen Sarkissian thanked for the warm hospitality, words of support and continued readiness to further develop relations between the two countries at all levels. He recalled the constructive discussions with the King of Jordan in Yerevan months ago and plans for the future. "There is mutual trust, and we can work for the future," said the President of Armenia. -"In difficult moments, it becomes clear who is your real friend." Noting that there is hope for a way out of any difficult situation, the President expressed confidence that the planned programs will be implemented and deeper cooperation will be established.

In a warm and friendly atmosphere, talking about the opportunities for the development of bilateral relations and the most effective use of the existing potential in various spheres, the President of Armenia and the King of Jordan expressed readiness to promote mutually beneficial cooperation. According to them, the two countries have a lot in common: they are the bearers of ancient civilizations; they perceive the importance and value of human resources. Jordan, like Armenia, has made human potential its main driver of development.

President of Armenia and the King of Jordan that Armenia and Jordan can successfully cooperate, particularly in the fields of the new technologies, education, science, health, food security, and tourism. Jordan's experience in working with IDPs can be instructive for Armenia.

They focused on the joint efforts in the fight against coronavirus, its health service and social-economic consequences, as well as regional and international issues of mutual concern, in particular, related to the Middle East peace efforts.

President Sarkissian informed the King of Jordan about the consequences of the Azeri-Turkish military aggression against Artsakh and the current situation in that context. The King of Jordan noted that his connections and prestige were used in the international arena to promote peace efforts.

The President of the Republic of Armenia Armen Sarkissian, who is in the Hashemite Kingdom of Jordan on a working visit, met with the representatives of the Armenian community of Jordan in Amman, the capital of Jordan.

The caring pastor of the Armenian community of Jordan, the Very Reverend Father Avetis Iprajian welcomed the visit of the President of Armenia, noting that the community follows the events taking place in the homeland and is well aware of the details of the Artsakh war. He informed that during those difficult days the Jordanian community also tried to support the compatriots of Armenia and Artsakh. "I wish success to all of us and to act wisely to overcome these difficult days of crisis; in the near future, we can have glorious victories the world will envy. We will be proud of these deeds, said the pastor. - Now we must act unitedly, shoulder to shoulder, holding hands and tolerating each other. The homeland is the greatest sanctity, and the defence of which is the duty of all Armenians. We must all fight for the security and prosperity of the homeland.”

President Armen Sarkissian thanked for the hospitality and support to the homeland during the difficult times. He spoke about the Azerbaijani-Turkish war unleashed against Artsakh, the situation in the country, the purpose of his visit to Jordan, as well as answered the questions of the community representatives.

The President of Armenia noted that there are numerous difficulties and problems. "The inglorious end of the war, the problems related to the current status of Artsakh, the fact that many Artsakhis have found their home in Armenia today, and God knows whether that is temporary or permanent. Thousands of young Armenians lost their lives, thousands of children lost their parents, thousands of young Armenians became injured, thousands of soldiers are returning home, and there are great economic difficulties at home that have deepened due to the coronavirus. These are realities, to which you cannot shut your eyes. "

Armen Sarkissian said that the best road to victory is the right assessment of one’s own values and opportunities.

The President emphasized that in these difficult days we find our friends anew. "Jordan is our friendly country. When I received an invitation from His Majesty to pay an official visit to Jordan during these difficult days, I gladly accepted it. This invitation testifies to the fact that at the most difficult moment for Armenia, Jordan extends a hand to our country, shows the whole world, first of all the Muslim world, that Armenia is not alone," said the President of Armenia. - “At the same time, he shows that this war does not exist and can never be considered a religious war. On the contrary, the leader of the Islamic world is one of the first to extend his hand to us. "

Speaking about the future plans, President Sarkissian particularly noted, "Even though we have lost today, I think our friends believe that we will be able to stand up and show that we cannot be defeated, because to lose a battle is one thing, but to stand up, finding strength after that and get ready for the next challenges of life is a necessity. We have a way to pass, and that way is difficult, but we can overcome it if we are all together, not divided into whites and blacks, government and opposition, etc. Let us stop cursing each other and pouring dirt on each other. We must work all together from morning to night, without stopping, If we are not going to work, we will curse each other, we will wait for someone to come and defend us… If you are not ready, even your closest friend will not defend you, because why should he defend you, if you do not want to defend yourself. National unity is very essential for that, and it is just a necessity at the moment."

Talking about the meetings held during the visit, the President of Armenia noted that the issues of deepening cooperation comprised the centre of attention. "This country has experience of working with people who have been deprived of their homes. This country also has a history of building a modern army. This country has a history of valuing culture and education. During the visit, we talked about cooperation in the fields of education, science, new technologies, and artificial intelligence. It should be clear to all of us that the next war will be with drones, governed by artificial intelligence. We must be ready for that war, and the path to reach it is to go through the following: education, university, science, natural sciences, and artificial intelligence, noted the President. - We also talked about a very important issue, such as food security. Armenia has a lot to offer. Our discussions were quite broad and fruitful."

During the meeting with the representatives of the Armenian community in Jordan, President Sarkissian also informed that King Abdullah II will support the completion of the St. Karapet Armenian Apostolic Church on the banks of the Jordan River, which stands at the baptismal site of Jesus Christ and symbolizes the Armenian-Jordanian friendship. They also talked with the King of Jordan about the protection of Armenian cultural and spiritual values.

Answering the questions of the representatives of the Armenian community, President Sarkissian referred to the ways-out of the situation in the country, considering important to implement the constitutional solution of the crisis. Speaking about his proposals to hold early parliamentary elections and form a government of national accord, the President stressed that the way to resolve the crisis in a parliamentary country has always been early elections. The idea of ​​forming a government of national accord is not new either. "In any such situation, when there are great difficulties, there is only one way to overcome them - unity, being together," said President Sarkissian. - My suggestion is that the government and the opposition should have a dialogue, and for this, they can come to the President. The institution of the President is for that, the President must be the person who will support the solution of the most vital and the most important problems for the country.”