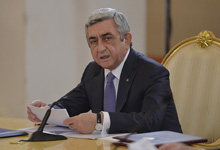 It’s been a very eventful day. The session of the CSTO Collective Security Council has concluded minutes ago.

Our meeting was conducted in a very complex situation conditioned by the proliferating threat of international terrorism which has been challenging the security of the international community, countries and regions.

Assessments and approaches on the most pressing issue of our day - fight against terrorism, are formulated in the Declaration on the Current Situation in the World, which has been adopted at the today’s session. CSTO member states stand for the creation of a coalition based on the provisions of the UN Charter, norms and principles of international law.

We have discussed the incident with the SU-24 Russian aircraft which participated in the antiterrorist actions in Syria and was shot down by the Turkish armed forces. I believe that this move by Turkey is not conducive to the consolidation of international efforts aimed at fighting terrorism, resolution of the situation in Syria, or reestablishment of peace in the region. In connection with this incident, we, as allies of Russia, express our solidarity and support to Moscow’s position.

We’ve had a very productive and candid conversation in a restricted format, reaffirmed our readiness to continue to reinforce power potential of the CSTO, to amplify its anti-terror component, to raise the combat readiness of its rapid response collective forces to be able to effectively counter new challenges and threats.

I have no doubt that our joint and combined efforts will allow to efficiently carry out all the mentioned programs. The process of implementation of these programs will be discussed at the forthcoming session of the Collective Security Council to be held in Yerevan in 2016.

Besides, we have made two staff related decisions – “On the Secretary General” and “On the rotation of the officials – members of the CSTO permanent bodies.”

It’s been unanimously decided to extend Secretary General Bordyuzha’s term in office until January 1, 2017. It’s been also decided to instruct the Council of Foreign Ministers and Council of Defense Ministers together with the Secretary General to prepare and present for approval to the Collective Security Council proposals on the distribution of positions based on quotas, as well as proposals on the distribution of positions based on quotas at the Joint Staff of the CSTO and corresponding structures. This is done in full compliance with the agreements on the necessity to conduct active rotation which were reached in Dushanbe. Nikolay Bordyuzha is leading the Secretariat quite successfully, he’s well aware of the legal base of the Organization which is an important prerequisite for the effective realization of this task.