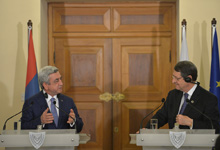 It is always a great honor and pleasure for me to be hosted in this brotherly land which has a millennia long history and cultural values of global importance. I am very grateful, Distinguished Mr. Anastasiades, to you and the authorities of Cyprus for this warm welcome.

Today we have had substantial discussions with President Anastasiades regarding our bilateral, as well as regional and international agenda. I should mention with satisfaction the fact that approaches of our countries on them fully coincide.
We stressed the importance of the recent high-level reciprocal visits, which have given a new impetus to the bilateral political dialogue, interparliamentary cooperation, to the cultural and educational ties. We renewed our pledge to keep the dynamics of our political dialogue and to work towards the diversification of the agenda of our cooperation. Towards that end, in the framework of this visit, we have signed a number of documents. In the framework of development of the Armenian-Cypriot cooperation we stressed especially the importance of the efficient cooperation established in the military area and its continuous expansion. Taking this opportunity, I once again expressed gratitude to the friendly people of Cyprus for reiterating last year – at the 100th anniversary of the Armenian Genocide – its solidarity and friendship with the Armenian nation. It was testified to by the visit of the highest leadership of Cyprus – President Anastasiades and President of the House of Representatives Omiarou to Yerevan on April 24, by the adoption by the Parliament of Cyprus of the resolution on the criminalization of that horrendous crime, and by the multiple events which took place in your country. We, of course, agreed that our bilateral trade and economic relations need a special boost. We discussed developments which open new opportunities for the expansion of bilateral economic relations, for the implementation of new initiatives. I mean the economic stabilization of Cyprus, Armenia’s membership to the EEU and deepening economic ties with the EU, new opportunities related to Iran and other favorable developments.
I certainly highly value the constructive and balanced position of Cyprus on the peaceful resolution of the NK issue which fully corresponds to the common position of the EU and fully supports the continuous efforts of the Co-Chairs of the OSCE Minsk Group. In turn, Armenia has been constantly speaking about the necessity of a fair resolution to the Cyprus problem, based on the reached agreements and according to the corresponding resolutions of the UN. I hope that there will no spoilers, and consistent efforts of President Anastasiades will soon yield results.
I stressed the importance of the continuous contribution by Cyprus to the development of the Armenia-EU relations, particularly in the context of the Eastern Partnership program. I am also thankful for the concern and support on this issue from the Cypriot delegates at the European Parliament.

It is well known that interstate relations of Armenia and Cyprus are anchored in the centuries-long warm relations, spiritual and cultural community of the representatives of our two ancient civilizations. I certainly stressed the importance of the necessity to further develop humanitarian ties through the organization of the days and events dedicated to the cultures of our two peoples. It is very symbolic for me that tomorrow I will take part at the ceremony of installing in the park near the Ministry of Foreign Affairs of Cyprus the copy of a cross-stone destroyed in Jugha. From the viewpoint of enriching each other’s cultures and development of our political relations, I certainly mentioned the input of the flourishing and creative Armenian community of Cyprus, which wouldn’t be the way it is now without the benevolent attitude of the people and leadership of Cyprus.

I am proud that the Armenian-Cypriot friendship is a genuine one, a strong one. We are united not only by the common history and culture but also by our vision to build future based on universal human values. I have no doubt that Armenia and Cyprus will continue to work together in the name of that future. Moreover so because my friend Nicos and I know each other for a long time and do know what’s to be done, and whatever we do, we do it to strengthen the friendship of our two nations.