A Joint Declaration of the Presidents of Armenia and the Czech Republic on the results of the meeting at the briefing with the representatives of the mass media. 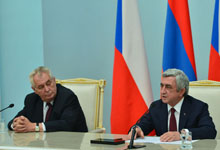 Today we are honored to welcome the President of friendly Czech Republic and my good counterpart Mr. Miloš Zeman for a state visit. This is the first visit of the president of the Czech Republic. Indeed, it will leave its footprint on the history of bilateral relations.

Today we had a fruitful discussion on a large range of bilateral, regional and international issues, like we had in Prague, during my state visit to the Czech Republic. We noted with satisfaction that we had matching viewpoints over those issues, creating an environment of mutual understanding and trust on the ways of deepening of our relations.

Only since 2014 over two dozens of high level visits have taken place. Following our last meeting the Embassy of the Czech Republic to the Republic of Armenia was established and the first resident ambassador was appointed. Inter-parliamentary relations, decentralized cooperation and collaboration in international fora have intensified. Within this context, undeniably, the continuous assistance of the Czech Republic to advance the Armenian-EU cooperation has a distinct place and we highly value it. As a result, the Czech Republic is one of our stable and reliable partners in Europe and our bilateral cooperation is at the highest level ever.

With President Zeman we thoroughly discussed bilateral economic cooperation which is one of our priorities. It is not in vein, that almost all high-level bilateral meetings are followed by business forums. Later today president Zeman and I will give a start to another business forum. Surely, we have positive developments in this field, yet there is a lot to achieve. In this respect, we discussed new opportunities derive both from Armenia’s membership to the EEU and reopening of the market in Iran, our traditional partner country. At the same time, attaching importance to the bilateral economic ties, we were unanimous with President Zeman that the pillar of our relations was not merely economic interest, rather it is the common values, having led our people through history up to the 21st century.

We highly value the position of the Czech Republic concerning the Nagorno-Karabakh conflict, which is in line with the general stance of the EU and is in full support of the efforts of the OSCE Minsk group co-chairs. I extended my special gratitude to Mr. President and the government of the Czech Republic for this attitude. We both attached importance to the implementation of the arrangements agreed upon in Vienna in May, including the agreements on the ceasefire from 1994 and 1995, establishing monitoring and incident investigation mechanisms and adding the capacities of the team of Personal Representative of the OSCE chairperson- in- office as an anchor for the long-lasting peace in the conflict zone. Unswerving implementation of these steps is the least to be done to pave way for the constructive and, which is more important, result-oriented negotiations.

Certainly, I also informed Mr. Zeman about the possibility of new meetings with the President of Azerbaijan mediated by the Minsk Group co-chairs. And I thanked him for his offer to use the capacities of Prague, Czech Republic for the meetings. In the meantime, I surely expressed my concerns over Ilham Aliyev’s recent unbalanced behavior, signs of which were apparently not visible in Vienna. Particularly with his speech at the “Fourth Conference of World Azerbaijanis”, where he was cynical about the Armenian state, made personal offenses against the President of the country, with whom by the way he is going to talk on certain issues, articulating thoughts that mock history, he shaped a clear perception about his inappropriateness.

I hope that this is a temporary problem; sort of machismo and it will disappear very soon as we have the commitment to get to serious work in the nearest future. Hopefully, this is not a conscious behavior intended to abort Vienna arrangements.

I expressed the satisfaction of the Armenian side about the unanimously adopted resolution on the Centennial of the Armenian Genocide by the Foreign Affairs Committee of the Czech Chamber of Deputies as well as unambiguous attitude of the Czech President on the matter. The historic resolution on recognizing the Armenian Genocide by the German Bundestag on these days comes to prove that the process of recognition is irreversible - falsifying history, denying facts and spouting intimidation cannot stop it.

I believe that our interstate relations will continue to successfully develop, since it is based on the unselfish friendship between Czech and Armenian people, mutual understanding and the strive to build a common future.

It is my pleasure to give the floor to my friend President Milos Zeman.