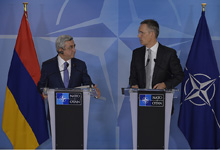 It’s a great honour for me to visit the NATO Headquarters again and meet with you to discuss the issues of mutual interest.

This year marks the 25th anniversary of Armenia’s cooperation with the North Atlantic Alliance. It was a quarter of a century ago, in 1992, when the newly-independent Armenia joined to the North Atlantic Cooperation Council, laying the foundation for establishing partnership relations with the NATO. And today I am glad to emphasize that during that quarter of a century our partnership has grown and has been completed with new content, thus becoming one of the components of Armenia’s multilayer security system.

The Armenia-NATO relations have a quite broad agenda based on clearly understood common interests and needs. It includes both political dialogue at the highest level and numerous examples of practical cooperation.

Together with the Secretary General we highlighted the importance to maintain the current level of political dialogue and continue regular contacts, and discussed issues related to the further development and expansion of our partnership with the NATO.

We acknowledged that four Armenia-NATO Individual Partnership Action Plans have been successfully implemented and currently the fifth plan for 2017-2019 is in the stage of approval. We emphasized the importance of the upcoming launch of the activities of the NATO Trust Fund in Armenia. And I invited Mr. Secretary General to visit Armenia, which will provide a very good opportunity to sum up what have been done over these 25 years and to outline our future activities.

Armenia continues its important contribution to the collective efforts aimed at establishing international peace and stability, thereby turning from a security consumer into a security provider. While facing serious security threats, Armenia makes its input to the security and stability in various parts of the world by realizing full well to which extend the world is interconnected today and that there are no longer security challenges of individual states. They challenge both the individual countries and everyone. I would like to commend that by developing its peacekeeping capacities as a result of the Armenia-NATO cooperation, during the recent years Armenia has extended the geography of its engagement. Along with our involvement in Kosovo and Afghanistan today our servicemen also participate in the missions in Lebanon and Mali being carried out under the aegis of the UN. I am glad to note that Armenia is assessed by the Alliance and its member states as an “active partner of the NATO”.

I am also proud that our servicemen are assessed as well prepared, disciplined and responsible participants of these missions. I am convinced that our servicemen will use the international experience and capacities acquired within the framework of peacekeeping missions for our army-building.

Indeed, we touched upon the most explosive security challenge of our region – the recent developments on the Nagorno-Karabakh issue. In this context I attached great importance to the support of the NATO and Mr. Stoltenberg personally to the mediation efforts of the OSCE Minsk Group Co-Chairs aimed at the peaceful settlement of the Nagorno-Karabakh conflict. I am thankful to you, Mr. Secretary General, for supporting us, I mean the OSCE Minsk Group Co-Chairs.

The April war, followed by continuous regular shootings with the use of heavy artillery and military equipment demonstrate that this conflict is an “active” one and today more than ever it is essential that the international community unite around a civilized settlement by supporting the efforts of the OSCE Minsk Group Co-Chairs countries towards the peaceful settlement. We noted that according to “Partnership for Peace” program’s framework document, “The protection and strengthening of fundamental freedoms and human rights, ensuring freedom and justice, and establishment of peace through democracy are key common values for the partnership”.

In conclusion, I would like to reaffirm the commitment of the Republic of Armenia to continue to set an active positive agenda with the North Atlantic Treaty Organization and its member states for the further consolidation of international peace and security. I also hope that my next meeting with the NATO leaders will take place in Yerevan.

Warm welcome to NATO Headquarters. It’s a pleasure to meet you again. We last met at NATO Summit in Warsaw in July last year.

We have developed our partnership over many years; in fact, this year is the 25th anniversary of you joining the North Atlantic Cooperation Council. It was a crucial time following the end of the Cold War. It proved to be the foundation of our partnership and we have built on that partnership over many years. You attended the Warsaw Summit because of your country’s important contribution to NATO’s Resolute Support Mission in Afghanistan. Thank you very much for Armenia’s presence and contributions to NATO’s military presence in Afghanistan fighting terrorism.

Armenia also contributes forces to our KFOR peacekeeping mission in Kosovo, helping keep the Western Balkans stable. Armenian troops are helping to bring stability to those countries and we are very grateful for your contributions, helping to make EuroAtlantic area safer and more secure.

The NATO Alliance is committed to working with you, as well as other partners, because cooperation between NATO and Armenia is in both our interest. Together, we are developing a new, individual Partnership Action Plan, tailored to your needs and requirements and I see opportunities for us to cooperate more closely on interoperability, defense reform and defense education. NATO and our Allies have considerable expertise in defense and security sector reforms. Armenia can draw upon these resources.

I also want to congratulate you on your participation in the Building Integrity program to counter corruption in the armed forces and your progress on implementing the UN Security Council Resolution 1325 on women peace and security. These are important steps for all of us.

We also discussed the Nagorno-Karabakh conflict. I am concerned about the continuing violence along the line of contact, including this weekend. It is important to avoid escalation, because there is no military solution to this conflict and its persistence is holding back the region. So we encourage both Armenia and Azerbaijan to return to the negotiating table and to work towards a peaceful resolution to the Nagorno-Karabakh conflict. NATO fully supports the Minsk Group process to that end.

So thank you once again, for coming here today and thank you so much for our close partnership, which, I think, is good for Armenia and good for NATO.

Thank you so much!

Abraham Gasparyan, Armenian Public TV - Thank you Mr. Secretary General, Armenian Public TV. It looks like recently NATO’s advertence towards the Partnership has somewhat reduced; there are fewer meetings and events with the partner states. There is a view that NATO has identified its partners and now is deepening the relations only with so the called Enhanced Opportunities Partners. If I am not mistaken, the partner states are not even invited to the upcoming summit. How would you comment on this? Does it mean that NATO is changing its approach towards its partners?
Thank you.

Secretary General - For NATO partnerships are very important and that’s exactly why we are strengthening the partnership with Armenia and we have under process of agreeing a new individual partnership program with Armenia, and I think that provides the best possible context on foundation for more partnership activities for NATO and Armenia to implement together. First of all, I would like to thank Armenia for contributing to many different NATO operations and missions, contributing to NATO’s presence in Afghanistan fighting terrorism, and contributing to NATO’s presence in Kosovo helping to stabilize the Western Balkans and also the fact that NATO has been helping Armenia in different ways implementing reforms to modernize its defense institutions and defense education. And we also were together on the program we called Building Integrity which is about how to fight corruption within the armed forces and train its forces by participating in NATO exercises. So just the fact that Armenian soldiers, troops are participating in NATO exercises increases the interoperability, the ability to work together in military operations and we share knowledge, we learn from each other and I think it increases the quality of our soldiers both Armenia and in NATO. And we also work together in civil military activities like the civil emergency response, exercise, which Armenia participate in last year. So there are many different activities, where we work together and we looking into it what we can do. The summit in Warsaw, Armenia was present there in July, the meeting we are going to have with heads of states and governments in May is not a summit, that’s a special meeting, we should have very brief meeting and the main purpose of that meeting will be to have the new US president come to reseat NATO. So we will not have any partner, not enhanced opportunity partners or any partners participating in that meeting, but Armenia is invited to different NATO activities and it participated in our last ordinary summit in Warsaw.

Shake Ghazaryan (Armenia TV) – Mr. President, this question is for you. You’ve referred to the Armenia-NATO relations and a very substantial agenda therein. Could you please tell us to what extant it is compatible with Armenia’s membership to other security structures and commitments assumed there? Thank you.

Serzh Sargsyan - As time and practice have shown, these dimensions are fully compatible. There are multiple players in our region, and we are striving in each case to find a cooperation possibility for the benefit of our security. Over the last 25 years, Armenia has never endeavored to envisage or take advantage of the encounters among these players. In our opinion, it would be a disastrous policy, and in our region we have seen that this can be absolutely true.

Of course, the CSTO and NATO pursue different objectives, but I repeat that our experiences prove that it is possible for a country, which is striving to provide for its own security, to find areas of cooperation in different formats.

By the way, I would like to note that when we were negotiating with the EU and our membership to the Eurasian Economic Union came up, and the EU had some reservations with this regard, we referred to NATO, pointing that though a founding member of the CSTO, we have been cooperating with NATO for 25 years and it’s been quite all right. Thus, I believe that our example might be instructive for others, and we will carry on with this policy.

Thank you very much.