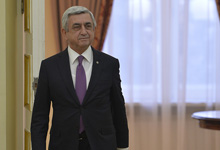 President Serzh Sargsyan’s article in Izvestia newspaper on the social and economic development of the country and international cooperation.

In the 25th year of its independence the Third Republic of Armenia has reached a unique milestone endowed with a precise, valuable experience of statebuilding, achievements and failures, but with a steady glance directed into the future.
This road was not easy. Despite the difficulties in overcoming consequences of the earthquake of 1988, despite the war imposed on us, despite the influx of refugees into Armenia, the blockade, severed economic ties with the outer world, energy crisis and other problems, Armenia undertook precise steps aimed at the reestablishment of her independence. This quest has united almost 10 million of our compatriots all over the world, our desire to see a secure, democratic, and prosperous Armenia.
Under the threat of a physical extinction of the people of Nagorno Karabakh, in the existence of territorial claims against Armenia, we have concentrated our entire attention on the defense capabilities of the country.

Not surprisingly the Army has become one of our most successful institutions. For a long time now, it has been considered the most powerful and combat ready Army in the region. Today, 25 years after its creation, the Armed Forces of Armenia continue to develop, strengthening their operative abilities, equipped with the modern weaponry, developing comprehensively their governance system, under the democratic civilian control and through the international military and political cooperation.

Armenia is increasing and strengthening steadfastly her defense abilities, including in the framework of the military and technical cooperation with her strategic partner Russia. We have created a Joint Military Group and a joint air-defense system. Russian 102 military base in located on the territory of Armenia.
In the framework of the Armenian-Russian military and technical cooperation, the visit of the Russian President Vladimir Putin to the Russian military base in Gyumri in 2013 was a momentous event. At the base, reviewed were issues related to the military and technical modernization of the base and enhanced efficiency of the military service. It is obvious that to address these issues, it is necessary to conduct interested discussions between the Armenian and Russian sides on the idea of the creation in Gyumri of a military industrial joint complex. At the same time, the scope of the multifaceted compound should be viewed as along with solving the modernization problem of the 102nd military base capable of becoming a platform for the military cooperation with the countries bordering Armenia and Russia, which is a possibility for accessing Russia’s traditional weapon markets. Creation of jobs in Gyumri will become a factor in the improvement of the social and economic situation in the city.

All this is aimed at ensuring the security and stable democratic development of the country, considering the necessity to uphold peace and stability in our volatile region where unresolved armed conflicts still exist.

As the guarantor of the security of the NK people, Armenia, in the framework of the OSCE Minsk Group, continues to persistently and constructively search for the peaceful means for the resolution of the conflict.

Azerbaijan’s new aggression against Nagorno Karabakh in April 2016 considerably undermined the peace process and efforts aimed at the reestablishment of confidence between the parties. Escalation of the situation on the contact line on February 24-25, 2017 proved once again that the issue of revealing the party which is responsible for the violation of ceasefire remains a pressing issue and underscored the expediency of the agreement reached in 2016 in Vienna and Saint Petersburg on the introduction of the mechanism for the investigation of the ceasefire violation incidents and its speedy implementation aimed at the cessation of hostilities.

Unlike other conflicts, in the resolution of the Karabakh conflict Russia, the US and France have a continuous consensus which allows to view the Chairmanship of the OSCE Minsk Group as an efficient platform for a constructive dialogues among these countries.

Baku needs to finally understand that Armenia and the Co-Chair countries speak the same language. In the civilized world there is no alternative to negotiations. War is not an option for solving the problem; peace will be achieved only through a dialogue and not ultimatums. We stand on the premise that the right of people to master their own destiny is an indivisible part of the contemporary world. And the NK conflict will be solved based solely on that premise. In addition, it is necessary to pay attention to the opinion of the international expert community which believes that Artsakh is consistently building a democratic state system.

Despite the fact that the Karabakh conflict remains unresolved and correlated objective difficulties and unfavorable international economic situation, we have been able to create necessary stable macroeconomic conditions for the country’s development. This has been highly praised also by our partners. Armenia has been recognized by the reputable international agencies one of the most liberal countries for conducting business. The improvement of the investment and job atmosphere in our country is one of our priorities. With regard to making investments, among competitive advantages of Armenia is the fact that we have a preferential trade regime with many countries, free trade agreements with almost all CIS countries. Armenia has General System of Preferences – GSP with the US, Canada, Switzerland, Japan and Norway, and GSP+ regime with the EU countries.
After our accession to the Eurasian Economic Union our economic and trade opportunities have expanded considerably due to the fact that the 180 million strong market of the EAEU countries was opened for us. The Union provides opportunities for free movement of goods, services, capital, and labor. This is, undoubtedly, a great advantage. Russia, which is one of Armenia’s important trade and economic partners, is also the main investor in different areas of our economy – industry, transport, mining, and telecommunications.

This year we celebrate the 25th anniversary of the establishment of diplomatic relations with Russia and the 20th anniversary of the Treaty on Friendship, Cooperation and Mutual Assistance. But we will not stop there. There is no doubt that potential of our cooperation is much larger. This fact motivated the governments of our countries to search for new investment opportunities to expand the mutually beneficial economic cooperation.

After the constitutional referendum of 2015 Armenia is facing fundamental political reforms which are aimed at the establishment of a full-fledged parliamentary system of governance. Strengthening of democratic institutions, development of the open civil society, establishment of a transparent and efficient system of governance are the strategic directions for our country’s advancement. The main task before the leadership of Armenia is to provide for security and to create conditions for the sustainable democratic development.