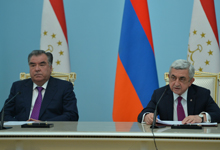 In the beginning of my statement, I would like to note that the talks were held in a friendly and absolutely constructive atmosphere. I am sincerely glad to welcome the President of Tajikistan in Yerevan in the year of the 25th anniversary of diplomatic relations and the 15th anniversary of the signing of the Friendship and Cooperation Agreement between our countries.

Talking about these jubilee dates, we should also remember that the history of Armenian-Tajik relationship has been around for many centuries; they have always been open, trustful and filled with mutual respect.

At today’s meeting we examined in all detail the current state of bilateral cooperation, discussed the development prospects and outlined the prospective areas and the specific tasks of our joint efforts. We highly appreciate the positive trends of sustained development in Armenian-Tajik relations as witnessed over the past few years. We agreed to be consistent in the furtherance of bilateral cooperation and take the necessary steps to bring them up to a new qualitative level.

All this was reflected in our Joint Statement, as well as in the impressive package of documents regulating interaction in the most important areas of cooperation, including telecommunications, air communication, healthcare, education and other areas.

We set a specific task, namely to give a clear indication of what should bilateral cooperation be like in the foreseeable future. This will be facilitated by the political dialogue between Yerevan and Dushanbe, which we intend to intensify.

It goes without saying that during the talks we discussed a wide range of regional and topical international issues. We are closely cooperating within the framework of international organizations. In this context, I would single out our interaction in the frame of the Commonwealth of Independent States and other multilateral formats and, of course, within the framework of the Collective Security Treaty Organization, the chairmanship of which we took over from our Tajik partners last year.

Consultations are conducted between the ministries of foreign affairs. Our countries’ missions and representations are keeping in close touch during work in international organizations. Just as before, both sides are prepared to strengthen mutual support on the most important issues concerning the key national interests of each other.

In the course of today’s negotiations, I reaffirmed once again Armenia’s position as to exclusively peaceful settlement of the Nagorno-Karabakh conflict on the basis of the norms and principles of international law, the provisions of the UN Charter, in particular, equally relating to the principles of non-use of force or threat of force, territorial integrity, equality and the right of peoples to self-determination.

We stressed the importance of implementing the agreements aimed at preventing the escalation of the situation in the conflict zone, stabilizing the situation and creating conditions for the advancement of the peace process. I once again focused on the need to broadly support the efforts of the OSCE Minsk Group co-chair countries as the only format that the international community has been given in the mediation mandate.

Indeed, another key focus was the agenda of practical steps aimed at boosting trade and economic cooperation, which, in our view, should be stepped up mediating joint production facilities with an emphasis on innovations and high technologies.

We agreed to give additional instructions to our governments in terms of making use of all available mechanisms for optimizing the structure and improving the quality of trade and economic cooperation.

It is gratifying that after a long break, the Armenian-Tajik intergovernmental commission on trade and economic cooperation resumed its activities. We believe that the transfer of the commission’s co-chairmanship to the ministerial level will confirm the relevance of our decision, and that the commission itself will effectively promote the entire range of economic ties, promote their diversification and initiate new mutually beneficial projects. Also, we believe that this important role should be assigned directly to the business communities of our countries, whose representatives are meeting today in the framework of the Armenian-Tajik business forum.

In the context of exchanges in the field of economy, tourism and expansion of contacts between the citizens of our countries, we touched upon the possibility of launching direct air flights between our countries. As part of this project, we are ready to provide our Tajik friends with a set of preferences available under Armenia’s policy of “open skies.”

Today, both sides reaffirmed their readiness for further expansion of cooperation in the fields of education, culture and science. This implies cooperation between the academies of sciences, the schools of Oriental Studies, observatories, universities and research institutions.

Armenian-Tajik relations have reached a new historical stage today. Together with the Tajik side, we are prepared to continue endeavoring towards consistent, sustained and mutually beneficial development of our partnership in the long run.

In conclusion, I would like to once again thank the President of Tajikistan for meaningful and fruitful negotiations. I am convinced, Mr. President, that your visit will build on the existing ties of sincere friendship between our peoples and countries. Thank you.

First of all, I would like to express my gratitude to Honorable Serzh Azati Sargsyan, the Government and the people of the friendly Republic of Armenia for a warm welcome and hospitality.

It is symbolic that my official visit takes place in the year of the 25th anniversary of establishment of diplomatic relations between the two countries. From this point of view, we see the visit and its results as a continuation of the course aimed at strengthening Tajik-Armenian interstate relations, which have been developing consistently during the years of independence.

Today’s meetings are viewed as a new round of a permanent political dialogue between the two countries, including at the highest level. During the talks, we considered a wide range of issues of bilateral cooperation. We spoke in favor of further development of mutually beneficial Tajik-Armenian relations in trade, as well as in the economic, scientific, technical, cultural, humanitarian and other spheres of mutual interest. We concurred in that cooperation in these areas still falls short of the potential that exists in our countries.

With reference to key areas of trade and economic cooperation, we stressed the importance of wider cooperation between business entities and the private sectors of the two countries. We decided to make a better use of existing opportunities in order to achieve a tangible increase in trade turnover and implement joint projects.

Willingness was expressed as to the strengthening of the practical component of our interaction in the real sector of the economy. We called on Armenian companies to use their investment opportunities and new technologies in order to participate in our projects that are attractive from the point of view of economic benefits. We have developed such projects and programs in the energy sector, tourism, mining, light, food and processing industries, transport and communication infrastructure, and healthcare. We are ready to create favorable conditions for this. The parties agreed to cooperate more actively in the framework of the standing intergovernmental commission on economic cooperation.

During today’s meetings and negotiations, we revealed good opportunities for close cooperation in the cultural and humanitarian areas. The need for developing bilateral ties in the field of research and engineering, in science, education and culture was stressed on either side.

Both sides acknowledged the importance of signing a new package of agreements based on the outcome of the talks, meant to strengthen the legal framework of bilateral relations in specific areas of cooperation.

We exchanged views on a number of topical issues on the international agenda. Our focus was to further strengthen regional stability and security. In this regard, we reviewed the current status and the prospects of our interaction within the UN, OSCE, CIS, CSTO frameworks and other multilateral associations.

The parties reaffirmed their readiness to strengthen cooperation in the field of combating global threats - terrorism, extremism, drug trafficking and other types of organized crime.

In discussing regional issues, we shared our vision of the problems of Afghanistan, expressed a common concern regarding the deterioration of the processes taking place in individual countries and regions.

Proceeding from our peacekeeping experience, we express our firm commitment to the principles of peaceful resolution of existing contradictions and conflicts in accordance with the universally recognized international norms and standards. In our opinion, negotiations are the most constructive way to solving such a complex problem as the Nagorno-Karabakh conflict.

In conclusion, I would like to emphasize our satisfaction with the outcome of the talks, which went out in an atmosphere of friendship, constructiveness and mutual understanding. I am sure that the results of today’s official meetings will open up new horizons for strengthening and developing cooperation between our nations to the benefit of our peoples.

I invited my distinguished counterpart Serzh Azati to pay an official visit to the Republic of Tajikistan. I hope that the continuation of our dialogue in Dushanbe will boost the ongoing positive interaction between the two countries. Thank you.