President Serzh Sargsyan, President Michel Aoun of the Republic of Lebanon summarize their talks at a meeting with mass media representatives 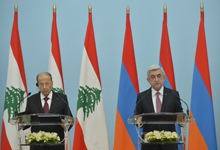 I once again warmly welcome the President of the Republic of Lebanon, General Michel Aoun, and the members of his delegation. Mr. President, this is your first visit to our country which is sure to give fresh impetus to our friendship based on deeply rooted historic ties.

I am pleased that the talks with President Aoun went off in a warm atmosphere in tune with the spirit of Armenian-Lebanese friendship. We had a substantive discussion on the entire agenda of bilateral cooperation. We reaffirmed our countries’ determination to deepen and further strengthen our multifaceted cooperation on the basis of mutual trust.

Our diplomatic relations ushered in the quarter of century last year, but our peoples’ friendship has a centuries-old history, which is by far promoted by the Armenian community of Lebanon.

We pointed out that during these years we succeeded to give our friendship a new quality, forming strong ties of cooperation in political, trade-economic, cultural, scientific and other spheres.

We highlighted the high level of political dialogue between our countries as an important stimulus for mutually beneficial cooperation in all spheres.

We emphasized the importance of inter-parliamentary relations especially considering that in April Armenia will switch over to a full parliamentary system of governance. In terms of bilateral relations, we attach great importance to the economic component.

We value the continuous expansion of Lebanese investments in Armenia. Lebanon’s presence in Armenia is evident in the banking sector, services, agriculture and many other areas. We are eager to build on these achievements.

We agreed to work together to increase bilateral trade turnover. We boast a legal framework which covers almost the whole complex of economic relations and builds confidence between our businessmen.

There are about fifty documents signed between our countries which provide a solid basis for effective cooperation in various fields.

We highly assessed the effective cooperation and mutual assistance of our countries within the international structures, especially as regards the issues of vital importance to both of us. We agreed to continue with the same spirit in a bid to deepen our multilateral cooperation.

I briefed the Lebanese President on the latest developments in the Nagorno-Karabakh peace process. Our shared conviction is that there can be no such a resolution as will in any way undermine the right of the people of Artsakh to live freely and securely in their historical homeland. In this regard, we agreed that any settlement should be based on Artsakh people’s right to live in its historic homeland.

I must say that we also agreed that the most important point in the Jerusalem issue is the negotiation process since such problems cannot be solved through the use of force.

More than 100 years have passed since the Armenian Genocide, but there are historical events and a sense of gratitude that have no time restrictions. I once again thank the people and the authorities of Lebanon for giving refuge, accommodating and providing an opportunity to work and create for Armenian refugees in that crucial part of our history. We are grateful that Lebanon is on our side in the effort to condemn and prevent the crime of genocide.

Unfortunately, we continue to witness crimes against humanity in the Middle East, particularly in Syria. In this regard, we attach importance to Lebanon’s practical and effective investment in combating terrorism and radicalism, and highly appreciate the humanitarian assistance provided to the Syrian people during these years. Armenia, too, continues supporting our Syrian sisters and brothers within the bounds of its modest opportunities.

I am proud that Armenia has been able to make its modest contribution to the stability and security of friendly Lebanon with the participation of Armenian peacekeepers in the UN UNIFIL mission in the south of the country.

We agreed with the President of Lebanon to continue active Armenian-Lebanese contacts in the same spirit and promote cooperation in all spheres of mutual interest. And I am glad that Mr. President accepted our invitation to be back to Armenia this autumn and take part in the Francophone Summit.

Mr. President, I am gratefully giving you the floor.

We held positive and constructive talks with His Excellency President Serzh Sargsyan. We touched upon the recent developments in bilateral relations, the ongoing efforts and the tangible progress achieved so far.

Our meeting went off in a warm atmosphere of friendship, which reflects the strong human ties that bind us together, the specific relationship between the Armenian and Lebanese peoples, and the availability of numerous Lebanese citizens with Armenian roots. Many of them are with me today, including Lebanese government ministers and MPs. I called President Sargsyan’s attention to the fact that the Lebanese Armenians are held in deep respect in our society for their vitality, culture, civilization, social and political influence on our country’s political and economic life.

We also discussed the situation in the Middle East, the ongoing crises and wars in the region, especially in our neighboring Syria.

We agreed on the need to find lasting solutions to these crises and stop the war machine, as violence cannot but trigger violence and extremism as evidenced by the last seven years’ agitations and turbulences in our region.

I presented to President Sargsyan the challenges facing Lebanon due to the Syrian war. In particular, I called attention to the penetration of terrorist threats into our country, the region as a whole, and other countries of the world. Here, I assured him that Lebanon has successfully defied these challenges by destroying the terrorist cells and establishing peace and stability in the country.

We agreed on the need to abide by the culture of progress, respect for the rights of individuals and nations on the way to building bilateral and international cooperation in the fight against terrorism, since no country is safe from its implications.

We also talked about the problem of Syrian immigrants, which is more complicated in the neighboring countries, especially in Lebanon. I told my counterpart that our country has been subjected to economic, social, and security pressures resulting in more than one and a half million immigrants along with insufficient international assistance to meet their needs. In this connection, we emphasized that it is necessary to work toward achieving an international consensus that will ensure the return of Syrian refugees to their country under the control of the Syrian government.

I expressed gratitude to President Sargsyan for standing by Lebanon in the international arena, and assured him in turn that Lebanon will support Armenia in protecting its people’s legitimate rights, sovereignty, peace and prosperity.

I would like to note that during today’s talks we touched upon the Israeli threats to Lebanon, which affect our oil entitlements within the exclusive economic zone, the construction of a dividing wall that goes as far as the disputed points near our southern border.

I confirmed that Lebanon has been able to safeguard its inland and maritime borders through all legal means. In this matter, we rely on our friends from the international family and look forward to having their backing in countering these threats and de-escalating the situation.

I also thanked the President for the invitation to attend the Francophone Summit to be held in Yerevan this October. I promised to respond to the invitation, wishing the Summit successful proceedings.