Armenian people will not allow to violate rights of the people of Nagorno Karabakh, we will never allow another genocide in our Fatherland 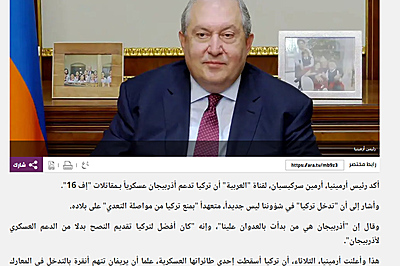 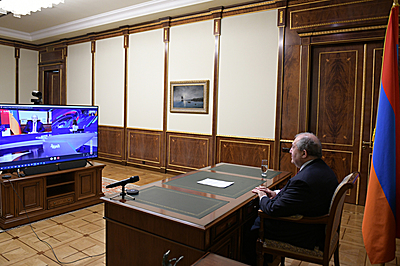 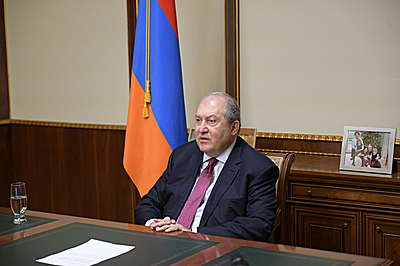 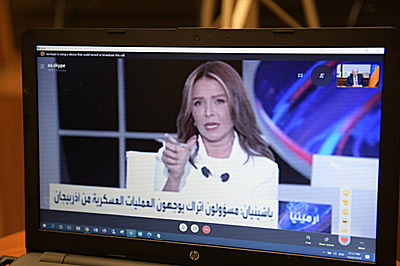 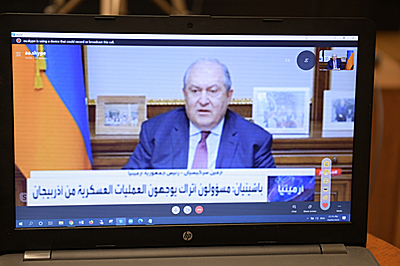 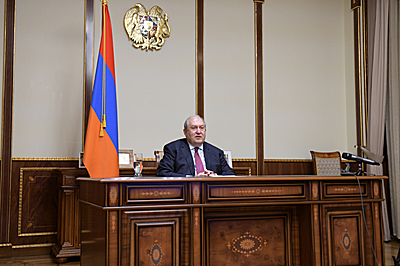 Question: Mr. President, thank you for your time. How would you comment on Turkey's statements in which it says it would support Azerbaijan to "return the  occupied territories?" What is your reaction to that?

Coming back to your question, I think I would like to have 2-3 points made here.

First of all, when Azerbaijan is speaking about “occupied territories”, they are speaking about the Republic of Nagorno-Karabakh. This is an area of historic Armenia where Armenians were living for centuries and thousands of years.

It is only less than 70 years that the Soviet leader Joseph Stalin gave that land to Azerbaijan, and it became a part of Soviet Azerbaijan. Then, with the end of the Soviet Union, people of that Soviet Republic of Nagorno-Karabakh with about 90 percent of Armenians always living there, declared their right to live freely in their own country and decide their own fate. Therefore, this is not an “occupied territory.” This is the Republic of Nagorno-Karabakh or the Republic of Artsakh for centuries and thousands years being inhabited by Armenians and what they were fighting for was for their independence and their human right of being, living freely.

As for the presence of the Turkish army in Azerbaijan, these are not just some rumors. Turkey can support Azerbaijan as much as they like and from the humanitarian perspective, I would be love to see how countries support one another in areas of education, science, technology, health, and other. However, when the Turkish army generals are present in Azerbaijan, when mercenaries from Syria hired by the Turkish side are fighting on the side of Azerbaijan, when Azerbaijan is using a wide spectrum of armament provided by and fabricated in Turkey and when the F-16 Turkish fighters are flying all over the border of Armenia and over Nagorno-Karabakh trying even to shoot the territory of the Republic of Armenia, I think there is no excuse for that. This is a clear interference in the life of people and their determination to live freely in Nagorno-Karabakh, and I think helping, supporting Azerbaijan in this case means helping Azerbaijan be involved in bloodshed instead of advising Azerbaijan and also talking to Armenia to restart negotiations.

In fact, we have for 26 years a wonderful platform which is created by the OSCE, and it is led by the Minsk Group Co-Chairs: Russia, France and the USA, and I do believe that there is only one way of resolving this issue by negotiations. There is no way that Armenians in Nagorno-Karabakh will be defeated, there is no way the whole Armenian nation - both in Artsakh or Nagorno-Karabakh, in Armenia, and worldwide Armenian communities will accept that, especially with the involvement of Turkey. We all remember how 105 years ago at the end of the Ottoman Empire one and half million Armenians were slaughtered, and the Genocide of Armenians happened. So there is no way we will allow this to happen again.

Question: Mr. President, I would like to list a number of points that you might want to address. First of all, Azerbaijan says that Armenia has started the clashes. Azerbaijan is also accusing you of having the support of the Kurdistan Workers' Party (PKK). If Turkey has Syrian mercenaries, then that country says that there are PKK mercenaries in Nagorno- Karabakh. You have mentioned that Turkey should advise Azerbaijan. Do you accept that this country can be a mediator, are you ready to hold some negotiations directly with Turkey?

-Well, what I was saying is that it would have been better if Turkey would give advice instead of becoming involved in the war and sending their military, generals, mercenaries, their fighters, their airplanes to Nagorno-Karabakh. But they are doing absolutely the opposite. So, how can they be mediators here? I don’t see how they can become a mediator here. Now Turkey can invent or pretend that there are issues with Armenia. This is an absolute nonsense that there are PKK fighters in Armenia. An absolute nonsense! They are also saying that Armenians are targeting the international oil and gas pipeline in Azerbaijan, again a nonsense! And let me just ask you from the point of view of pure logic. If Armenians had the intention of hitting a pipeline that runs from Baku to Ceyhan, why they didn’t do that 20 years ago when this pipeline was in the process of being built and with one or two shots this pipeline would never be there. By shooting 20 years ago, it would stop Azerbaijan selling via Turkey to the international community billions of billions dollars of oil and becoming rich and using that money, billions of dollars and making their military stronger and buying arms from worldwide and now shooting at Armenians. So where is the logic?
If we were a country that was ready to shoot at the pipeline, we would have been done it 20 years ago. So Turkey can pretend or declare there are PKK fighters, and that Armenians want to hit the pipeline. These are all excuses to have their strong presence in Azerbaijan, and I think that strong presence of the Turkish military in Azerbaijan is another increasing threat to Armenia.

Question: Why do you think that Turkey is doing all that? How are the events unfolding? Will we see more negotiations in the near future and is that possible that there will be a certain solution, observers, or will there be more military confrontations?

-First of all, let me tell that the military activity and the attacks were started by Azerbaijan. Armenians in Nagorno-Karabakh don’t have any reason to attack Azerbaijan. No way!

They are living in their independent republic and they are trying to build a normal human life. Why on earth they would attack Azerbaijan and provoke this sort of a bloodshed. The attack was organized by Azerbaijan because somehow they are under the illusion that they can resolve the issue with a military force. And I am saying this is an illusion because I can confirm there is no way that the Armenian nation will allow to happen another genocide. Every Armenian will become a soldier and they will help Armenians of Nagorno-Karabakh to defend their homeland. There is no other way but to go to the table of negotiations. But before that your message is more for the President Azerbaijan Mr. Aliyev.

I think he has started this phase of confrontation and basically he has to stop it. They are protecting the people of Nagorno-Karabakh, and it’s up to the Azeri’s side to decide, understand, and agree that there is no military solution to this conflict. There is only a human solution, which are negotiations. And we don’t have to go and try to find a negotiating party and a mediator because the organization is already there. It is the OSCE with three co-chairs. I mean these are co-chairs that everybody could trust. It is the United States, France and Russia. The way forward to peace is going back to negotiations, rather than destroying human lives, and they are destroyed on both sides, on the Armenian side and on the Azeri side. And I think you can invent any sort of imaginary reason why you are doing this- because there is PKK, and that is why the Turkish army is in Azerbaijan or they are protecting the pipeline, or because they are ethnically the same, they are ethnic roots and so one. But none of these gives you a ground to go on the other side and fight the independent Republic of Nagorno-Karabakh and also shoot at the Republic of Armenia. Let Turkey remember that they are still a member of NATO-an organization, which has a completely different defense policy than what Turkey is exercising today.

Question: Yes, that is true, Mr. President: Turkey is a NATO member. What do you expect from NATO? What can the international community do? Do you think that the Minsk Group can take effective steps? To date, we have not seen an appropriate solution by the Minsk Group or NATO.

I think we- as the Republic of Armenia, are standing to protect and defend the human rights of those who are living in Nagorno-Karabakh, the Armenians in the Republic of Nagorno-Karabakh. We are appealing to the world international community and to everybody. And when I say everybody, I do mean everybody, and we are not like the Turkish side saying that we will appeal to those who are ethnically close to us or religiously close to us. We live in a global environment and we have to respect each other’s faith, each other’s religion, and each other ethnicity and not getting ourselves isolated or polarized on this or that subject. I think that’s why we are appealing to all international communities, starting from the United Nations, to our friends in the Arabic world, to our friends in the Islamic world, to our friends in Europe, to our friends in Asia, Africa and the USA. They have to exercise an international pressure on Azerbaijan because they are the ones that have started this bloodshed. They have to exercise a pressure on Azerbaijan to stop the bloodshed. We are speaking also to the Minsk Group Co-Chairs. The Government of the Republic of Armenia, the Prime Minister and the Foreign Minister are in charge of running these negotiations and they have been in touch with the leaders of those three countries, the Co-Chairs of the Minsk Group, and we hope that the international community, the OSCE, and the Minsk Group Co-Chairs will eventually exercise their right of putting pressure on the Azeri and Turkish sides (because now Turkey is openly supporting Azerbaijan or fighting with Azerbaijan) to stop this and return people back to the table of negotiations. I can assure you again, there is no way that the Armenian people will allow that the rights of the people of Nagorno-Karabakh be destroyed. We will never allow another genocide on our land. I will basically appeal to everybody-including the Azeri side and the Turkish side to stop this bloodshed, and let’s return back to the table of negotiations.