If we allow the Azerbaijani side to carry out ethnic cleansing, we will see the repetition of what happened in Ottoman Empire in 1915 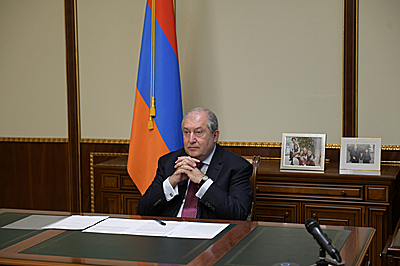 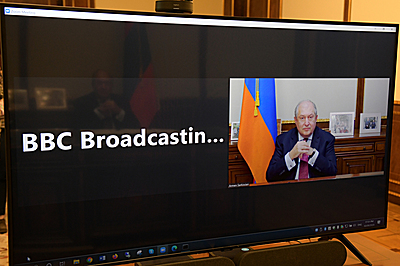 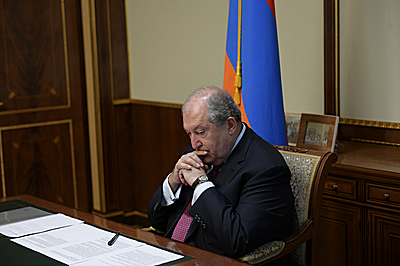 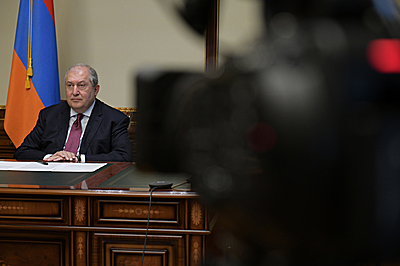 Question: Okay, Mr. President, if you're ready, I will start with my first question now. So we will primarily be talking about the escalation between Armenia and Azerbaijan. Is, is this what you would classify as a full scale war? Would you say?

Answer: Well, I don't know what's your definition of a full scale war. But Azerbaijan on the 27th of September had early in the morning on Sunday, has started on the whole line of between. Republic of Nagorno-Karabakh and Azerbaijan has started shelling and bombarding the whole border, but not only the border that inside the villages, the schools and so on. So there are a huge number of civilians that injured and, and we have from grandparents up to small children. So things are destroyed casualties every day in dozens and dozens and dozens, but then I'll leave that to you to judge is this full scale war or not. And it's not that Armenian side has started it. And the Armenian side in this case is not the Republic of Armenia. It is the Republic of Nagorno-Karabakh or Artsakh. A small place with 150,000 Armenians living there for centuries and thousands of years, were forced to be a part of Soviet Azerbaijan by Joseph Stalin. And then with the breakdown of Soviet Union people decided that they are, they're the masters of their faith and since in Nagorno Karabakh more than 90% of population were Armenians, they had a referendum and decided that they were living as an independent state. And on the other side is Azerbaijan, a state with a lot of finances and power and a friend like Turkey and 10 million population. And what they are trying to do is to force Armenians out of that of the land that they historically lived, even before the Azerbaijan as a republic existed. So, in my vocabulary it is called ethnic cleansing. So forcing people out because they don't belong to your ethnicity, they don't belong to your this or that qualification. So is it full scale war or not? I mean, for me it is. And it's a bloody war. And it's a war of a giant against tiny people, but very proud people, people that have proven some 26 years ago, they can fight and they will never be defeated. And they won the war then against Azerbaijan. And I don't know why, well, I can think of why Azerbaijan instead of negotiating and using the table of international negotiators, which is the table of OSCE in Minsk Group with the three co-chairs have decided to sort out the issue for them to do the ethnic cleansing of Armenian people of Nagorno Karabakh by force.

Question: How do you regard the role of the OSCE in Minsk Group, Mr. President?

Answer: Well, OSCE Minsk Group the last 26 years after the ceasefire in 1994, had a tremendous and very important role. First of all, it's a very highly respected international organization, and the clear defined mandate, and with the three top class cultures, which is Russia, which is United States, which is France, and then we're the ones that working hard with the both sides in order to, to bring this to final, I mean, diplomatic solution or a political solution rather than war. So I consider their work very highly, of course, any negotiations in this world, be that political, military or business, you cannot design them that they always go up, sometimes everything is nice and you finally reach what you have to reach. But ook at what's happening around the world. So there were ups and downs in this negotiations, but you cannot, you cannot basically interpret when you are up or you're done that you are winning or you are losing and you have to be patient in this negotiations, sometimes you are happy with the other side of negotiators the some side, sometimes you are not, sometimes you will think that you are losing sometimes you think you are but you have to bring that to a final end of negotiations with the final papers and then sign them. And even then you have to put a lot of effort that whatever is signed and agreed is becomes lives. So I regard that this is an absolutely on human and not a normal way of living the table of negotiations and trying to solve it by military force. And I don't believe… Yes, go ahead.

Question: But Mr. President, you talk very highly of the OSCE and you evaluate but you still refuse the Russian initiative to end this current escalation?

Answer: Well, I don't know who gave you that thought which is not correct. I think Russia has appealed to both sides for ceasefire and stop the casualties, which is fine. But there is no mechanism and stopping in any military operation or any war effort, you have to have a clear as sort of a mechanism that talks to the others to the sides and basically agrees the timing it is a complex process. That's number one. So that process has not put in in action yet. So it's not only Russia is the United States European Union, France. Many countries have appealed, appealed to both Armenia and Azerbaijan, saying Armenia that will appeal to people of Nagorno-Karabakh Republic to stop it. But in order to stop you have to put pressure first of all on the aggressor in this case, the side that has started this phase of military activities and war is not the people of Nagorno-Karabakh. They don't have any desire to start another war. It's Azerbaijan. So this is not that you apply. There are two sides and Armenian side has started the war the Azeri side started the war. So the pressure should be on their side to stop at the moment they stop it and the Armenian side will stop as one.

Question: Turkey has said that it will support the Azerbaijan in the field and in whatever they need. Does this mean that Armenia is going to seek external supports as well?

Answer: Well, again, this conflict is between the people of the Republic of Nagorno-Karabakh were Armenians. It's not with Armenia and Turkey will support Azerbaijan and is supporting as a budget. To be honest, I personally would love to see Turkey supporting Azerbaijan in education, culture, science, technology, building relations. And I would love to see Turkey, going back to its own history and looking at hundred five years ago at the end of Ottoman Empire when the Armenian Genocide happened. So trying to recognize that and improve their relations or make make relations with Armenia, instead of that they're they're just refusing that genocide has happened. And of course, if genocide if they are refusing it, we don't have diplomatic relations. We don't have relations. Now Turkey is not supporting Azerbaijan. Certainly Turkey has become a side of a conflict because they send their military advisors, generals, military equipment, finances, and very sophisticated weapons to Azerbaijan. Of course, as every time Turkey is trying to sort of is trying to sort of, uh, I don't know, what's the right word to fool the international community, in many cases, be that in Syria or Iraq and Libya, they're always say, a story about I don't know, the PKK fighters, or this time, they are saying, you know, they're there to protect International Energy lines, which is absolute nonsense. Your see international pipelines, which were from Baku to Ceyhan were built 20 years ago. If Armenia had Armenians in Karabakh, or Armenia had any intention of hitting them, they should have hit 20 years ago, not now. That hitting 20 years ago that would stop that pipe pipeline and the next 20 years to Azerbaijan would not make billions and billions they use that billions in order to buy weaponry and fight armies and kill Armenians. But we didn't. The Armenians in Nagorno-Karabakh didn't heat at this pipeline, because we respect international law. And this is a conflict between Azerbaijan and Armenians who think they have the right of self-determination that other nations, let's say in Europe, like ex republics of, of Yugoslavia, or indeed, Scotland, it happens, it's the same thing Scotland was fighting in Middle Ages with England for their independence. But now when they desired, they got a referendum. And if the referendum was, was yes or positive, they would have become an independent state, but their referendum was negative. But now Armenians in Nagorno-Karabakh has said that they had ended in by the referendum, quoting the law and everything. And their response is a middle ages response instead of respecting people's will, of that region, and peoples will live there for thousands of years. They are using the Middle Ages tactics, weapon, the war.

Question: In the future, Mr. President, for this particular region of the world, do you see how does Armenia as a state regard the Armenians in Nagarno-Karabakh? Do you think that you have a responsibility towards them, will it justify a further action.

Answer: Well, of course, if Turkey says that they have some ethnic connections with Azeris or Azerbaijan, they're the same Armenians living there. Well, historic Armenia was bigger, it has become smaller. That's, that's your faith. But these are Armenians. These are not other nations that has ethnic roots with us or connection with this are Armenians that will living there for thousands of years. And of course, Armenia and not only Armenians in Armenia, but Armenians globally have a responsibility. Because if we leave the Azerbaijani side to do the ethnic cleansing, it will just repeat what happened in the Ottoman Empire in 1915. When the Armenians were, well just destroyed and moved out from their historic land. There are no Armenians there, their historic heritage, their temples, their churches, their cities were destroyed. And there is no Armenian culture. And it's not only the one and a half million of people who died, but also a huge history is a culture was destroyed. So shall we sit and look at that this history repeats, repeats again.

Question: It's a complex history, and despite that, point at that aspect of things, would you be willing to accept the UN peacekeeping mission and a ceasefire, a UN Security resolution for instance.

Answer: You know, this is a question that has 26 years of age, this always was discussed about the UN peacekeeping mission and so for. But the both sides for 26 years more or less had managed to leave with a ceasefire, which was broken for a couple of occasions. So both sides are capable of sitting down and negotiating. If this was not the case, I would say, okay, impossible let, I don't know French, Russian or other forces coming standing between them. But for the moment, I think there is an international recognized organization, which is the OSCE in Minsk Group. And there is United Nations. And if these organizations will come with suggestions, I think the first word they have to say to the Azeri side that has restarted military activities, not the Armenian side, Armenians were not even thinking about it. Nobody in Armenia, nobody in Nagorno Karabakh, on that day of 27th of September, Sunday, was thinking of going into war with the Azerbaijan. So, I think if it is UN, OSCE, European Union, NATO to which Turkey is a member and behaving as if it is not a member of that serious organization. If all of this organization could put pressure on Azerbaijan together with Turkey to stop those hostilities Armenians will be the first to say yes.

Question: Mr. President, thank you very much for your time.

Answer: Thank you very much.