Turkey is a threat to the whole region: President Armen Sarkissian’s interview to the Indian WION TV channel 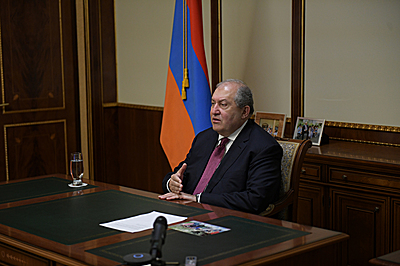 Question: It has been a week since the military actions take place. Have Armenia and Azerbaijan passed to a full-scale war?

Answer: I think we need to be clear that the full-scale war you mentioned, is between Nagorno-Karabakh or Artsakh Republic and Azerbaijan. In fact, Azerbaijan is trying to get rid of Armenians in the region. This area historically belongs to Armenians, where they have lived for thousands of years. People of Nagorno-Karabakh declared their independence in 1991. Instead of following the negotiation process, which takes place under the supervision of the OSCE Minsk Group (Co-Chaired by Russia, France and the USA), Azerbaijan decided to violate the negotiation process and launch a war on September 27th.

This war is between Artsakh Republic and Azerbaijan. Armenians worldwide are gathering to help Nagorno-Karabakh, but the situation is different from other confrontations and battles, because this time Azerbaijan is not alone. This time Turkey joined the war, bringing its officers, generals, equipment, drones and even F-16 fighter jets to Azerbaijan. With the help of the Turks, the Azeris are using all the available equipment not only against the soldiers of the Nagorno-Karabakh Republic, but also the civilian population. Today, while we were speaking, the capital of Nagorno-Karabakh, Stepanakert, citizens, women, children, are targeted by the Azerbaijani side and shelled.

The purpose of all this is ethnic cleansing, the cleansing of Nagorno-Karabakh from Armenians, without taking into account that these people have been living here for thousands of years, not taking into account that it is possible to solve the problem through negotiations, because as I mentioned, Turkey is fully involved. Turkey is now involved not only in Libya, Syria, the Mediterranean, but also here.

Question: This is an old dispute, what do you think, why did it break out now?
Answer: This is not an old dispute; it has a 30-year history. Proud Armenians have lived in these heights for thousands of years.

For 70 years Karabakh was part of Soviet Azerbaijan as an autonomous republic, while more than 90% of the population were Armenians who spoke Armenian and attended Armenian schools. When the Soviet Union collapsed, the people of Nagorno-Karabakh decided that they wanted to hold a referendum. They held a referendum in accordance with all the laws, and in 1991 they declared independence, they wanted to create their homeland. But instead of negotiating, Azerbaijan started firing. This dispute is not old, it is a 30-year dispute. In recent years, the parties have mainly maintained a ceasefire, negotiating at the table of the OSCE Minsk Group Co-Chairs.
Instead, the Armenian-Turkish relations have an old history. This makes imperative the issue of defending Nagorno-Karabakh by the Armenians, because in the last years of the Ottoman Empire, 105 years ago, with the excuse of World War I, Turkey massacred one and a half million Armenians, committing the first genocide of the 20th century. Hundreds of thousands of people left their homeland and settled in the United States, Argentina, Brazil, Europe, Russia, and elsewhere, creating the Armenian Diaspora. Turkey's involvement in this issue causes additional tension, and the question arises why Turkey should be involved here.

The Turkish side comes up with reasons that are not logical at all. They claim that they are ethnically close to the Azerbaijanis. But from this point of view, they can be close to many nations, from northern China to Mongolia, Central Asia, etc. Secondly, they say that there are PKK militants here, but this is an old trick, it does not work in the case of Armenia. And thirdly, they say that there is a threat to the international oil pipelines that stretch from Baku to Ceyhan, which is also an absolute nonsense.

Question: The President of Turkey called Armenia a real threat to a regional peace.

Answer: He can call Armenia a superpower, but will it change anything? How can Armenia be a threat? If he could logically explain where the threat is to the region, considering that Armenia has no problem with anyone in the region. Armenia has excellent relations with neighboring Georgia, excellent relations with Russia and Iran. The only country, which we have no relations with, is Turkey. It closed our borders, blockading our landlocked small country and it even denies the fact of the Armenian Genocide. And the only problem here is Nagorno-Karabakh, which is a small enclave of Armenians. However, the Azerbaijani and Turkish sides decided to get rid of it. This is not the first time that President Erdogan has announced something. For example, in Iraq, Libya, Syria. Erdogan always finds a reason to be involved. I cannot agree at all with what Erdogan said. Turkey, not Armenia is a threat to a regional peace.

Question: You say that this is planned. Who planned?

Question: Why did Turkey do it?

Answer: For several reasons. They may bring different reasons why they did it, but the reality is different. I will mention the opinions of various analysts on this issue. First, they want to tell Azerbaijan that they cannot solve this problem without them. Second, to teach Armenians a lesson, saying that you should not even try to mention what happened 105 years ago, because we will not recognize the Armenian Genocide, and if you do not behave properly, you can see what will happen. In other words, they show their power to scare the Republic of Armenia. Third, they are in Azerbaijan now, I have a question now. When the war is over, will they leave Azerbaijan, or will they stay? By remaining, they will have a huge influence in Azerbaijan. Moreover, they will take control of the oil and gas pipelines, which go from Azerbaijan to West Europe. And it is not only Azerbaijani gas and oil, but also the Caspian, Central Asia. In other words, Turkey, which has no oil and buys it, will now control the oil going to Europe. And Europe will become their captive.

Question: The President of Azerbaijan Ilham Aliyev said that they will proceed fighting until the Armenian troops completely withdraw from Karabakh. The Prime Minister of Armenia Nikol Pashinyan said that it is unacceptable to start negotiations in case of intensive military operations. Taking all this into account, are both sides interested in finding a solution?

Answer: What President Aliyev says is called classic ethnic cleansing, that is, he says we will not stop until we kill all the Armenians in that area. This is called an ethnic cleansing, the cleansing of territories from people who have lived there for thousands of years. The Prime Minister of my country says that when people die there, we must first take steps. First of all, Turkey must get out of this conflict, because it is not a part of it. Imagine that if Turkey is involved, it will be a third or fourth party, the whole region will intervene, and as a result we will have a big mess. It will be ten times worse than we have in Syria. The solution is completely clear: Turkey should not interfere. When the conflicting parties continue to be the same as before, and the parties - Artsakh, Armenia - Azerbaijan, then it will be possible to talk. The military actions will stop, people will not fire on each other, there will be an opportunity to meet the mediators, we will gradually return to a negotiation table.

Question: The leader of Nagorno-Karabakh has said that Turkey is the biggest enemy here, we must be ready for a long-term war. It turns out that all of the parties are involved, it seems that the military actions are escalating and there is no solution yet.

Answer: The Armenian side does not want tension; we are looking for ways to finish all this as soon as possible. The President of Nagorno-Karabakh is absolutely right, because he controls the situation on the spot, he sees that people and soldiers of his country are fighting not only against the Azerbaijanis, but also against the Turkish forces. Thus, there is only one conclusion that the "big elephant" in this room is Turkey, which does not want peace.

Question: The President of France Emanuel Macron stated that he supports Armenia. Russia kept talking with both Armenia and Azerbaijan. Do you think these efforts will help solve the problem?

Answer: We all make efforts to ensure a ceasefire, we talk to everyone. President Macron supports the truth that Turkey does not want to do anything to resolve this issue. We respect the proposal of the Russian President. The Armenian side is always ready to discuss further steps, if the Azerbaijani side says it is ready for negotiations, I must mention that we have never been against negotiations.

Negotiations on this issue have always been complicated. It takes time to reach an agreement between the parties. But at the same time, we must sincerely believe that the solution can be established through dialogue. Negotiations can be held through confidence building.

Question: You also mentioned that the international community should intervene and that it may be worse than it is in Syria. What is the World doing on it? Today the USA is busy with the elections, the relations between Turkey and Russia etc.

Answer: Turkey has caused this problem and should come out. Yes, you are right, the United States is preparing for the presidential elections, and it will be very difficult to attract their attention. Yes, Russia has its own problems. Yes, Europe is very busy. Add to all this the coronavirus and economic difficulties. That is why Turkey and Azerbaijan chose to attack right now. They know that the international community is very busy, they can do whatever they want, they can bring terrorists, jihadists. However, since everyone is busy, the necessary pressure will not be enough. These are their calculations. However, they did not calculate that the people of Nagorno-Karabakh fought for their existence for thousands of years; they will not give up.

Question: Do you believe that the international institutions should send a clear message in such occasions to avoid bigger problems?

Answer: International structures must begin to think about how to reform and become modern in order to face the challenges of the 21th century.

Question: The issue of energy markets cannot be bypassed, there are concerns about gas and oil supplies.

Answer: Nobody poses a threat to oil supplies here. If they have concerns about other sources. I repeat, if the Armenians of Nagorno-Karabakh wanted to shoot at the gas pipelines, they would have done it 20 years ago, during construction phase. If they had done that then, they would not have allowed Azerbaijan to earn billions of dollars, enrich weaponry and shoot at the Armenians today.

I think that the international energy markets should not be concerned about this issue. They should think about Turkey, which exercises control over the gas pipelines.

Question: I will finish the interview with the question I started with. Do you see any perspective in reaching any solution in the coming days or there will be a bigger war?

Answer: I hope there will be a solution. I make a great deal of efforts to reach that solution, because I do not accept the loss of human lives, I do not accept ethnic cleansing, genocides.