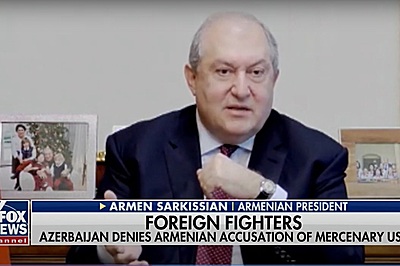 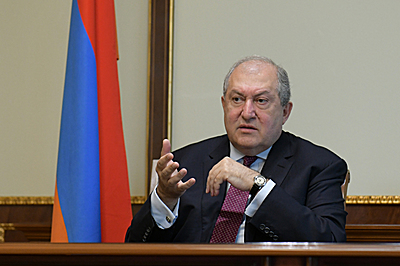 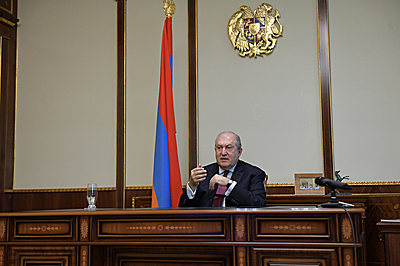 American Fox News Channel referred to the interview with the President of Armenia Armen Sarkissian in which the President presented the situation created by the aggression unleashed by Azerbaijan against Artsakh and expressed concern with Turkey’s involvement.

The abridged version of the interview is below.

The genocide of 1915 looms large as Armenians feel renewed fear and bitterness about Turkey’s involvement in the newly inflamed situation in Nagorno-Karabakh.

Turkey and Armenia still fight about history, with Ankara disputing there ever was a genocide. But the death of 1.5 million Armenians at the hands of the Ottomans is in large part responsible for the creation of the diaspora. There are more Armenians who live outside their country than within it.

And Armenian President Armen Sarkissian tells Fox News his people have no intention of giving up rights to live freely in Nagorno-Karabakh. “This is a fight they will fight a long time, until the death as they say. Every Armenian in the world will support this fight for a simple reason. They see another attempt at genocide by Turkey using Azeri hands.”

The dispute over Nagorno-Karabakh goes back decades but the flare-up within the last two weeks seems to have rattled people within the region and beyond because it threatens to suck some larger regional players into the conflict, like Russia and Iran, both neighbors.

“It has become, it is becoming, a great regional conflict with the potential of becoming another Syria or a big change in geopolitics because Turkey has brought with them also mujahedin–terrorists, Islamic terrorists–into Azerbaijan,” Sarkissian said.

But Syrian President Bashar Al-Assad has said some of his countrymen have gone to join the fight, which gets Russia and Iran nervous.

Sarkissian said those countries have a role to play in helping to restore peace. As does the US. “I would like to use this opportunity to wish President Trump and the First Lady good health,” he said. “And it’s important President Trump return fully to his responsibilities for the Americans and for elections that are coming up, but it’s also important he brings his contribution today because we in Armenia, in Karabakh, cannot wait until the American elections. We need American words and pressure on Turkey and Azerbaijan today.”

While both sides accuse the other of ethnic cleansing, atrocities and land grabs, representatives of each do say at least they believe they could all live together peacefully one day.

But no amount of denying Turkish involvement can convince Armenia’s President that there isn’t a grand scheme here. He thinks Turkey’s President Recep Tayyip Erdogan took advantage of a moment when the world was thinking of COVID-19 and economic crises to make his move. At a time, Sarkissian said, when were in the middle of “the big fight for the survival of humanity.” He called it inhuman.