Azerbaijan and Turkey must be held accountable for bringing paid killers and fanatic jihadists to our region. President Armen Sarkissian's interview to Al-Jarida 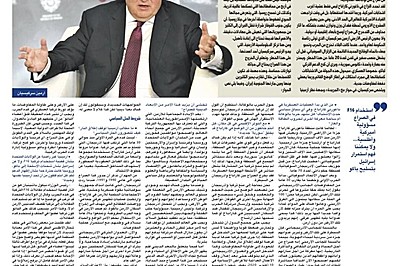 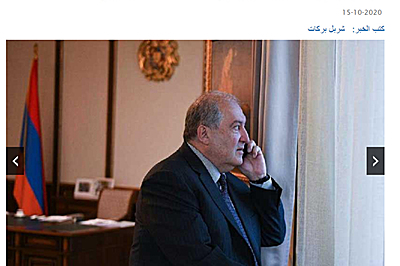 Who started the military actions in Nagorno-Karabakh and in which political context it occurred? Are we witnessing a proxy war? Or another battlefield for energy wars?

Nagorno-Karabakh is a region which was historically part of the Armenian lands and Armenians have been living there for thousands of year. Historically, Nagorno-Karabakh or Artsakh was always a part of Armenia. It is a nice mountainous beautiful region where Armenians, as an indigenous people, were inhabiting those lands for thousands of years and they still live there. Only under the Soviet regime, Nagorno-Karabakh, as an autonomous region, was given by Stalin to Soviet Azerbaijan for 70 years. After the collapse of the Soviet Union, we got the first war and almost 30 years of negotiations. The Azeri side is that it has a legitimate right to free those lands. But free from whom? There are ethnic Armenians 100% living there, and they have been there always. Why one should leave his/her own home just because a newcomer wants to? This is called aggression followed by ethnic cleansing. They want that land without Armenians. For the Azeri side, controlling those lands and justifying their aggression is part of an identify-building narrative, while for the Armenian side, it’s a struggle for life, for cultural heritage and historic memory. It a fight for their houses, parents and children who live there, but who now became direct targets of Turkish drones and Azeri missiles.

So, they started a full war while there is a clear agreement of a cease-fire established since 1994. This is a real war which Azerbaijan and Turkey prepared seriously and long ago. The Azeri sides wants to break the status-quo and impose its will. And Turkey militarily and politically backs this dangerous venture of Azerbaijan pushing the region to the brink of a human disaster. We, Armenians, never challenged any energy infrastructure. Instead, according to some arrangements, Armenia could even export electricity to Turkey as it does for Iran and Georgia. As for your question about a proxy war, I can tell you that Turkey is using Azerbaijan to expand its dominance in the region. By doing so, it threatens the fragile stability in the South Caucasus.

With the regional tension all around, are you afraid the situation in Nagorno-Karabakh will create a new "Syria"?

Yes, I am, because if there is no a strong international reaction to Turkey’s deliberate and unlawful actions in the region, we can turn the region into a Syria-like nightmare. And then, everyone in the region and beyond will be affected. So, if Turkey is not stopped from being directly involved in military offensive activities, the conflict between Nagorno-Karabakh and Azerbaijan may spiral out of control. We need to stop Turkey and Azerbaijan from levelling up the situation in magnitude, in complexity, and creating something that eventually will become another Syria of the Caucasus. Turkey is permanently recruiting and sending war mercenaries, mujahedin–terrorists, Islamic terrorists Azerbaijan to fight against the civilian population of Nagorno-Karabakh-Republic or Artsakh, as we say it. Different countries must interfere and put a strong and unequivocal pressure on Turkey to stop it from interfering in the region. If Turkey is restrained, then we have a chance of an effective ceasefire and negotiations, with a possibility of going back to the negotiation table. This Turkish involvement and the Azeri aggression which didn’t stop even under the declaration of ceasing hostilities for humanitarian purposes on October 10, 2020, give feeling to everyone not only in Nagorno-Karabakh, Armenia but everywhere where are Armenians, and those people who are close to the Armenians, that Turkey wants to repeat something that happened 105 years ago-ethnic cleansings of Armenians from their homeland-and creating another genocide. We-Armenians, in Armenia, Artsakh and Diaspora-will never allow another genocide to happen. Enough is enough.

Azerbaijan authorities proclaimed that Armenians volunteers, especially from Syria and Lebanon, are joining the fight. Is that accurate? Are you afraid that this may increase religious dimensions of the conflict?

After the Genocide of Armenians perpetrated by the Ottoman Empire and never recognized as such by modern Turkish Republic, Armenians were spread world-wide, and became proud citizens of a number of countries: the US, Russia, France, Iran, Argentina, Lebanon, Australia, Syria, Georgia, Singapore, Poland, etc. They are effectively integrated into their home countries and societies, and a humble and law-abiding contributors in economy, politics, culture, sports, sciences, technology, education, etc. of the host countries. When there is an imminent existential threat, Armenians seek to get mobilized globally and they also can come to the Homeland and help their brothers and sisters on the ground. Azerbaijan and Turkey, not Armenia, must be held accountable for bringing paid killers and fanatic jihadists to our region thus making achievement of peace even more complicated. The civilized world should stop this. It is a shame for the 21st century to still have mercenaries who are paid for killing civilians or creating human disasters.

As for the religious dimension, Armenians have nave showed any resentment and intolerance towards other religions. The religious dimension is just excluded from this conflict since the very beginning. Armenia and Armenians have a full respect for all religions and beliefs and thousands years of our history clearly demonstrated our attachment to human values including tolerance and respect for other religions, cultures, race, etc. I don’t know any Armenian having hatreds for representatives of other religions. We adopted Christianity in 301, officially the first in the world. During two millennia, the Armenian nation experienced wars, conflicts, exoduses, and even a genocide, but it never became a blind religious fanatic, as now we see many among those fighting against us on the Azeri side. But you will always find those who want to ignite hatreds and fuel new escalations, and they will say you there is a religious dimension which a non-sense.

Are you satisfied with the Arab gulf countries stance on the situation?

Since the very first day, when the Azeri side backed by Turkey started its unprecedented offensive against Armenians in Nagorno-Karabakh, I was in touch with heads of the Arab countries, such as the Sultan of Oman, the King of Bahrain, the Emir of Qatar, the President of Egypt, the King of Jordan, the Crown Prince of the Emirate of Abu Dhabi, etc. In my letters and phone call I was expressing my deep concern over the spiraling situation stating that regrettably, Azerbaijan’s intermittent war against the people of Artsakh and the Republic of Armenia was nothing new and that for over three decades, Azerbaijan was trying to solve the Nagorno-Karabakh issue through military means and wipe out the Armenian population from its Homeland. And this is unacceptable.

What are Armenia demands for a ceasefire? How do you envision the political solution?

This is not the first time in about 30 years that Azerbaijan, enjoying the overt support of Turkey, perpetrated horrific aggression against Armenians of Nagorno-Karabakh, using a wide range of artillery and rocket munitions, including the banned cluster bombs to target the residential areas, situated far from the line of contact. It is important to remind that the routes of this conflict lied back in 1990-1991, when to the peaceful protests of the Armenians in Nagorno-Karabakh Azerbaijan then-Soviet Republic responded with brutal military force, committing mass ethnic cleansings, and continued atrocities aimed to forcefully squeeze out the Armenian population. The Armenians then withstood the imposed war and enjoyed 26 years of de-facto independent and peaceful life on own Homeland amidst an enduring process of negotiations.

And now, the Turkish-Azerbaijan ongoing aggression the Armenians are facing now comes to expose the genocidal intentions of them, leaving no chance to the local population but to fight again to safe own homes, families, thousand-years old history and monuments.

Therefore, we are more than convinced that the international recognition of the Republic of Artsakh is the only option that might guarantee the security and the right of the Armenians living in here. So the political solution is clear: the only way to prevent the potential genocide and forced displacement of these people is the international recognition of their self-determination.

Are you optimistic about France and Russia and the United States upcoming meetings. Do you think the international intervention will help or complicate the situation?

The international mediation of OSCE Minsk Group that co-chaired by France, Russia, and the United States was one of the factors of lasting peace-oriented to a peaceful outcome, which was blatantly disrupted by Turkey and Azerbaijan blowing up the Caucasus region on 27 September, transferring mercenaries and radical jihadists to fight the Armenians.

Even though the joint statements of leaders of France, Russia and the United States to halt the violence immediately and back to the negotiation table, those were defiantly ignored not only by the Azeri government but first and foremost by Erdogan’s Turkey, who bears responsibility for instigating and militarily involving in Azerbaijan’s unleashed aggression against the Armenians of Nagorno-Karabakh. So, the only international intervention that not only complicated the situation but evoked an existential threat to the Armenians dramatically destabilizing the entire region is Turkey. And here is worth mentioning Turkey’s Foreign Minister Chavushoglu’s statement that his country will continue to stand by Azerbaijan on the ground and on the table, hence confirming Turkey’s military involvement in this war. This fact should inherently raise a concern among NATO members that their ally is an initiator of aggression against its Partnership for Peace partner. With this regard, to my understanding, the imperative for the international stakeholders, particularly to those who are interested in long-term peace or in the conflict resolution namely France, the United States, and Russia and others, is to refrain Turkey, making both Ankara and Baku accountable and responsible for provoking this horrible war.

Armenia is discontent with US over the use of F16 ,and with Israel over the weapon shipments to Baku ,and Russia was very cautious about showing support to you, are you concerned that Armenia will find herself alone?

The issue of Turkish F-16 in this war was raised by Armenia’s Prime Minister Pashinyan, who eventually stated that the United States may want to explain whether those fighter jets were delivered to Turkey for bombing Armenian civilians. It is also about NATO since Turkey is a NATO member and operates those F-16s. I have asked some NATO colleagues to look at this very carefully because we have a situation where a member of NATO-an organization, which has a clear mandate of what to do-is taking part or getting involved in a conflict of third parties, which are not NATO members. Does Turkey have an authorization or a green light from NATO? If yes, we should know that. If not, then I hope that our colleagues in NATO will make their voice heard and put pressure on Turkey that they should not get involved into this conflict because their presence here is not helping at all, it is escalating the situation dramatically.

On the other hand, the issue of Israel’s continued arming of Azerbaijan has long story, which remains confusing for the Armenian society. Even now, at times of the Turkey-Azerbaijan aggression against the Armenians, Israel’s government’s unchanged behavior in arming the aggressor is far from understanding for the Armenian side, who asks a simple question: since the Jewish State is a Genocide-survivor country, so why arming those who wage genocidal war against Armenia? Armenia and Artsakh are not anole, as we are on the side of truth. As for the position of Russia, the President Vladimir Putin made clear that Russia was and will keep its commitments as bilateral and multilateral security treaty ally of Armenia under the terms and conditions of a strategic partnership with Armenia.