No one should have the illusion that any issue can be resolved by force. Interview of President Armen Sarkissian to La Libre Belgique 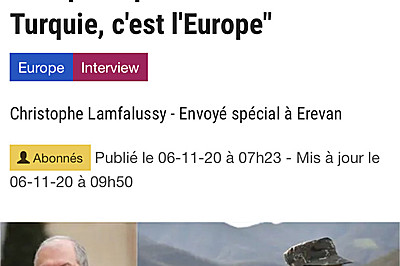 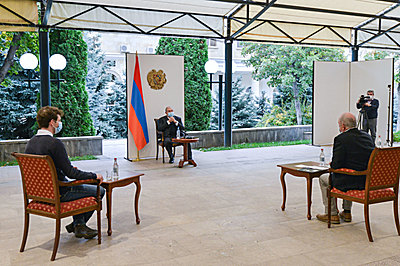 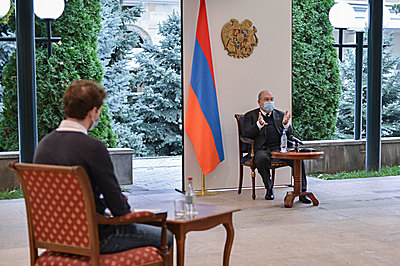 President of the Republic of Armenia Armen Sarkissian gave an interview to Christophe Lamfalussy, the special correspondent of La Libre Belgique, the major daily newspaper in Belgium.

Below is the translation of the author’s interview with a short introduction.

President of Armenia Armen Sarkissian has come a long way as the Prime Minister (1996-1997) and especially as Armenia’s Ambassador to London (1998-2018). Together with this, he has played an important role in business, being a consultant to many international companies, such as Alcatel, Bank of America, Meril Lynch and others.

La Libre Belgique met with the President in Yerevan.

La Libre Belgique: Mr. President, we are coming from the Yerevan Military Cemetery, where we saw dozens of coffins. What is your attitude towards this tragedy?

- Every day we lose lives, young people who will never become fathers, artist or scientists… This is a great tragedy. Those lives were lost whereas there was a way of peaceful solution, elaborated by the Minsk Group, which unites the Unites States, France and Russia. Unfortunately, Azerbijan decided to leave the negotiating table and resort to military means.

- Karabakh is the historical homeland of its inhabitants. These people have been there for millennia. They adopted Christianity there in 301. They had lived there, in their mountains, when the Turk-Seljuks came from Central Asia in the 11th century. They had seen the Mongol invaders, Tamerlain, were part of Persia, and the Russian empires, but never of Azerbaijan.

The problem began when the Soviet Union was created, and Comrade Stalin gave Nakhijevan and Artsakh (to Azerbaijan). If we go back to the beginning of the 20th century, at that time Artsakh had about 350 thousand to 360 thousand inhabitants, the overwhelming majority of 95% Armenians. At that time Shushi was a city with sixty thousand inhabitants, mostly Armenians. It was smaller than Tbilisi, but larger than Yerevan. In the Soviet years, Karabakh was an autonomous region within Azerbaijan. Nagorno-Kharabakh had the greatest degree of autonomy in the world as it was guaranteed by the Soviet Union. This lasted for seventy years. However, over 200 thousand people left Kharabakh. Why? Because there were no Armenian schools, and young people had no jobs. This was a more or less peaceful ethnic cleansing.

When the Soviet Empire collapsed, people wished to live again as they had lived for thousands of years. Baku responded with massacres. How can you live with people who turn you out? There is no trust. They (Azerbaijan) say that they will liberate Kharabakh, but from whom?

La Libre Belgique: Who started this war? Azerbaijan claims to have launched a counteroffensive against the Armenian attack.

- Logics is the reply. What was the point of starting a war, for Artsakh? After the ceasefire signed in 1994, there was the best possible negotiating table. The Armenians restored the mosque in Shushi; they built schools, kindergartens and hospitals there, with the hope that the talks would lead to a normal life.

- Absolutely negative. If Turkey had not interfered, Nagorno-Karabakh and Azerbaijan might have agreed to a ceasefire. Turkey has a much broader agenda: in Syria, Iraq, Lybia, Egypt and the Eastern Mediterranean. It creates instability everywhere and doing so violates the status-quo to attach greater importance to its role.

The main target is Europe. Turkey is playing a lot of cards. One of them is the energy card. Turkey was an energy-buying country. Now they want to have their own and under their own control. And when the Caspian Sea gas and oil are directed to Europe, it will be via the Trans-Anatolian (TANAP),and then the Trans-Adriatic (TAP) gas pipelines. Turkey wants to control the energy flow from the Caspian Sea and Central Asia. The countries of Central Asia and Southern Europe will depend on it.

The other is the refugee card. You have four million refugees on your borders, and Turkey will trade with you. You have already paid six billion euros, haven’t you?

Terrorists will be the third card. Who tells you that they (those who are in Azerbaijan) cannot board another plane and go to Europe. This is another way of pushing people to extremity. Turkey has the same agenda in Lybia: to control the energy flows and to control the doors of the African immigration to Europe.

Europe does not understand that Turkey’s current leadership has a completely different agenda. It does not want to share values with the EU, for instance, tolerance. These people are intolerant. I am talking about the leaders, not the Turkish people. In 2007, famous Armenian journalist Hrant Dink was killed in Istanbul… Hundreds of thousands of Turks said they were Hrant Dink.

- Russia plays an important role in the region. It is a member of the Minsk Group and has good relations with both Armenia and Azerbaijan. Unlike Tukey, Russia can be a mediator. But Russia also understands that Turkey has its role to play. If Turkey uses its influence and puts pressure on Azerbaijan, it will be possible to establish a ceasefire.

La Libre Belgique: Is it still possible to negotiate at the current stage of the war?

- If Armenia does not recognize the independence of the Republic of Nagorno-Kharabakh, there is only one explanation for that. Armenia still sees light at the end of that horrible tunnel. Even if the Armenians are pushed out Artsakh, it does not mean that there will be a final solution. First, because they had fought against all their enemies in the course of their history. Second, there cannot be a final solution, until the sides sit at a negotiating table to sign a peace treaty and shake each other’s hands.

Let me give an example. Turkey massacred one and a half Armenians during the Genocide. Do you think people have forgotten that? The third and fourth generations still remember, and today they become volunteers to fight in Artsakh, to fight against Turkey. If Turkey continues to deny this, do you think that the two nations will be ready to negotiate. No. You can drive people out, but their memory will last from one generation to the next.

La Libre Belgique: In terms of compromises, do you think there should be discussions on a "security zone" around Karabakh?

- Should there be blue helmets and security zones? That is the classical way of resolving conflicts. However, the first thing to do is the ceasefire. There are deaths on both sides, and that will not take us anywhere. There is no final military solution. There could be temporary victories, but the war will continue. It is important to re-establish trust.

- Mutual trust can be achieved during negotiations. I am not a negotiator in the Minsk Group. That role is reserved for the Prime Minister and the Minister of the Foreign Affairs. But I hope that when they return to the table, they will manage to restore mutual trust and reach a final solutin with the support of the internatinal community.

No one should have an illusion that any issue can be resolved by force.