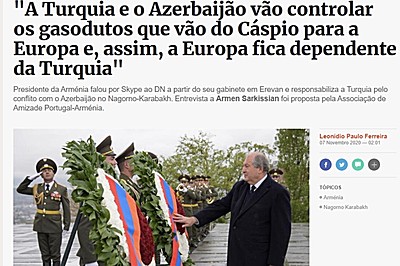 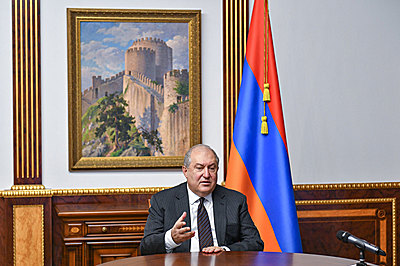 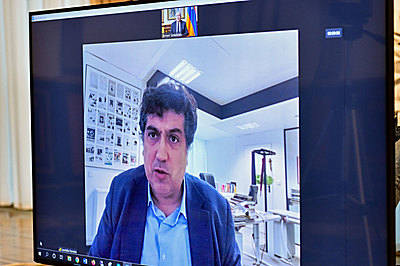 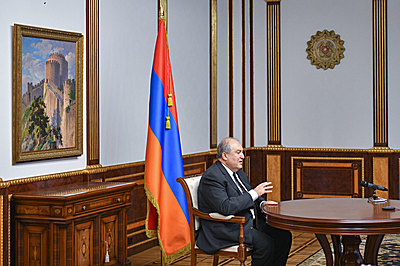 The President of Armenia spoke on Skype to the DN from his office in Yerevan and holds Turkey responsible for the conflict with Azerbaijan in Nagorno-Karabakh. An interview with Armen Sarkissian was proposed by the Portugal-Armenia Friendship Association.

Foto: Ceremony in honour of the Armenian victims of the Ottoman Empire during the First World War© AFP.

Mr. President, can you explain to Portuguese readers the historical origin of this conflict between Armenians and Azeris?

The Armenians in Nagorno-Karabakh, like all Armenians living in their homeland, became Christians in the year 301, was the first country in the world. Of course our neighbors, Azerbaijan and Turkey, came to this area centuries later but that is history. Then the people of Nagorno-Karabakh suffered attacks from Genghis Khan, Timur and the Persians; they were invaded by the Russian Empire, the Ottoman Empire, but they always managed to maintain their Armenian identity and to be part of Armenia in different forms. Different areas of Nagorno-Karabakh territory were governed by different leaders, local kings, etc. It was only when the Soviet Union took over the area that the Soviet leadership, more specifically Mr Stalin, decided to give this territory to Azerbaijan. It was not only this, but another territory of historical Armenian origin was also given to Azerbaijan. There was an illusion in the Soviet leaders that they had a new neighbor, Turkey, not the Ottoman Empire, and that this new Turkey led by a new leader - Atatürk - was a new partner for the Bolsheviks. Because of this, several regions of the First Armenian Republic were offered to Turkey and this historic part of Armenia was given to Azerbaijan. Thus, for 70 years - and only 70 years - Nagorno-Karabakh was part of the Soviet Socialist Republic of Azerbaijan. But even during Soviet rule, with the enormous power of Soviet sovereign government, Azerbaijan showed no sign of tolerance, Azerbaijan showed no willingness to live with the Armenians, and so the clean-up began. To give just a few figures: in the 1920s the population of Nagorno-Karabakh was 250,000, 95% of whom were Armenians. In 1989-1990, when the people of Nagorno-Karabakh were still part of the Soviet Union, according to the Soviet Constitution, they said they wanted to live outside Azerbaijan, they said they wanted to be independent - the Soviet Constitution allowed this - the reaction on the Azeri side was pogroms in Baku and elsewhere, creating one million Armenian refugees, some of whom came to Armenia, some to Europe, some to Russia, some to Canada, but the population of Nagorno-Karabakh had already decreased. Azerbaijan under Soviet rule had already shown that it did not want to live with the Armenians and the policy was to expel them. As a result of these pogroms, Azerbaijan imposed the army instead of negotiating with the people and the first conflict started in 1989-1990 with a cease-fire in 1994 on 12 May. During the first Nagorno-Karabakh war everything was very difficult. The Armenians gained more territory, the ceasefire was signed and in the negotiations on the future of Nagorno-Karabakh the Republic of Artsakh was created with the consent of America, France and Russia. So for 26 years there have been negotiations, I would say in many respects quite successfully because many issues have been negotiated, but on 27 September this year Azerbaijan decided, together with Turkey, to start the war against Nagorno-Karabakh.

Why return to war at this particular time? Do you see reasons for this?

They had been preparing for this war for several years and this shows that they did not want to go ahead with the peace talks. When I say "they", I mean "they". It is Azerbaijan on one side and the Republic of Artsakh on the other. There has been a cease-fire signed by all three parties - Azerbaijan, Armenia and Nagorno-Karabakh, the latter has therefore been recognized as a party. There was a recognition of Nagorno-Karabakh's independence. So what happened? Due to the Turkish factor - pressure from Turkey - the Azeris started the war. Of course the timing was perfect for them, it was decided, hand-picked, because this is the moment when America is busy with the elections; Europe is busy with the Covid, economic uncertainties, Brexit, etc.; Russia is also busy with Belarus, Ukraine, Georgia, among many other things. So everyone is busy and this is a new world where there is not a single superpower that can basically force anything. Of course, the international institutions, starting with the UN and even NATO and the European Union do not have the power or do not exercise it in these kinds of circumstances. The result: the war continues. If it were not for Turkey, there would be plans for a new ceasefire in a week or two, as has happened before, but with the presence of Turkey, the Turkish drones, the Turkish air force, the Turkish generals commanding the fight... Turkey has taken a few thousand terrorists from Syria and Libya into the area.

How does Armenia support Nagorno-Karabakh in this conflict? It is the same people, although officially they are different countries, but they are together in the war.

It is a very natural thing. There is no official Armenian army in Nagorno-Karabakh, but there are so many volunteers who want to fight, and there are many Armenians from the diaspora who want to come and fight. One of the main reasons for this is not only to protect our historical territory, our brothers, and sisters, and to safeguard our heritage, our churches, our history, but also because Turkish involvement here makes everything much more complex, and every Armenian from Argentina to Portugal, from California to Moscow, from France to Beirut, this is reminiscent of the Armenian genocide by the Ottoman Empire 105 years ago - the same false reasons, the same objective. It is a classic, to expel Armenians from their historical territory.

How do you deal with the war crimes charges on both sides?

I don't think I have to deal with the fact that we are in the war, correct? First of all, the war was started by Azerbaijan, and when they started it, they attacked the capital Nagorno-Karabakh, attacking the city where civilian citizens live, with great loss of life for children and elderly people. In fact, I think that when we talk about war crimes it is a very serious thing and I am sure that the cases against Azerbaijan will be taken to international institutions and courts. Azerbaijan was the side that started the war. The Armenians had no intention of starting a war, they did not. It was the Azeri side that started the war. Of course, every time there is a ceasefire agreement in Moscow, Geneva, Washington, the Azeris are the first to break the ceasefire immediately. Our country responds immediately in public relations. Then there is Turkey, which is amazing, which speaks on behalf of Azerbaijan. This shows that there is no intention of peace on their side and that there is no restriction in their means when they use Turkish arms, Turkish soldiers, Turkish drones, Turkish artillery, everything. They have no limit, so to think that they will not bomb, that they will not commit internationally recognized crimes, is not realistic. In the case of Armenian bombing of cities in Azerbaijan, there is a difference because in Nagorno-Karabakh all military units are located outside civilian settlements. Do you know why? For one simple reason, because people are there to defend their homes and when we defend our home we don't put the gun inside, we take it outside. Azerbaijan attacks civilian targets like villages and cities, knowing that there are no military units there. In the case of Azerbaijan, there are drone centres, heavy artillery and missiles, actually located in the city. In some cases, the Nagorno-Karabakh defensive army also hits civilian targets, which is unfortunate because every loss of a civilian life, no matter which side, is a great tragedy. It is a great tragedy, but my words are quite simple, I say to the Azeri side: stop the war, start a cease-fire and return to the negotiating table, because I do not believe there is a solution to any conflict in a war. In the end, it always ends at the negotiating table, whether it is a big conflict or a small conflict, it does not matter.

How important can Russia be in helping to achieve new negotiations and peace?

I think Russia is the most important state here for several reasons. Firstly, Russia is one of the participants in the peace group; secondly, Russia has good relations with both Azerbaijan and Armenia. Russia has been in this area for centuries, it knows Armenia very well, it knows Azerbaijan very well. Russia also has a kind of love-hate relationship with Turkey, but it has relations with Turkey. So Russia is the country best placed to mediate and broker a cease-fire. Why does the other side not want a cease-fire? I think the reason is very simple: because it is not a conflict between the people of Nagorno-Karabakh or the Republic of Artsakh and Azerbaijan, it is now a conflict between the two plus Turkey. Turkey is not interested in ending this war because it has its own agenda in relation to this problem. The Turkish interest in this war is different, but they have come to teach Azerbaijan a lesson: If you cannot solve the problem, we will solve it for you. They have come to give another lesson to the Armenians: Don't try to go around the world to implement the agenda of recognizing genocide. But we have already achieved it, we have recognition of genocide in many, many places, from the US Senate to the German Parliament, in France, in Russia, in many countries. And there is another lesson, which is also for Europe, is for you, especially for Southern Europe, and whose message is quite simple: Turkey and Azerbaijan will control the gas pipelines from the Caspian to Europe, and thus Europe will become dependent on Turkey. You also have another card which is that of refugees - there are four million refugees on the borders of Europe - and these refugees are also from Syria. Turkey created this conflict, but the problem now is that Syria is the creator of the refugees and Turkey is bullying Europe saying it will send them there. Europe is paying a high price to Turkey to take in the refugees - six billion that are obviously not used to improve the lives of refugees, who are another tool in Turkey's hands. And then there are the terrorists - seven thousand terrorists who are trained by Turkey and used in Syria, Libya and now Nagorno-Karabakh. The terrorists in Afghanistan have ended up in Europe and New York. Do you remember 9/11? So Turkish rule is absolutely negative here. That is why there is a strong link between the Turkish threat and the Armenian diaspora, because most of the Armenian diaspora was created after the genocide. Thus, although four or five generations have passed, Armenians feel the pain of genocide and will never forget it. That is the reason for every Armenian in the world, no matter where he or she is, to support Armenia and Nagorno-Karabakh, because they do not want another genocide to happen.

How important is the Armenian diaspora in making this conflict known?