How could Israel, not having healed the wounds of the Holocaust, help destroy us? Interview of President of Armenia Armen Sarkissian to the Israeli Yedioth Ahronoth newspaper 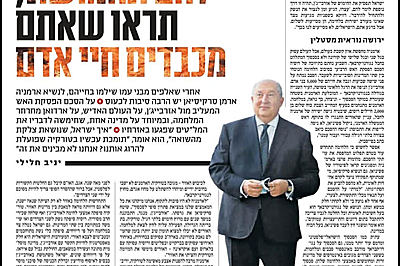 The authoritative Israeli newspaper Yedioth Ahronoth touched upon the Karabakh conflict and Israel's supply of weapons to Azerbaijan, publishing excerpts from an interview with the President of Armenia Armen Sarkissian. The interview was held before signing the trilateral ceasefire agreement.

“How can Israel, not having healed the wounds of the Holocaust, help Turkey that tries to destroy us? We do not understand that”, said President Armen Sarkissian to the Israeli Yedioth Ahronoth newspaper.

“Stop supplying them with weapons. They take human lives away,” the Israeli journalist quotes President Sarkissian, adding that the President of Armenia has many reasons to get angry: the indifferent world, the shooter of war Erdogan, and especially the country, which armed the enemy with destructive ATS.

The journalist writes that the President of Armenia, restraining his pain and anger, says, "I am trying hard not to give way to my feelings so that I can work effectively, work for peace.

But we cannot do it alone. If the Israeli side stopped supplying weapons to Azerbaijan, it would be another way to tell them to "make a pause." "At this moment, you Israelis are not helping us to achieve peace."

The journalist states that Israel's involvement causes bewilderment in Armenia and quotes President Sarkissian, "We knew that Israel had been supplying arms to Azerbaijan for years. But as we understand, they should have been reconnaissance ATS, not attack. Actually, from the very first days of the war, Azerbaijan used the Israeli ATS to attack the peaceful population of Nagorno-Karabakh. We understand that you had an arms supply agreement with Azerbaijan, but at least during the war, Israel should have stopped that supply. I spoke to President Reuven Rivlin and asked for clarification. "In response, he sent me a diplomatic letter without answering the question of why Israel continued to supply weapons to Azerbaijan during this bloody war."