We must stabilize the situation and focus on numerous issues. Interview of President Armen Sarkissian to periodical El País 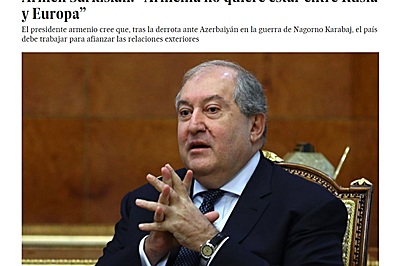 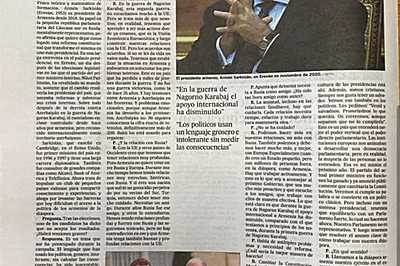 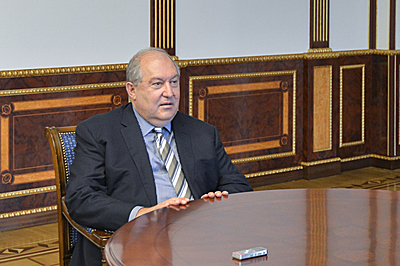 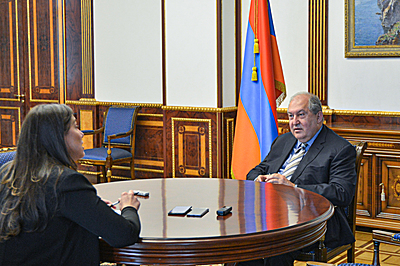 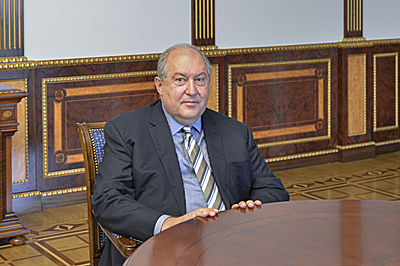 The authoritative Spanish periodical El País published an interview with the President of the Republic of Armenia Armen Sarkissian. Below, we present it in partially abridged translation.

The President of Armenia believes that after the defeat in the Nagorno-Karabakh war, the country should work to strengthen foreign relations as well.

Theoretical physicist and mathematician Armen Sarkissian has been the President of Armenia since 2018. His role in the small parliamentary republic of the South Caucasus is largely representative, but he says there must be constitutional changes that will transform the system to a more presidential one.

In a rather lengthy interview at the President’s Residence a day after the parliamentary elections, he insisted that the change would resolve many of the country's current problems.

Sarkissian, who taught at the University of Cambridge (UK), was the country's Prime Minister in the years 1996-1997, and he has diplomatic experience of many years. He has also been a consultant to major companies such as Alcatel, Bank of America and Telefónica. Now, he is trying creating a club of small but successful countries, which will become a platform for the exchange of knowledge and experience. He is also in favour of removing the barriers that today prevent the Armenians living in the Diaspora from partaking in the country's political life.

El País: After the parliamentary elections, one of the candidates announced that he does not accept the results. Do you think there will be serious tension?

- I was concerned about this issue during the whole campaign. The language used by the politicians was rude, intolerant, impulsive, and that is unacceptable. I was worried because I thought we might face a possible confrontation, but we would most probably avoid it.

El País: There are people who fear that the Nagorno-Karabakh conflict may resume. Do you consider it possible, or will the agreements reached, be kept?

- This is not a peace agreement, it is a statement on the ceasefire, in which there is a third party, Russia, the guarantor of the ceasefire. Russia's role is important here. Russian peacekeepers will be there (in Nagorno-Karabakh) for at least five years.

El País: And do you think Russia is doing a good job?

- If Russia is not there, the situation will be absolutely different. Is there anyone who can guarantee me that Azerbaijan, together with Turkey, will not dare to enter that territory? It is clear that this ceasefire, agreed between the three parties, and perhaps, the fourth party behind the scenes, Turkey, which is, like your country (Spain), a member of NATO, and which had used NATO weapons against Armenia.

El País: Do you think that relations with the EU should be strengthened?

- During this second war in Nagorno-Karabakh, the voice of the European Union did not sound. But here, it is more about us: we must learn to be more active within the Union, we are already in. It is the Eurasian Economic Union. Then, we must build our relations with the EU because we are part of special relations, and special agreements, it is quite a deep connection.

But agreements are agreements. If they are not brought to life, then they have no value. We need to stabilize the situation in Armenia, and focus on solving numerous internal problems. We are a country that lost thousands of young people during the war. There is tension on the Armenian-Azerbaijani border. There are many emotional problems because although Armenia has returned all the captives, Azerbaijan refuses to do so. Baku uses them for bargaining. It is wrong. You cannot use human life for trade.

El País: What about the relations with Russia?

El País: You mentioned that Armenia needs Russia as a friend. Are you still as good a friend as you used to be?

- Who can evaluate it? Presidents in their discussions with presidents? People with people? ... You need to take care of friendships, even family relationships. Every relationship requires time, effort, and hard work to keep it alive, productive, and useful.

El País: Do you think you cared enough?

- We can do more in our relations with Russia and Europe as well. Especially in the case of Armenia, which is a small country but a world nation with millions of compatriots in the Diaspora, we must work more actively. This is what I would advise the next government: to be more active and listen to their friends to work more effectively with them. It is obvious that the international support to Armenia during the Nagorno-Karabakh war was less, as compared to the first Karabakh war in the early 1990s, when the Armenian army won.

El País: You are talking about a lot of problems and the need for reforms. How to do that more correctly?

- Changing the Constitution. Many of our problems are related to the incorrect Constitution. With the amended Constitution in 2015, the country did not become parliamentary, it became prime ministerial. To take a right decision, one must bear responsibility. According to the current Constitution, the Prime Minister has all the rights, and mainly, he is not accountable to anyone; he is accountable only to the parliament, that is, to himself because he has a parliamentary majority. When there is no culture of parliamentary institutions, and we do not have it, this cannot work effectively.

El País: What change should there be?

- Armenia was part of the Russian Empire, and then part of the Soviet Union. Then, we became a presidential republic. There is a culture of the institution of the president. Besides, we are Christians, we always want to have a saviour. This is also reflected in our attitude towards politicians. We say: "Come, and save us, make the best promises, we will believe you, even realizing that you will not fulfill them." From a cultural viewpoint, the country understands the vertical, i.e., the presidential power, better than the parliamentary power. European institutions have been urging us to develop parliamentary democracy, but in reality most people do not understand that. This will be my mission for the coming years.

But even in the case of a presidential system, we have to balance it with a strong parliament, which is not done now. Our parliament is not representative. We must have a parliament whose members will represent specific people, specific places, and specific cities. And afterwards, the other key issue must be resolved: how to work with our Diaspora.

El País: In what sense?

- We call the Armenian Diaspora those Armenians who live abroad. It is our national value, we do not use it. We have built barriers to prevent our compatriots from the Diaspora from entering our country from a political viewpoint. To become an MP, you should have lived in Armenia for the last four years, and have only an Armenian passport, which is so absurd. The same goes for the president, to live in Armenia for the last six years, and have only one, the Armenian, passport. But when your strength is human value, you need someone who has a lot of life experience, who has travelled, lived and worked all over the world. Numerous Armenians worldwide are involved in politics and business. None of them can make a political contribution to Armenia today. You can't help a country with charity alone. World experience and knowledge are the real wealth. Imagine if there were 15 million instead of the current 3,5 million Armenians.

El País: One of the most serious accusations leveled at Prime Minister Nikol Pashinyan and his government is that negotiations on Nagorno-Karabakh agreement could have been different. Is that so?

- I don’t like to make assumptions. The Prime Minister and I are two different generations, and people with different experiences. We even know the adversary, Azerbaijan, differently. Therefore, the results could likely have been different. I cannot say exactly what because it is not only the negotiators, who play a role here, but also the external factors, how they affect you and your opponent. However, I think that in this case, we should forget about it and focus on the future. There have been episodes in our history that we will never forget, such as the Genocide. It is also important that the other side understands that if you do not tolerate other people's values, culture, and history, then you cannot build relationships. Relations with our neighbours will not be built, based on borders or the number of soldiers. Twenty-six years ago, the same countries went to war, the Armenians won. Do you know what will happen tomorrow? Now, Azerbaijan can take a simple step: return the Armenian prisoners of war home. It will be a small but important step towards building a broken relationship. Turkey wants to regulate relations with Armenia, and that is normal, Erdoğan was not the organizer of the Genocide 106 years ago. But you have to be strong to apologize. Apologizing is a strength, not a weakness.