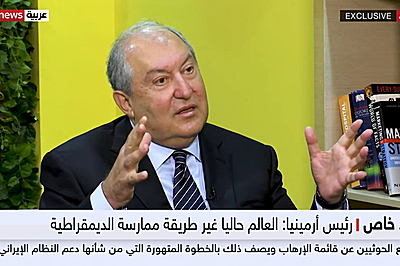 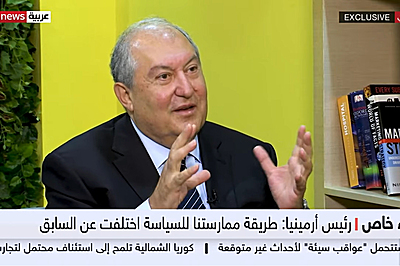 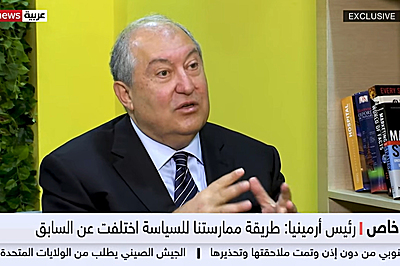 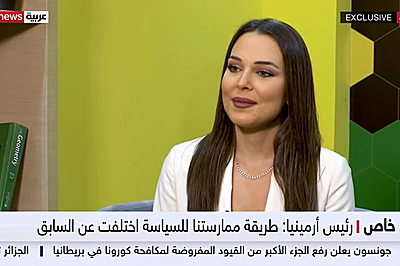 During his working visit to the United Arab Emirates, the President of the Republic of Armenia Armen Sarkissian gave an exclusive interview to Sky News Arabia.

Sky News Arabia - How do you assess Armenia's participation in Dubai Expo 2020? Does it reflect the ethnic characteristics of Armenia and growing technological ambitions?

Let me begin by presenting my remarks on Expo 2020 and Abu Dhabi Sustainability Week conference. I think you have created a wonderful atmosphere here. This is a good platform not only for all those who live here in the Emirates but also for the international youth who can come and see.

To date, I have gone through four stages of life. In the first stage, I was a scientist, a physicist, a mathematician. In the second, I was a diplomat; in the third, I was a free man, and I was doing business; in the fourth I am a president looking to the future. Science and technology have always interested me, and I see the great growth of this country in those fields. There are some structures, environments, or presentations that characterize a country, but at the end, it is all about the technologies aimed at the future. Our future is to build a technologically advanced world. We must create a future that is predictable and sustainable. The word ‘sustainable’ probably has many meanings. It can mean building something that is predictable, clear, something that does not evoke a sense of uncertainty. The world around us today is, in fact, dealing with uncertainty everywhere. There are several reasons for this. Some people say the reason is the COVID. Others say, the world has changed because of the COVID. They say that international organizations have failed or become weaker, and also that the unipolar world is becoming multipolar, etc.

My answer to that question is the following: the world has changed because it has changed fundamentally. As a former physicist, I think this world is quantum. It is not the classic world we used to know. We, as individuals, express ourselves as quantum particles because we are interconnected. We communicate at the speed of light, we live in a very complex world that is new and quantum. It changes the rules of the game. People travel by big planes, they are in the same place for hours, and they breathe the same air. So, it was not surprising that one case of COVID detected in China spread so quickly, and the next case was already in Argentina, etc. Thus, COVID is not the cause of change. The world has changed that is why we had COVID, and maybe, we will get something.

And what is the solution in this case? Why did we get to this point? The reason is scientific and technological progress. Mankind went through the first and second industrial revolutions, learned how to burn wood and coal for energy. Then, we created the computer, which caused another revolution. Today, we live in a period of constant revolution. I call it R-evolution, in which R means rapid. We innovate every day, come up with new ideas, and thus, the world becomes very quick and interconnected. That is why, we often see these revolutions happen much faster than some institutions or our behaviour can react.

Sky News Arabia - What can you say about politics? How can all these changes affect politics, the region?

- My son and I recently completed a research project called The New Quantum World. It is about the quantum behaviour of politics. Factors, seeming to be secondary some 30, 60 or 100 years ago, are becoming as important today as your policies. It might have seemed impossible 50 or 60 years ago to imagine that an unknown-to-the-public politician could quickly become famous and the leader of the country in about three months. There are already several examples of this around the world today. Entertainment has always been next to politics. There were gladiators in ancient Rome...

Entertainment and politics go hand in hand these days, and many politicians get engaged in politics as they were good entertainers. The result is a synthesis of real and entertaining politics. Sometimes, we also call it populism. The basis of all this is the R-evolution and new technologies. The more technology develops, the more the world around us will change. The ways of implementing a business or a policy, of protecting the environment or damaging it, will change.

Sky News Arabia - We would like to touch upon everything that is happening in the region related to Turkey and Azerbaijan.

- I would like to address this issue in the context of the Sustainability Week conference. Sustainability is important, but it is not just about the economy, economic growth, or the future of our children. Sustainability is also important in politics. I will present it in two points. If you are pragmatic and want stability, you will not find a better way in a difficult situation than to negotiate and talk. Armenia and Azerbaijan had a platform for negotiations, which was the co-chairing of the OSCE Minsk Group. Unfortunately, those negotiations did not succeed, we had a war, which was the worst option. During the first Karabakh war, the Armenian side won and had 26 years to transform that victory into a lasting peace. But Armenia did not succeed in that matter, and as a result of all that, we had a war, and lost thousands of young lives.

Before the New Year, I visited Yerablur, the burial place of our young heroes.

The hardest thing in this world is to see their parents mourning the loss of their 18- and 19-year-old sons, when talking, negotiating, diplomacy could have solved this problem without the loss of these young lives. A ceasefire established, there is no complete peace; negotiations are taking place, carried out by the government on the Armenian side, the Prime Minister, on the Azerbaijani side - the President of Azerbaijan, and Russia is the mediator. I hope that as a result of these negotiations, we will have a lasting peace, based on pragmatism.

I hope that this time, Azerbaijan and Armenia will be able to establish a lasting peace through compromises. But it is not easy.

You mentioned our relations with Turkey. Pragmatism and stability suppose that you should not have problems with your neighbours, especially a neighbour who is a big country with a unique behaviour in Syria, in the eastern Mediterranean, and many other places. Again, I think in this case, there is no other way but to talk. Armenia and Turkey once tried to negotiate in October 2009, and even a protocol was signed in Zürich. For several reasons, I was also skeptical at that time. One of them was that in those talks, Azerbaijan was absent on the Turkish side. Armenia had problems with Azerbaijan and would not have reached an agreement with Turkey without Azerbaijan. The Diaspora was absent on the Armenian side. The Armenian Diaspora mostly formed because of the genocide. How could any president or prime minister of Armenia be able to sign an agreement without the support of the Diaspora? Armenia is a small country, but Armenians are a global nation spread all over the world. There are as many Armenians living in the USA or Russia as in Armenia ...

Negotiations are the way to a sustainable future. However, these are not simple negotiations between the two countries. In this case, you cannot ignore the story you went through. A good example can be the following: about two years ago, I attended a large conference in Israel dedicated to the memory of the Holocaust.

The leaders of different countries, the presidents of Russia, France, Italy, and Germany, the vice-president of the USA, and others took part in that conference.

People made speeches and laid flowers. However, I was waiting for the speech of the President of Germany. To be honest, he made a great speech; especially to me, it was the most significant moment in that conference because if Germany and Israel had tried to negotiate after World War II without talking about the Holocaust, would they have succeeded? No. The Armenian-Turkish relations are in the same context. I think to succeed, you must not turn a blind eye or ignore the obvious. These are not easy negotiations. I hope that one day, Armenians and Turks will succeed in this issue, but to do it, we cannot ignore the historical realities. We must be pragmatic to succeed and to be able to build stable and firm relations between Armenia and Turkey, as well as in the region.