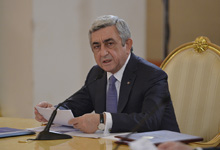 Today, at the session of the CSTO Collective Security Council, President of Armenia Serzh Sargsyan made a statement. He spoke about the process of implementation of the decisions made at the September session of the Council, priorities of Armenia’s chairmanship in the Organization, forthcoming events to be conducted in the framework of the CSTO and touched upon the international and regional issues and challenges. In this context, the President of Armenia said in particular,

Destruction by the Turkish armed forces of the Russian SU-24 aircraft has become a serious challenge for the efforts aimed at countering terrorism, resolution of the situation in Syria, and establishment of peace in the region. Each and every kind of backing terrorism deserves harsh criticism. In the evolvement of the situation related to the downing of the Russian aircraft, we witnessed how active political and military alliances are being formed. Unequivocal support extended to Turkey by the NATO member states, including, for instance, Greece reveals that “one for all, and all for one” principle is an indispensible prerequisite for the efficient functioning of such structures. Even though actions of Turkey disagree with all norms and principles of friendship and good-neighborly relations, even though it shot down an aircraft, which was carrying out a military mission of utmost importance for the international community in its fight against terrorism not a single NATO member state questioned the actions of the Turkish side. We need to learn from that.

There is no doubt that each country has its own interests and priorities, but they should not be cited against our shared interests and mutual obligations. Every time when the armed forces of Azerbaijan use guns, rocket mortars, or artillery against the Republic of Armenia, they are firing at Astana, Dushanbe, Bishkek, Moscow, and Minsk. I would like to remind that we have a corresponding article in our Charter, and if we don’t implement that article, if we don’t discuss the situation, if we don’t view it as necessary to pick up the phone and make a call to learn what’s going on in the allied Armenia and along with that vote against each other’s interests in international organizations, adopt with third countries bilateral declarations the essence of which is aimed against the CSTO allies, we simply bring under that fire our entire Organization, its reputation, and significance.

Azerbaijan’s policy is directed at the escalation of the conflict. Unfortunately, after the session in Dushanbe the situation has not improved but has acquired even more acute nature. The Azeri side does not confine itself with the use of heavy artillery, including that of Turkish production. For the first time since the establishment of a cease-fire regime in 1994, on December 8, 2015 the Azeri armed forces carried out tank shelling, which has raised the existing tension on a new, much more dangerous level.

Taking into consideration precarious situation in the region, one should not rule out the possibility that Azerbaijan has taken this step by the tip or support from without.”