Statement by President Serzh Sargsyan at the Eastern Partnership summit 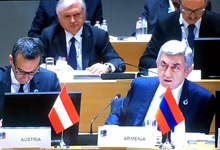 I am grateful for the patient preparatory work and excellent organization of this Summit.

I would like to mention that we consider 2017 as, indeed, one of the important milestones in the quarter-century-long history of relations between Armenia and EU, which is signified today under the framework of this Summit by signing of the Comprehensive and Enhanced Partnership Agreement. It is a comprehensive document that reflects the significant developments of the recent period of our collaboration and defines the guidelines that are necessary to deepen these relations.
This Agreement is not merely a legal document, but a reflection on the wealth of values of human rights and fundamental freedoms that we share. Important elements of the strengthening of democracy such as rule of law, consolidation of judiciary, development of public and social institutes, good governance are the core of this Agreement. The efficient realization of these elements is of vital importance for our nation in order to implement successfully the envisaged reforms. It is exactly the development based on these shared values that ensures the long-lasting and sustainable development for any responsible member of the international community. I thank the leadership of the European Union for the support provided throughout this process.

The importance of this Agreement is not limited to the Armenia-EU relations: many international counterparts of ours describe Armenia as a nation that brings various integration processes closer to each other, a nation that is led by a desire to reconcile and complement interests in the spirit of cooperation and cohabitation, and it is something that seriously obliges us to meet the expectation. I would like to underline that throughout this process the objective Armenia pursued from the very outset was further deepening of our bilateral and multilateral relations.

The Comprehensive and Enhanced Partnership Agreement between the Republic of Armenia and European Union is our joint achievement, and it can become a positive precedent for other cooperation projects. I congratulate all of us upon this occasion.
Dear colleagues,
The achievements registered in the course of the past two years have been to a large extent conditioned by the results of the Riga Summit, in particular, by the joint endeavors taken for the implementation of the clauses related to Armenia in the Joint Declaration adopted at the Summit, Armenia, perhaps, is one of those EU partners that was able to almost fully implement commitments undertaken in 2015. We believe that Armenia’s determination in this process, as well as determination of our EU partners will soon result in bringing our societies closer to each other, for which, of course, launching of the visa liberalization dialogue would be of great significance.

We arrived to Brussels convinced that this Summit will be an important milestone for the Eastern Partnership. From the outset Armenia supported this cooperation format since we believed that this partnership was draught in order to encourage sustainable regional development and serve as a unifying factor, thus removing the dividing lines and reinforcing the human and peoples fundamental rights.

Once again, the President of Azerbaijan has voiced ill-grounded accusations against Armenia. As much as the Azerbaijani side may try to distort and misinterpret the essence of the Nagorno-Karabakh conflict and its peaceful settlement, the conflict has to be settled on the basis of three principles of international law: non-use of force or threat of force, territorial integrity and the peoples’ right to self-determination as proposed by the OSCE Minsk Group Co-Chairs, which is the only structure vested with an international mandate.

The position of the international community on the Nagorno-Karabakh conflict is reflected in the statements issued by the leaders of the OSCE Minsk Group Co-Chair countries. In this context, any solution to the conflict without the exercise of Nagorno-Karabakh people’s right to self-determination is simply impossible.

I also want to emphasize that each conflict is unique in its nature, essence and background, and in this respect, it would be wrong to apply similar approaches to different conflicts.

Another remark: the UN has never adopted a resolution regarding the settlement of Nagorno-Karabakh issue. The four resolutions adopted by the UN in 1993 were about the ceasing of hostilities in Nagorno-Karabakh region, which Azerbaijan has ignored so far. And now, as 25 years have passed, in my opinion, it is irrelevant to say that Armenia has not fulfilled its commitments.

I strongly hope that resolution of the existing issues in the Eastern Partnership region will let us have a more peaceful and prosperous Europe.

Armenia will continuously and faithfully be devoted to its vision of consolidation of peace and sustainable development.