Armen Sarkissian visited the Supreme Judicial Council: There can be no state without justice and justice system 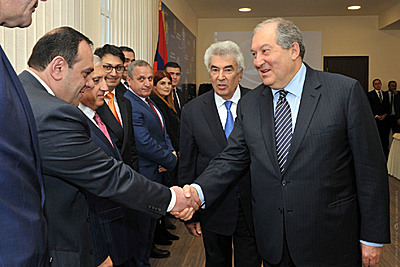 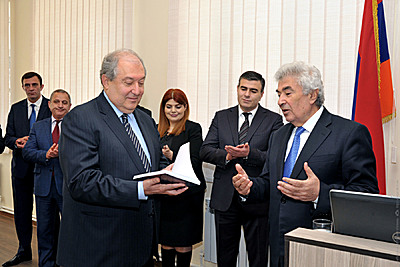 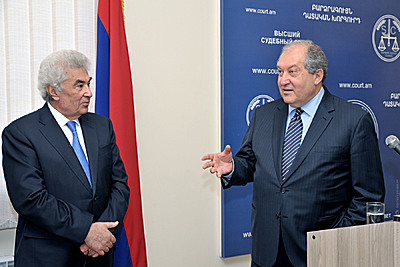 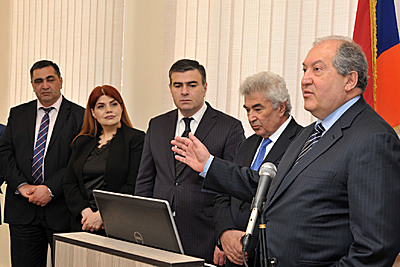 The Chairman of the Council Gagik Harutyunian presented the one year activities of the structure headed by him and the Annual Report which recapped the work and singled out strategic priorities for the reformation of the judicial system.

Gagik Harutyunian presented also the results of the monitoring conducted during one year in the judicial power, guidelines for the development of the e-justice, and the road map.

The President congratulated the staff of the Supreme Judicial Council on the one-year anniversary. Noting that the SJC and the judicial system are among the most important institutes of our country, President Sarkissian said, “In any country, and in Armenia in particular, the attitude towards the state is being formed by the public’s attitude towards the court and the justice system. There can be no state without justice and the justice system.”

According to the President, the state’s attitude towards the public and vice versa – the public’s attitude towards the state, are measured by very simple standards. As an example, he spoke of the attitude of a person on the street towards a policeman, “If one treats a policeman as a representative of the state, with deep respect and the police is behaving accordingly, as a representative of the state, it shows a harmony between the public and the state structure and in some sense, a state built on justice.”

According to Armen Sarkissian, to decide whether a state is just or not, whether there is corruption or not, one should look into the courts, and it is very essential for the justice system to be the best, inspiring the public with confidence. With this regard, the President highlighted the importance of the role of the SJC, the entire judicial system and, of course, relations with the society.

Assessing the results of the one-year works as impressive, President Sarkissian hailed the use of some elements of artificial intelligence in the presented electronic system. “It is commendable that the institute such as the judicial system, which in a certain sense is classical and conservative, is looking forward, changing in step with the society and the world,” President Sarkissian said and added, “This is a road we all have to pass, because the world is moving in that direction.”

According to the President, the work of the judges and the judiciary along with gathering huge amount of information, will make the next step – analysis. “In a couple of years, artificial intelligence will become each judge’s also your Council’s best friend because it will allow you to work much more efficiently, analyze huge volumes of data. Artificial intelligence will change our life, and the change must start now,” President Armen Sarkissian underscored.

The President wished the Supreme Judicial Council new success and assured that in the person of the presidential institute they would have their best friend, which would assist the Council in its maturing, would assist in changing considerably the attitude in our country towards justice and the justice system, and we all would have deep respect for our state and statehood.

Afterwards, accompanied by Gagik Harutyunian, President Sarkissian toured the premise of the SJC, familiarized with the conditions and the work management.