President Armen Sarkissian visited the ninety-nine-year-old veteran in his home: We will celebrate your 100th anniversary together 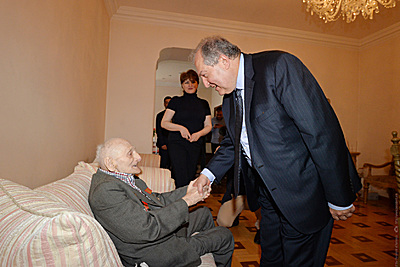 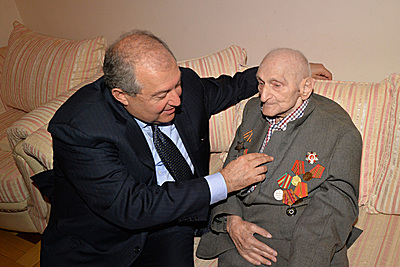 Mikit grandpa turned 99 today, and along with the good wished of his family, the visit and wishes of the President were special. President Sarkissian and the veteran, who had fought during the entire war, spoke in a cordial atmosphere about yesterday, today, and tomorrow, starting from the inferno of the war and up to today’s Armenia and the Armenian people.

During the frank conversation, President Sarkissian inquired about Mikit Amirian’s health condition, asked about his family and life. The ninety-nine-year-old veteran started his military service in Caucasus, fought in Ukraine, Poland, participated in the liberation of Prague and Berlin. Along with cordial congratulations, President Armen Sarkissian expressed also his gratitude to the veteran and in his person to all veterans for the victory, their contribution, and dedication to Fatherland. Armen Sarkissian congratulated and thanked once again for the hospitality and expressed confidence and promised that next year they would celebrate together the centennial of Mikit Amirian.