President Sarkissian participated at the opening of the Crans Montana Forum: I am confident that the 21st century can be the time not only of superpowers but also of successful small states 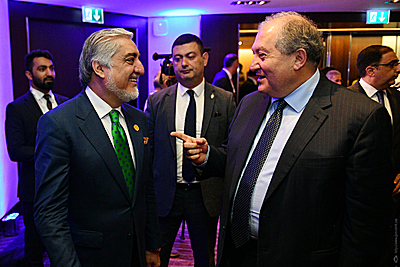 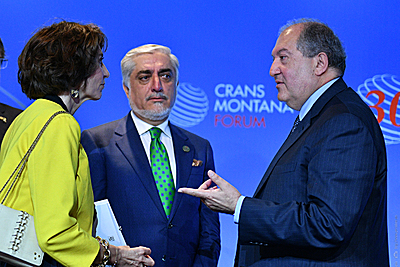 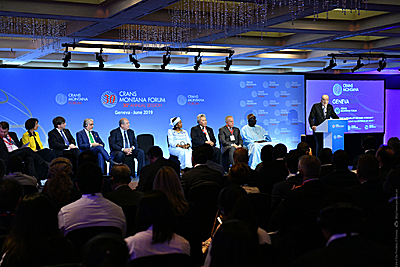 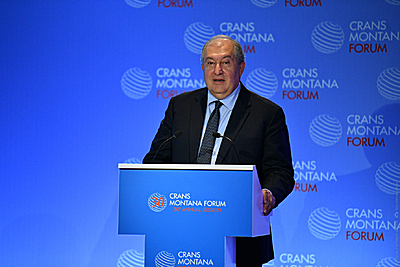 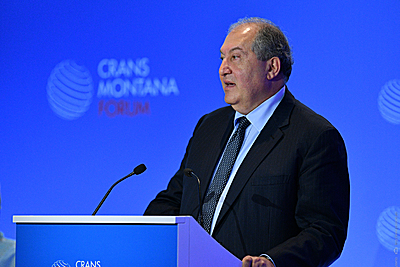 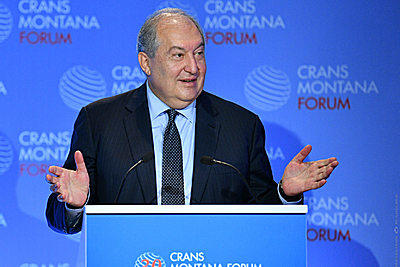 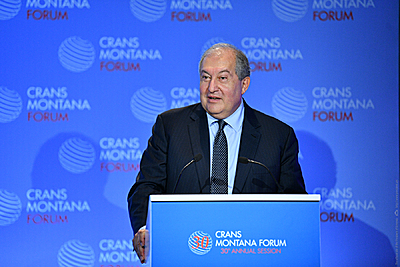 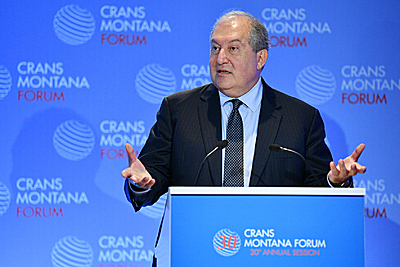 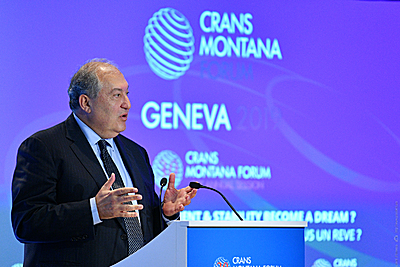 President Armen Sarkissian in Geneva, Switzerland participated at the official opening of the 30th session of the annual Crans Montana Forum.

Crans Montana Forum is a prestigious platform which is cooperating with the UN, UNESCO, EU, NATO, Council of Europe and other international organizations.
The main topics of the 30th session of the Crans Montana Forum are peace, current challenges to development and stability, and encouragement of the efficient cooperation to thwart them. Just like every year, the session is attended by the heads of state and government, ministers, MPs, representatives of international organizations, diplomats, entrepreneurs, and experts from over 100 countries.

Meetings held in the framework of the Forum present the entrepreneurs and state representatives with the opportunity to network and strengthen partnership relations. In his opening remarks, the founder and Honorary Chairman of the Crans Montana Forum Jean-Paul Carteron addressed the President of Armenia: “It’s a great honor to have you here, because you are one of those who know what to do to improve the situation in the world and to take efficient steps for the peoples.”

In his speech, President Armen Sarkissian thanked for the invitation to participate at the prestigious Forum and noted that for the last 30 years it has been gathering under one roof prominent state figures, analysts, leaders, and entrepreneurs to discuss the world’s current and future challenges. “Thirty short years but also a huge period of time,” President Sarkissian said. “In these thirty years, the world has undergone great changes: Empires collapsed, new countries appeared. In these 30 years, we have probably lived one hundred years’ life. Thus, my congratulations for the Forum’s achievement – 30 year of practical policies, and I hope that one day this wonderful Forum will be held in Armenia.” Speaking about the key issue of the Forum – whether peace, development, and stability are becoming just a dream – President Sarkissian said that the answer is no. “For peace, development and security to be a reality and not a dream, we all need to become part of them, need to believe that every day we are moving towards peace, that development is irreversible, stability is attainable. I believe, we ourselves need to change first to come back to peace, development and stability; we need to understand one simple thing – the world is different. It is different from what it was 30 or 50 years ago. It is different not only because the Berlin wall was torn down, the Gold War ended, or there were financial crises or a number of significant events. It is different because we entered the 21st century. Some would call it the fourth industrial revolution but I would call it the era of a rapid evolution when technological revolutions are taking place every day, every month, every year. Our life will be changing very fast.”

President Sarkissian noted that in fact we were entering a new world where technologies were changing and developing rapidly. “We are standing at the gateway of a new world where 7 billion people have 55 billion connections. Each of us has on average 7-9 internet connections. Tomorrow it might become 10, then 15… This is a world where entertainment occupies a greater space. The rules of the game have changed. We need to think how to live in a new world because many of the fundamental ideas entertained by us through the years and which pertain to human rights, democracy should be treated as entertainment and not because they are less valuable but because of the changes that have taken place. We live in a world where democracy is used not only during elections but every day through Facebook and Twitter. And societies respond to it every day.”

According to Armen Sarkissian, the world, which we are entering, will be totally different, thus we need to change ourselves, we need to clarify our human values in the 21st century. “When we have done that, we won’t be afraid of the everyday changes, of the unpredictable world because it will allow to understand what to anticipate and how to act in the new world,” the President of Armenia said and added, “My message is the following: Let’s accept that the world is different now. It will be different every day. The value, which will be important for us, is the adaptability to the changes. We need to change not every decade or centennial but every day – that’s the command of the world.

Not only as the President of Armenia but also as an Armenian and just a human being, I am confident that small, too, can be successful especially in the new world where the major companies are not those engaged in natural resources but Apple, Facebook and many IT companies. We are entering an era where a startup idea can be even more powerful than anything else.

We are a small country but a global nation. We are ready for the 21st century because we have a global network. Armenia is a country of hardworking people, people which can bring new technologies to our country. I am confident that the 21st century can be the time not only of superpowers but also of successful small states. Countries like Armenia have to have a mission. It unites the nation. One of my country’s mission is to become a world leader in the area of artificial intelligence and technologies. Small can be beautiful. Armenia is a beautiful country; it can also be successful. I am optimistic.”