President Sarkissian concluded his visit to Syunik marz: To rise straight up, you need to think straight 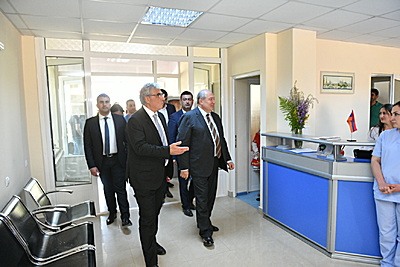 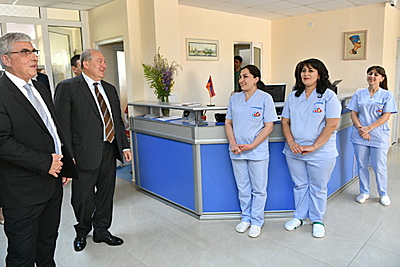 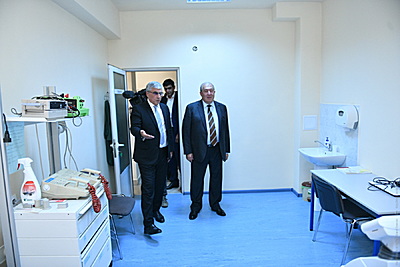 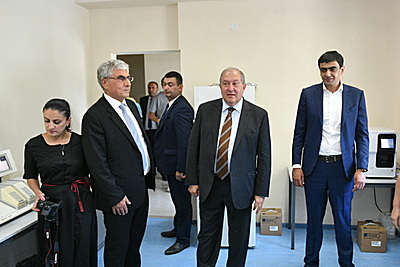 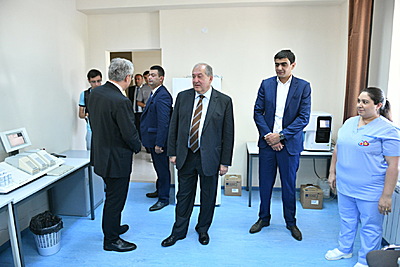 At the conclusion of his working visit to Syunik marz, President Armen Sarkissian visited the Armenian-French Cardio-Vascular Center in Goris.

This center, which has high-class specialists and is equipped with modern devises, serves patients with cardio-vascular issues not only of Syunik but also of Artsakh, and Vayots Dzor marz.

The medical center was established in 2013 by the France-Armenia Health Action Association with the assistance of the administration of French Bouches-du-Rhône region. Up to this moment, because of the works of the center more than 2000 lives have been saved.

President Sarkissian thanked Avetis Matikian, who initiated the construction of the center, and the medical staff for their dedicated work. He hailed the role of the center in preserving the health of the regional population.

At the conclusion of his visit to Syunik marz, President Sarkissian responded to the questions of the journalists and noted that he was happy to spend two days at the South of our Fatherland - a region which has history, values to boast about, a great potential even though a major part of that potential has not been realized yet.

Speaking about his visit to the Meghri free economic zone, President Sarkissian expressed hope that it would become operational pretty soon. “Interest toward that zone is great. It has applicable importance not only for Syunik but for the entire country. Multiple companies are interested in using Armenia to enter the Iranian market.”

He noted that in some cases he could assist personally, be helpful, for instance in helping small enterprises of Kapan in finding new markets.

Speaking about his impressions, President Sarkissian said that it is important for the residents to view their town, their community as their home. Speaking about his visit to Zangezur copper and molybdenum plant, Armen Sarkissian said that it plays a very important role, especially for the people of Kapan and Qajaran. “They don’t care who the owner is. They believe that the plant is theirs, the town is theirs, and it is very important. Their fathers worked there, and their sons will work there. It is very important that the plant is also carrying out social programs.”

Similar unity, according to the President, could be observed during the Mulberry festival in Qarahunj. “I was delighted by the number of people and the atmosphere there,” Armen Sarkissian said. “People are proud of their history. The sense of being one family, which they possess, is very beautiful and impressive. It was pleasing that visitors came not only from the nearby villages but also from Goris and Yerevan. My request to you, don’t get comfortable with mulberry only. You should be able to gather us all on any such occasion and get happy because we are together. Thus, I appeal to you all – our Fatherland is very beautiful, come and discover it.”

The President viewed the comprehension of the state interest and state thinking as the base of development. “If there is no state interest – constant, long-lasting – for the resolution of the problem, your actions will not be right no matter what, one day all will collapse. A structure, or organization - it should have a strong and proper foundation and rise upward. To rise straight up, you need to think straight, having the state and national interest at heart.”