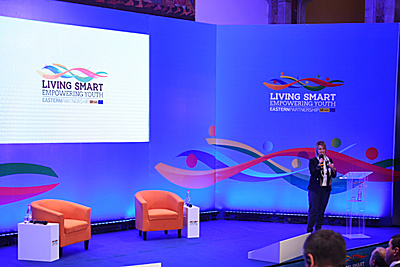 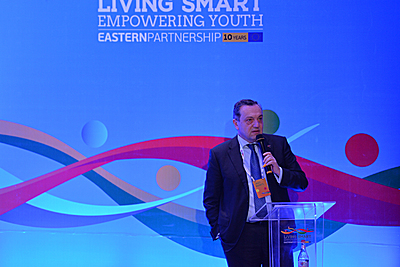 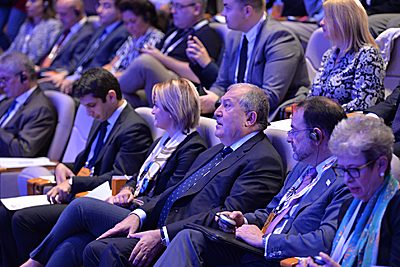 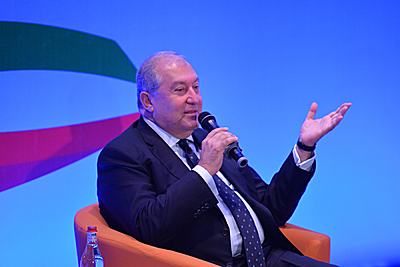 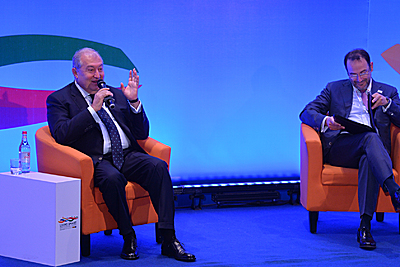 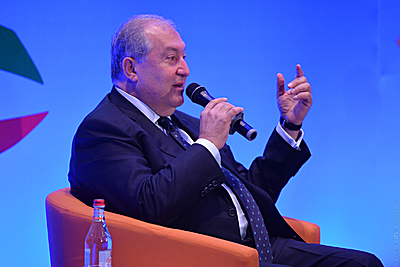 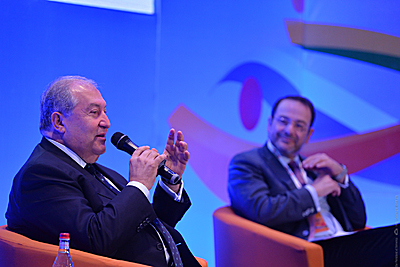 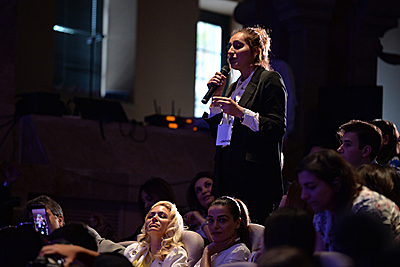 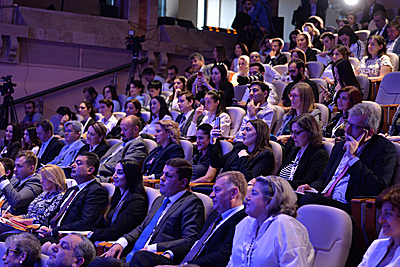 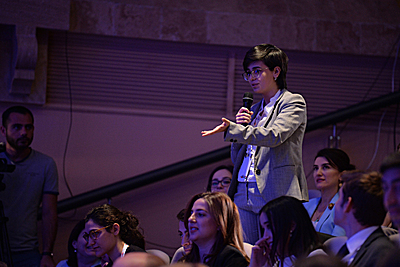 President Armen Sarkissian participated today at the conference dedicated to the 10th anniversary of the EU Eastern Partnership program and named Living Smart: Empowering Youth. The conference took place at the Matenadaran - M. Mashtots Scientific Institute of Ancient Manuscripts. The Conference is organized through the joint efforts of the Ministry of Foreign Affairs, Ministry of Education, Science, Culture and Sports, and Ministry of High-Tech Industry.

The Conference was attended also by the officials of the EU member states dealing with education, youth and innovation issues, participants of the Europe’s Young Ambassadors program. In his remarks, President Sarkissian first thanked for organizing the Conference in Armenia. “When I represent our country abroad, sometimes I think I am the president of a startup. Armenia is one big startup, Armenia has rich, millennia-long history but today Armenia is a startup. Many think that we have much greater potential than we use, and that’s the description of a startup. Armenia is a startup and its opportunities are plenty. I am confident that we will be successful,” the President noted.

Speaking of the title of the Conference - Living Smart - Armen Sarkissian noted that in the 21st century living smart is not only mastering the digital art but combining everything. Addressing the young participants of the conference, President urged them, “Living smart is a much wider concept. I urge the younger generation to live smart, use education properly, to learn as much as possible. Get the ability to live physically smart, train, pay attention to your diet but remain young like Charles Aznavour in his 94 years whose last concert took place days before his death. Live smart like Kirk Kirkorian, who sealed his last business deal two days before his death. Live as young people because being young has nothing to do with the age.”

According to the President, to live smart as a state and as a nation is a combination of all capabilities – of the young and all those who feel young. He stressed the importance of cooperation of different generations and noted, “I believe, that the future belongs to the cooperation of different generations, particularly those who think, live, and act as young people. I encourage the entire nation to participate to this process. Speaking of education, it is always said that first there should be a teacher who will teach. There is no school with pupils only, there should be teachers as well. These schools exist like communities, where people understand each other. If you don’t understand that, you cannot teach the next generation which is a bit different from yours.” President Sarkissian noted that the EU can benefit in many ways from working with the countries like Armenia.

“Our nation believes in its future, is able to make changes, changes which may surprise others. Our nation is full of hope and enthusiasm, believes in the future, thus I believe that cooperation with us will help also Europe to stay young, to learn from us, from our experience. Time is ever moving, there is no last stop. We view Europe as a partner, together with whom we can learn, create ideas,” President Sarkissian added and noted that demands are changing in the digital world too, and Europe itself ought to learn much about digital world from the others.

“I am ready to continue to support you, Europe’s Young Ambassadors to make the EU younger, to have values of the 21st century. The world is changing. Nowadays, people’s voice is heard every moment. We need to live smart in every area, and I am ready to assist in the cooperation with the partners, to encourage young people to become active participants in the development of this startup-state.” Afterwards, in the Q&A format, President Sarkissian conversed with the participants of the meeting.

Responding to the question on the challenges, the President noted that as a rule, startups start with few people, who have ideas in which they believe. But it is not enough to have ideas to make a small startup a success; it is also necessary to have a vision. He noted education among important factors, which means training of the next generation as well as the creation of a corresponding environment.

“It is impossible to have a startup without a proper milieu. To develop digital systems in Armenia, it is necessary to bring major companies here to conduct research. Their presence is the right environment for the startups. It is very important that not only the world learns about us, but also we learn about the world.” Armen Sarkissian informed that the Presidential Office has started an initiative, which is called ATOM, and in the framework of which it is envisaged to bring major companies, such as IBM, Thalles, Dassault, to Armenia to conduct research works. It will help the younger generation to live in a proper environment where they can learn from major companies.

“We need to also integrate our country. This country is not only Yerevan, there are talented people also beyond it. One of the examples is COAF in Lori,” the President underscored. “I am confident that there will be many challenges in the future but let’s not forget that each challenge is also an opportunity. You can build your life and success on challenges and opportunities, and it will make our country stronger.”