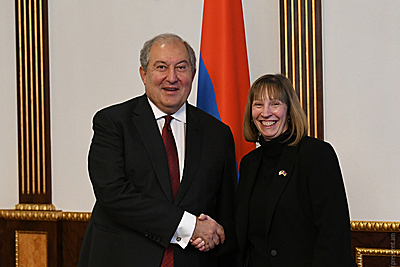 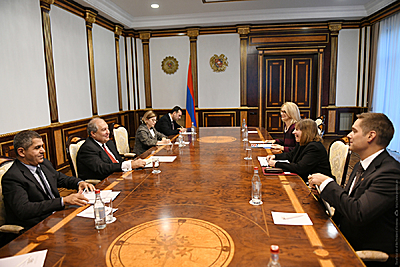 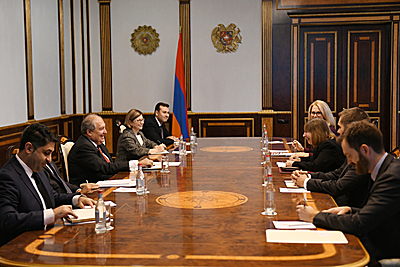 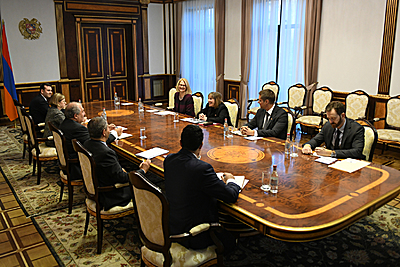 President Armen Sarkissian received today the US Ambassador to Armenia Lynne Tracy. Present at the meeting were also the Deputy Chief of Mission Christopher Smith, Director of USAID Armenia Office Deborah Grizer, and the Embassy’s Counsellor of the Political and Economic section Ryan Campbell.

The President welcomed the guests and underscored the high level of the Armenian-American cooperation in various areas. The President of Armenia stressed the importance of a continuous development of the bilateral relations and hailed the assistance provided by the Government of the United States to Armenia. He noted that each, even the smallest step, could yield great results.

Ambassador Tracy noted that the United States is interested in developing as much as possible the efficient cooperation with Armenia. She stressed that there exist multiple opportunities for positive changes. She informed that in the framework of the US-Armenia cooperation programs, the US assistance to Armenia in 2019 was increased by 40 percent. It was noted that the means provided by the American side would be directed mainly toward the development of democracy in Armenia, fight against corruption, reforms in the judicial system, protection of human rights, strengthening of the civil society. Presented were also the main programs in the framework of the initiatives aimed at the economic development.

The interlocutors exchanged views on the new opportunities for cooperation. In this context, President Sarkissian presented events to be held next year in the framework of Presidential initiatives, among them the Armenian Summit of Minds, STARMUS 6th international festival and stressed the importance of cooperation in this framework.

The President of Armenia spoke also of the ATOM Presidential initiative which is aimed at the development of science and modern technologies in Armenia and in particular at bringing to Armenia major technological companies which will make our country one of the world’s leading centers of artificial intelligence and mathematical modeling. He proposed to look into the opportunities of cooperation in the framework of this project as well.