Armenia has a great future in technology: President Sarkissian received the winner of the State Prize of Armenia for Global Contribution to Information Technologies Takeo Kanade 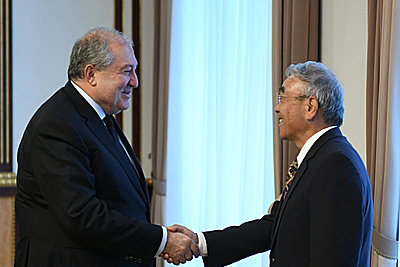 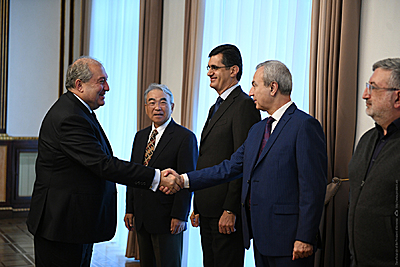 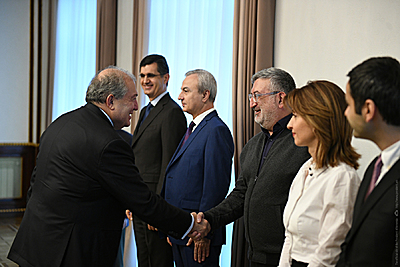 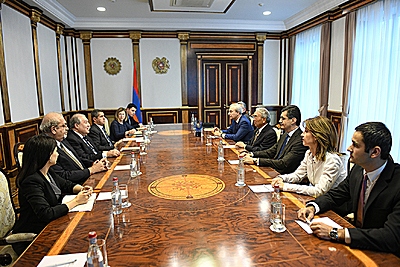 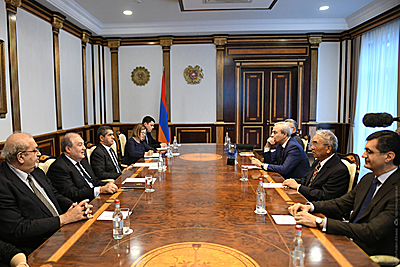 President Armen Sarkissian received today the winner of the 2019 State Prize of the Republic of Armenia for Global Contribution to Information Technologies (IT), Japanese scientist, Professor of Carnegie Melon University, the author of Origami World theory, creator of “virtual reality” concept Takeo Kanade.

The President congratulated the Japanese scientist and said in particular, “Any innovation, even the greatest, cannot solve problems, it can answer only one of hundred questions. Your work of a person who has done so much for the technological development, creates new questions: what comes next? As you have noted, some of these questions at the moment are more philosophical but as soon as tomorrow they will become practical questions.

I am glad that now Armenia is going through a period of becoming a technological hub. I am glad because it is not spearheaded directly by the government or other institutions but by multiple enthusiasts.

The Presidential institute, to the utmost of its abilities, will support technological development. We have our own initiative named ATOM. We have invited numerous major companies and I believe those companies can engage here in the development of artificial intelligence, mathematical modeling, and other areas.”

President Sarkissian said that during his working visit to Japan he met with the leadership of the Japanese Mitsubishi Heavy Industries company and discussed opportunities of implementing joint programs in Armenia. “We had also an interesting meeting with Prime Minister Abe,” President Sarkissian noted. “We discussed what we can do together and singled out new technologies; Armenia and Japan can cooperate in this area.”
Takeo Kanade thanked for the high assessment of his work and noted that he was impressed with Armenia and Armenians. The world-famous scientist said that he saw a great future for high technologies in Armenia. He noted that in Armenia, just like in Japan, parents want their children to receive good education.

President Armen Sarkissian agreed with Takeo Kanade and said, “Armenians everywhere attach great importance to education, they want their children to a have a good live, while a good life requires a good education.”

The President of Armenia and Japanese scientist spoke about opportunities of cooperation in the area of modern technologies, scientific programs, and probable exchange of students.

President Sarkissian invited Takeo Kanade to participate at the Armenian Summit of Minds to be held in Armenia next year, whose main discussions will pertain to geopolitical realities of the 21st century, new technologies, and impact of artificial intelligence.