President Sarkissian met with the members of the “Gyumri Is My Home” youth initiative: Never be scared to work with the people who are smarter and more experienced than you 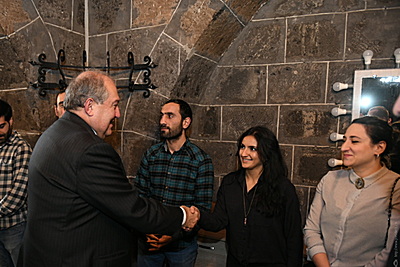 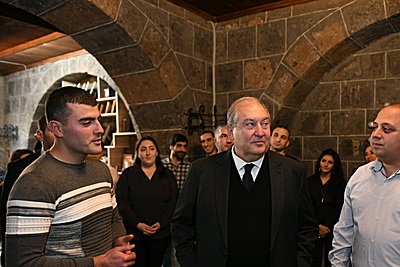 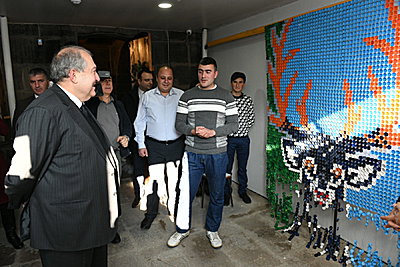 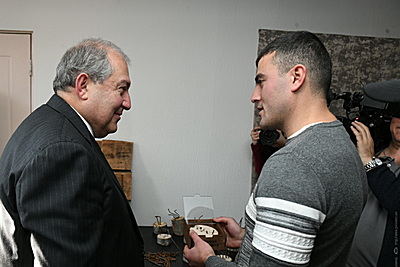 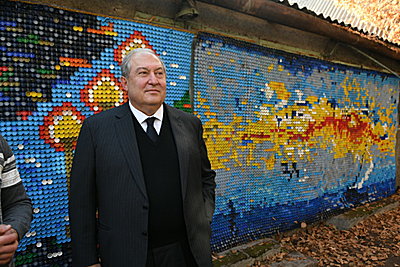 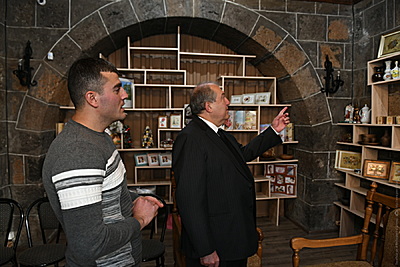 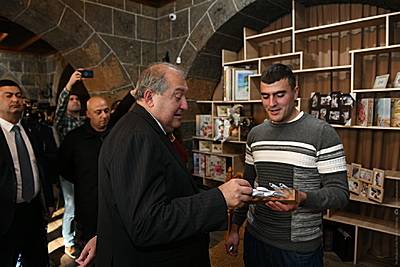 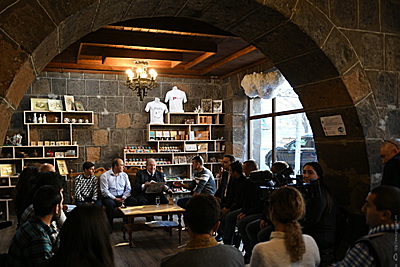 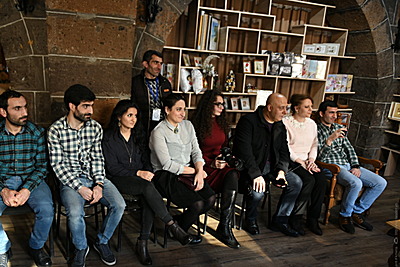 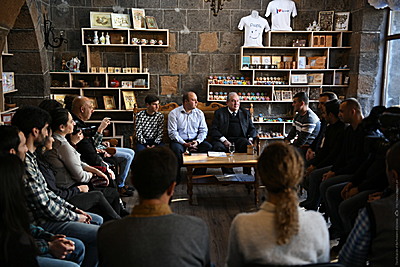 In the framework of his working visit to Gyumri, President Armen Sarkissian visited the workshop of the “Gyumri Is My Home” youth initiative.

The young people told about their various projects, such as a skating ring in Gyumri, creation of mosaics on different themes, aphorisms on the streets of Gyumri, ecological actions, tree planting, beautification of the city, etc. The “Gyumri Is My Home” youth initiative has 300 members and was launched in 2012. The main objective of the initiative is to disclose and solve problems existing in Shirak marz, particularly in the social, tourism, culture, and sport areas. Accompanied by the founders of the initiative, President Sarkissian familiarized with the unique works of the young people, observed their yet another gift to the city – a mosaic made of corks. Later, the President met with the members of the initiative and spoke of the role of the young people in the reviving Gyumri.

“Hearing about you from different places, I thought that we could become companions and do something together,” President Sarkissian said and added, “You are our country, the future of our country. You are the people who do creative job and it is the most important thing. There is a great philosophy in that. I would be glad if there is an opportunity to work together.”

The President spoke in particular about the native of Gyumri, philosopher, musician, and a great thinker Gyurjiev and recalled engaging memories, ”In 1984 I was working at the United Kingdom when on the eve of the New Year, in December, the Gyurjiev Association invited me to a meeting. I thought there would be five or six people, while the meeting took place in a grand hall where nearly two thousand people gathered. On the next day too, around two thousand appeared and, mind you, high-level persons, state figures, businessmen, people from arts, etc.

After visiting Armenia, the association was conducting meetings twice or three times a month. They printed the historical map of Armenia and handed it out. It seemed that there was some kind of connections with the Scots, English, Germans and others. But they were gathering to paint old historical maps and present them as gifts. I have two of them, and one in the Embassy of Armenia (in London), hanging on the wall. Gyurjiev is an asset and it would be wrong not to use it.” The President expressed desire to reconstruct Gyurjiev’s home in Gyumri. “Gyurjiev’s home doesn’t exist but I have an idea to reconstruct it or build a new one.”

The conversation of the President with the young people continued over the topic of values. President Sarkissian stressed as extremely important the ability to appreciate national values. “We often err and believe that whatever is far away from us, abroad, is more important and has a greater value. But your own is the most precious,” the President said. “Everything that was created in the course of centuries and is precious, I believe is an ordinary thing. We shouldn’t lose that asset. We have multiple traditions which shouldn’t be observed artificially, shouldn’t be turned into something vulgar or indecent. On the contrary, interacting with others, we need to clean them and present in a beautiful way.

What I mean is the following: there are so many values around you. You find a nail on the street and try to use it to make something interesting. The same is true with our cultural values. You live in Gyumri; here on the streets, in the homes there are multiple “small nails” which need to be found and cleaned of rust. On the entire territory of Armenia in general there are vast values which should be found, each “nail” should be picked up, polished, and something from it should be made which will make foreigners wonder. This is not arrogance. We are what we are today. The history of Tigran the Great must be known but boasting about it will get us nowhere. The past and history do not mean anything if one is not able to refine it, to give value.”

Stressing the importance of a teamwork, President Sarkissian said, “The best leader and organizer is the person who can get around him people who are able to carry on with the work without him. My advice to each of you: even if you’re doing something small, create a team, and give others the opportunity to speak out. Never be scared to work with the people who are smarter and more experienced than you. It will only prove that you are strong. Only weak people are anxious that someone could be smarter or more experienced than they are. Great success always comes with a team.”