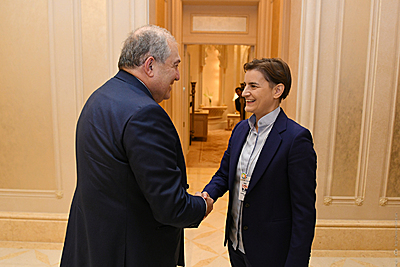 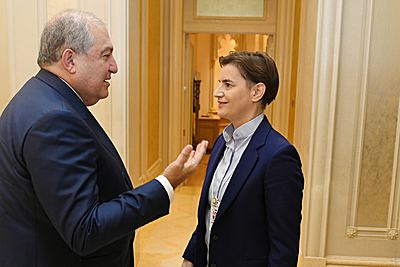 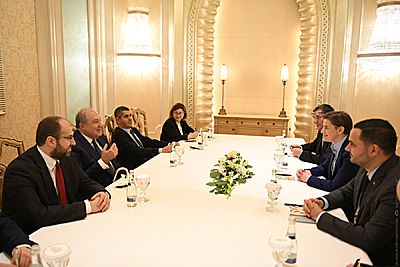 President Armen Sarkissian, who is in the United Arab Emirates on a working visit, met with the Prime Minister of Serbia Ana Brnabić who is participating at the prestigious international Abu Dhabi Sustainability forum.

Stressing the recent efficient meetings and discussions, the interlocutors spoke of the process of implementation of the previously reached agreements. They noted with satisfaction that the Armenian-Serbian relations were progressing gradually. Citizens of Armenia have already been granted a free visa entry to Serbia. The agreement on this was reached during President Sarkissian’s official visit to Serbia.

The Prime Minister of Serbia informed that an embassy of the Republic of Serbia in Armenia would open in the end of February. It was noted that those were important steps aimed at the strengthening of the relations between the two countries.

The sides also praised another agreement, about holding the Armenian Seaside Startup Summit forum along with the annual EXIT music festival being held in the Serbian city of Novi Sad.

The President of Armenia and Prime Minister of Serbia discussed promising areas of bilateral cooperation. Noting that both in Armenia and in Serbia problems of ecology and green technologies were very important, President Sarkissian said that two countries could cooperate successfully in this area too. The parties noted great potential of a mutually beneficial cooperation also in the areas of technologies, IT, and artificial intelligence. In this context, they spoke about opportunities of cooperation in the framework of the ATOM (Advanced Tomorrow) presidential initiative.