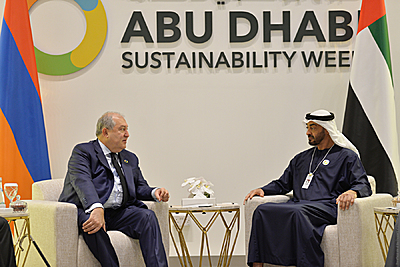 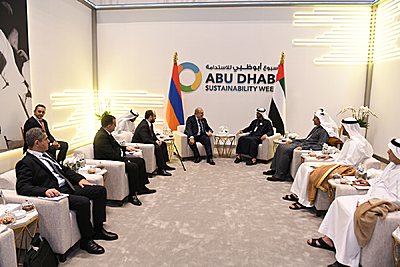 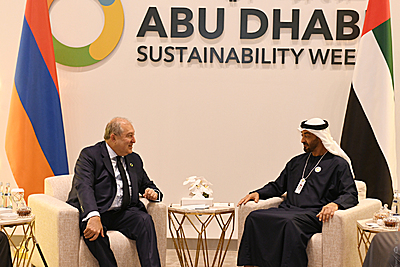 President Armen Sarkissian, who is in the United Arab Emirates on a working visit, met with the Crown Prince of UAE, Deputy Supreme Commander Sheikh Mohammed bin Zayed Al Nahyan.

President Sarkissian thanked Sheikh Mohammed bin Zayed Al Nahyan for the invitation to participate at the Abu Dhabi Sustainability Week forum and noted, “Warm relations between our countries and peoples are very precious to us. We are ready to further develop and expand them.”

President Armen Sarkissian stressed the importance of the agreement on mutual development signed during his last December visit to the United Arab Emirates between the leader in production of renewable energy Masdar company and the Armenian National Interests Fund. The agreement envisages development and implementation of solar energy production projects in Armenia totaling 400 MW which will attract nearly 300 million USD investments to Armenia.

Noting that Armenia has beautiful nature, the President said that this project, which is an important step toward the diversification of Armenia’s energy system, would make Armenia even greener.

President Armen Sarkissian and Crown Prince Sheikh Mohammed bin Zayed Al Nahyan discussed the entire range of Armenia-UAE cooperation. Among promising areas of cooperation they noted innovations, IT and high technologies. In this context President Sarkissian presented the ATOM (Advanced Tomorrow) presidential initiative aimed at the development of science and technologies and noted that this multi-component project envisages in particular creation first in Armenia Disneyland for kids based on artificial intelligence. It also aspires to bring to Armenia major international IT and high technology companies, turning our country into a leading center for artificial intelligence and mathematical modeling. “We will be glad to cooperate in the framework of this project also with the companies from the Emirates,” the President of Armenia underscored.

The interlocutors mentioned also great potential for cooperation in the areas of food security and agriculture, exchanged views on the issues related to nuclear energy, nuclear fuel, and management of nuclear waste.

Tourism was also mentioned as an area of mutual interest. From the viewpoint of developing tourism and business ties, President Sarkissian stressed the importance of establishing a direct air link between Abu Dhabi and Yerevan. Sheikh Mohammed bin Zayed Al Nahyan instructed the head of the relevant structure to discuss the issue and provide a practical solution.

The extended meeting with the participation of the delegations was followed by a private meeting between the President of Armenia Armen Sarkissian and the Crown Prince of UAE, Deputy Supreme Commander Sheikh Mohammed bin Zayed Al Nahyan.