President Armen Sarkissian met with the President of Indonesia: stressed were the importance of cooperation in the areas of information technologies, creative education, and innovations 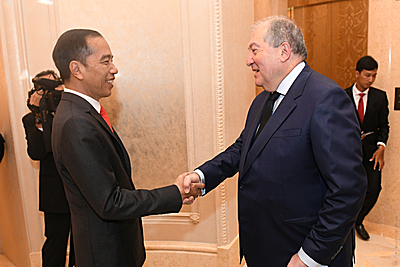 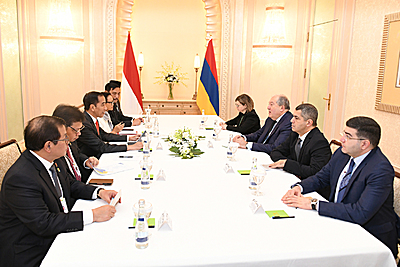 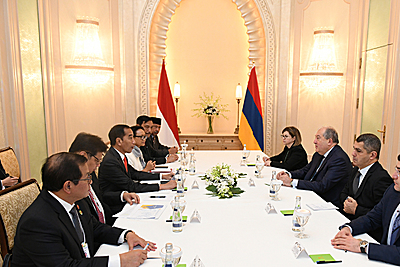 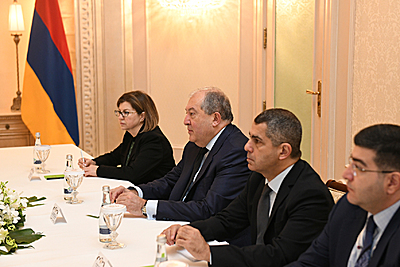 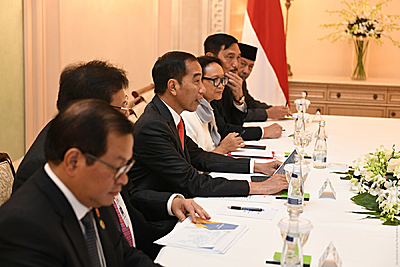 President Armen Sarkissian, who is the United Arab Emirates on a working visit, met with the President of Indonesia Joko Widodo.

President of Indonesia highly valued the meeting with the President of Armenia and spoke about the Armenian-Indonesia historical ties and noted in particular the Sargis family.

Stressing the importance of carrying on with the traditions, President Sarkissian said that his objective is to encourage the expansion of cooperation of the two countries, to use fully existing potential and opportunities. Noting that Armenians are a global and closely interrelated nation, Armen Sarkissian said that thanks to a global distribution of the Armenians and Armenian business, potential for cooperation increases manifold.

The Presidents of the two countries stressed in particular the expansion of cooperation in the areas of IT, creative education, and innovations as well as the exchange of experience. In this context, President Sarkissian spoke about the ATOM (Advanced Tomorrow) presidential initiative aimed at the development of science and education and noted that this multifaceted project envisages in particular the creation of the Museum of Future for kids and the first in Armenia Disneyland based on artificial intelligence. The program aims also at bringing to Armenia representatives of the information and high technology international companies, making our country a leading center of artificial intelligence, management of large volumes of information and mathematical modeling. The sides spoke in this context about the opportunities of cooperation in this framework with Indonesian companies.

The two Presidents exchanged also views on the prospects of cooperation in the framework of the Eurasian Economic Union. The President of Indonesia said that his country was anticipating Armenia’s assistance in signing an agreement with the EAEU on the establishment of a free trade zone. President Sarkissian underscored that the bigger and more dynamic the Organization is, the more attractive it would be for the expansion of cooperation with its member states. He also spoke about Armenia’s competitive advantages which create great opportunities for the investors from Indonesia in entering new markets.

At the meeting stressed was the importance of facilitating reciprocal visits and contacts of the citizens of the two countries, boosting of tourism, and noted was Armenia’s being an interesting, culturally and historically attractive touristic destination.

They also spoke about opportunities of cooperation in the areas of agriculture and food security. President Sarkissian said that Armenia can export high-quality fruits and vegetables, hydroponic produce and goods which would be competitive in Indonesia.