President Armen Sarkissian as a keynote speaker participated at the “Balancing Domestic and Global Inequality” panel: this will be not businessmen’s but young people’s world 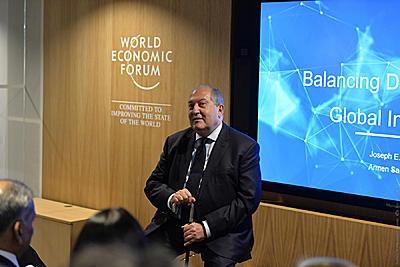 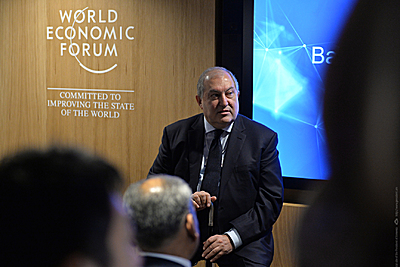 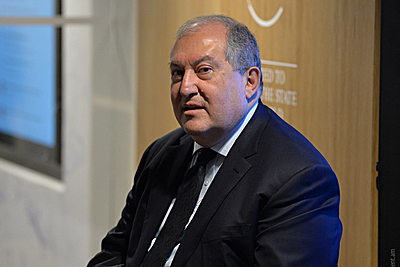 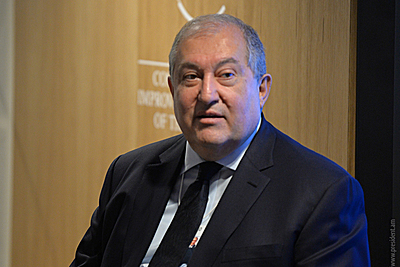 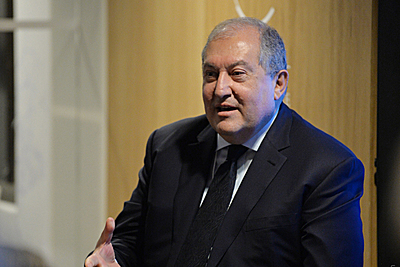 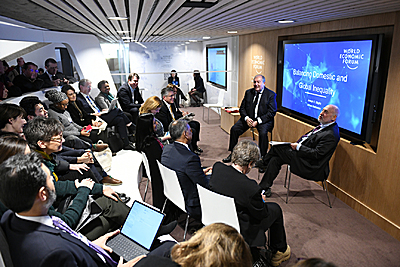 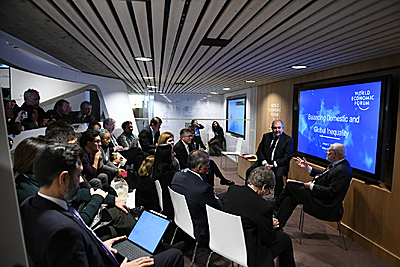 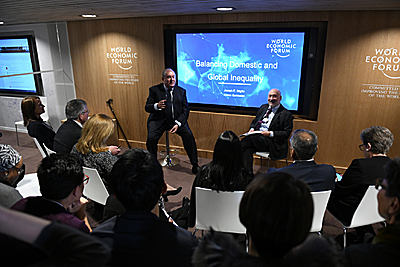 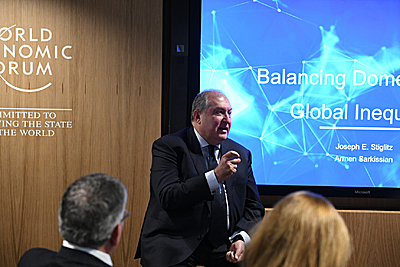 President Armen Sarkissian in the framework of the World Economic Forum in Davos as a keynote speaker participated at the “Balancing Domestic and Global Inequality” panel. President Sarkissian participated at the panel together with another keynote speaker - the Nobel Prize winner in Economics, professor at the Columbia University Joseph Stiglitz. He was the Chairman of President Bill Clinton’s Economic Advisers Board, Senior Vice President of the World Bank and Chief Economist and authored a number of researches. His latest book istitled “The Price of Inequality: How Today’s Divided Society Endangers Our Future.”

Considering the fact that the 2020 report on global risks mentiones inequality as the main risk factor, it was debated how decision-makers could improve the balance between the domestic political priorities and global economic situation.

Before discussions started, President Armen Sarkissian thanked professor Stiglitz for the role he has had in his life and clarified that in 1996, while the Prime Minister of Armenia, he had had disagreements on poverty reduction with representatives of the World Bank. “For me, as prime minister, the means of overcoming poverty was development,” President Sarkissian told. “We reached a common conclusion with the President of the World Bank to make Armenia not a country fighting poverty but make it a developing country. In this “fight” I was inspired by professor Stiglitz’s article on globalization.

Speaking of global risks, President Sarkissian noted their quantum nature and the base of quantum politics. “I have presented that theory in a 600-page book which will be published soon,” Armen Sarkissian said. “In order to understand how far your country can go, it is necessary to think about the current situation in the world. I was thinking about it even before becoming president. As a citizen, I am amazed by similarities. To understand it, it would be necessary to travel 100 years back when we were dealing with natural sciences and physics world, when the scholars were able to analyze classical phenomena up until the point when they collided with the processes which were inexplicable. It caused havoc. At that time, it became necessary to change the perception of the phenomena. Geniuses like Albert Einstein, Werner Heisenberg, Richard Feynman didn’t create anything, they changed the philosophy of comprehending physics. In the greatest discoveries happening around us, each of us has his small part. The current generation is living in two worlds – material and virtual. We are elementary particles.

Another important fact is the population growth. When I study nature, I come to realize that it is not classical, it is quantum. Bodies are ruled by quantum laws. I understood that with time we become more and more quantum that we are living in a society which is quite different from the previous.

Democracy is changing too, since in a normal democratic country one votes for parliament, or president for the next five years, then waits for results, polls, etc. Nowadays, you are voting daily on the Facebook page. Today we live in a totally different world which is of quantum nature and becomes more complex. There are no regulations not only in a sense that we don’t understand what’s going on, but there are also no regulations in a social dimension. Thus, welcome to a new world, which, just like nature, is not classical but quantum. Personally, I am very excited about it because we have scientists who need to understand how quantum policies are working. It’s a marvelous task and its solution will be an achievement.

Many of developed countries of the world have debts which must be paid off. The bigger the debt, the more problems it creates. How to solve that problem? One can do refinancing, negotiate, boost the economy, ensure economic growth but nevertheless there are certain restricting obligations. But let’s view this problem from another angle.

The greatest issue everyone is talking about today is related to environment. Each of us is interconnected not only through the debt we have inherited from IMF and World Bank but also by bilateral debts. Let’s imagine there is a big country which is concerned with climate change and is ready to invest 1 billion USD in the improvement of climate change: we plant trees, make production cleaner, and so. Let’s imagine that there is a smaller country which has five hundred million USD debt and has to service it.

Imagine also that there are two smart leaders who have agreed to combine their efforts and have convinced the international community that the smaller countries should spend part of that debt on making their countries greener planting thousands, millions of trees and will give that loan to a larger country which will be able to confirm that they have invested hundreds of millions of dollars into “green bonds.” The idea is how to make planet Earth greener, with less CO2, or how to get rid of debts in favor of climate.

As a result, a small country, which makes a very favorable for the entire world move, will have another chance and borrow 500 million dollars.

We are living in an unpredictable and volatile world. It’s been my conviction that uncertainly always breeds opportunities. Opportunities appear for small country because in the technological sense, we all start from the same point. Armenia is a small country which has multiple scholars, physicists, mathematicians, great educational systems in the area of programming. Everything will change because in the future plants will not be needed for machine building. Five, 10, or 20 years from now, when you visit a trade center, your car will be ready before you have even bought some food for your kid. Your car will have three thousand components, it will be electrical, assembled for you by two robots. This is the reality.

Production processes at the manufacturing enterprises will change dramatically. Today, we are trying to find big markets where the labor is cheaper, while in the future large companies’ advantage will be their know-how. It is very important because the future of the world will be defined mainly by startups.

But how I am able to make an innovation when the industrial logic dictates that you need to go to university, become an engineer, then a senior engineer, and ultimately vice-president. This creates another problem because Armenia is a land-locked country but I am thinking of building a harbor in Armenia, make Armenia a major international “harbor” in the global ocean of information. At this point we come across other problems, risks connected to data, regulations, etc. But if we take the route of creating a startup, the idea becomes the most powerful tool. What’s the idea? Can you sell it, will it have some value, will we have idea marketplace in the future, and will we be able to regulate them?
We are entering a new world, and I am not afraid of that fact. I believe the speed we are moving with will result in the fourth industrial revolution to be the last one because it will be swift. The fourth, fifth, and sixth will be our evolution, revolution because we will be living in a new world and need to think outside the box.

All areas should be developed in parallel, tourism, culture should be developed, everything should be produced and sold. But all this should be based on new technologies, artificial intelligence. There are good examples of that in Africa too: look at Rwanda where e-governance has brought about great changes.
I am a great optimist. This world is going to be totally different; it will be not businessmen’s but young people’s world.”