President Armen Sarkissian raised at Knesset the issue of recognition of the Armenian Genocide: there are many tragic pages in the history of the Armenian and Jewish peoples and joint steps must be taken to prevent human catastrophes from happening again 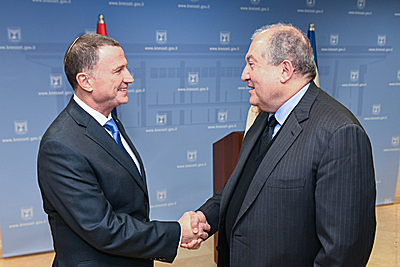 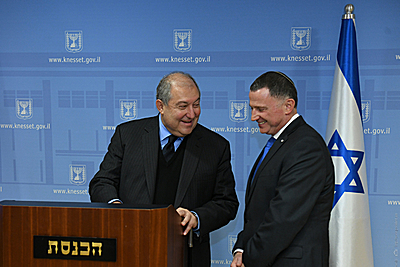 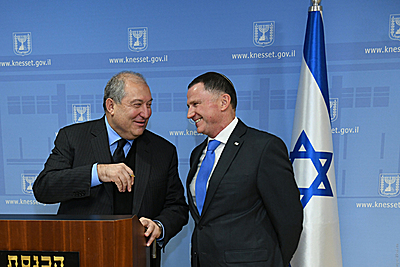 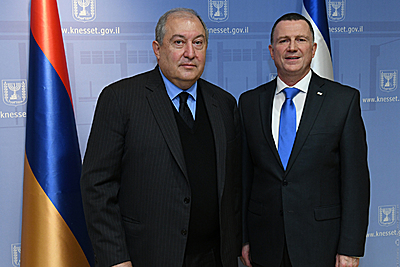 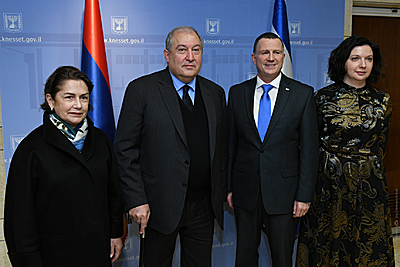 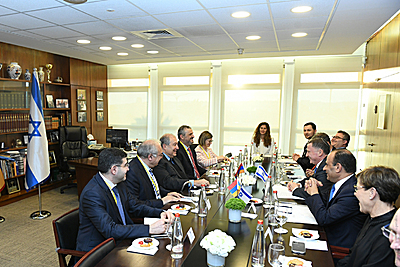 President Armen Sarkissian, who is in the State of Israel on a working visit, and Mrs. Nouneh Sarkissian today visited the Israeli Parliament – Knesset where they were hosted by the Speaker of Knesset Yuli Edelstein and Mrs. Irina Nevzlin.

The Speaker of Knesset welcomed the President of Armenia and noted, “We are greatly honored to receive you in our country. We are happy to see you here even though your visit is taking place in the framework of the event which is not that joyful.” Yuli Edelstein expressed confidence that the visit of President Sarkissian as well as Armenia’s decision to open an embassy in Israel would become important cornerstones for the advancement of the bilateral relations. “I believe this visit will bring about very positive changes in our relations. Potential for our cooperation is much bigger then we are using currently,” the Speaker of the Israeli Knesset said.

President Sarkissian noted that he had stood at the origins of the establishment of diplomatic relations with Israel. “To be honest, I wanted for years to come back to Israel because I have memories related to this country,” the President of Armenia said and stressed the importance of adapting Israeli experience in different areas including high-tech and innovation as well as exchange of experience.

Speaking of analogous pages in history, President Sarkissian said that similarities in the destinies of the two peoples were striking and they suggest that it is necessary to think of the future. “We can create that future together, as two states and two nations. Armenia is a small country but a global nation, the same is true for Israel. I am here to also identify areas of cooperation. Armenia attaches importance to the development of many areas – science, education, security, agriculture, modern technologies. And as the President, I have initiated making Armenia a new technological hub since we have a number of advantages in achieving that. There are prominent physics in our country, mathematicians, and we have good educational programs in the area of software engineering.”

President Sarkissian said that there were many tragic pages in the history of the Armenian and Jewish peoples and it is necessary to take joint steps to prevent such human tragedies from happening again. The President of Armenia raised the issue of recognition by Knesset of the Armenian Genocide and underscored that recognition and condemnation of that shameful page in the human history must not be conditioned by the day’s political interests and realities. “Recognition of the Armenian Genocide is first of all a moral responsibility and a tribute to the memory of innocent victims; at the same time, it would be an important contribution to the international efforts on prevention of genocides and crimes against humanity,” the President of Armenian underscored.

At the conclusion of the visit, President Armen Sarkissian made in inscription in the Book of Honorary Guests. Later, President Sarkissian and Mrs. Nouneh Sarkissian toured the premise of the Israeli parliament.