President Armen Sarkissian met with the Governor General of Canada Julie Payette: future of the Armenian-Canadian relations has great potential 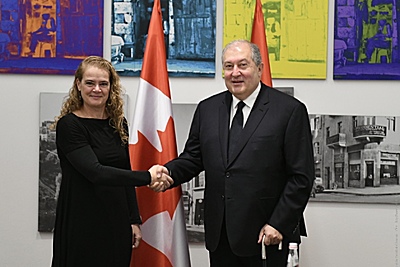 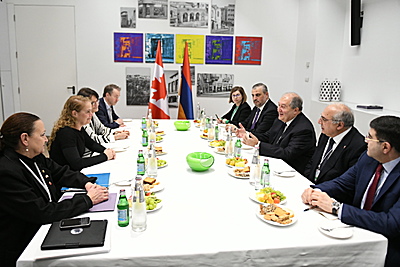 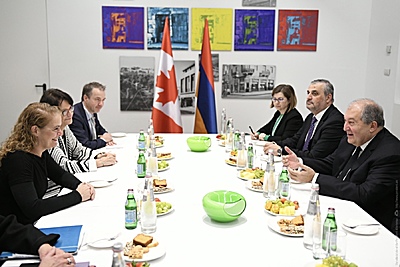 President Armen Sarkissian, who is in the State of Israel on a working visit, met with the Governor General of Canada Julie Payette.

Noting that relations between Canada and Armenia have a good history, President Sarkissian noted at the same time that future of the Armenian-Canadian relations has great potential. He said that was anticipating progress on the issue of opening an embassy of Canada in Armenia which would give a new impetus to the bilateral relations.

The interlocutors underscored the great input of the Armenian-Canadian community, which stands out for its unique role and discipline, in the history of Canadian success and noted that it is a strong bridge which connects the two friendly nations. In this context, President Sarkissian hailed the warm and humane attitude towards our compatriots who moved to Canada from Syria.

The parties concurred that Armenia and Canada could cooperate successfully in the areas of science, education, and modern technologies. Introducing the ATOM (Advanced Tomorrow) Presidential initiative, which is aimed at the development in Armenia of science and technologies, President Sarkissian noted that that multi-component program aims at bringing to Armenia outstanding international IT and high-tech companies where they can work on the advancement of artificial intelligence, mathematical modeling, and other topics. He also said that would be glad to see on that platform along with other partners also Canadian firms.

President of Armenia invited the Governor General of Canada, who is also a specialist in astronautics and cosmology, to visit Armenia and bring her input to the STARMUS 6th Festival. The event will be attended by Nobel Prize winners, world-famous scientists, astronauts, and musicians. The Festival aims at propagating science, inspiring younger generations and making science more attractive for them.