President of Armenia and King of Jordan held a meeting: President Armen Sarkissian raised the issues of a visa free regime for the citizens of Armenia travelling to Jordan and signing the agreement on the avoidance of double taxation 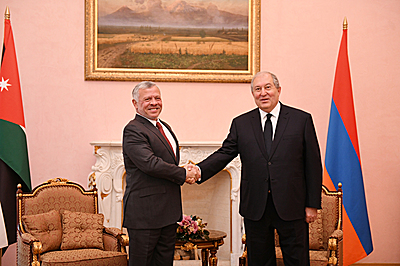 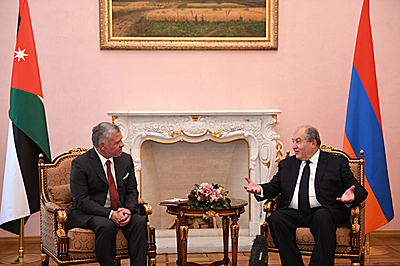 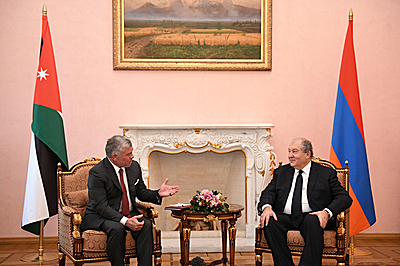 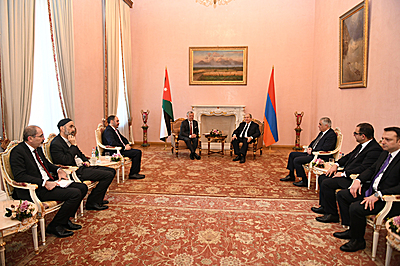 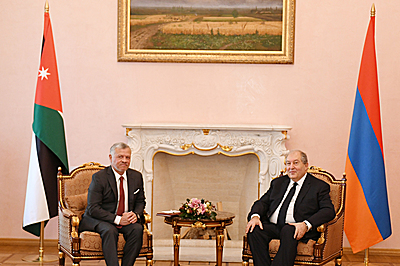 President Sarkissian welcomed the high guest and said in particular that the visit of the King of Jordan is historic and significant. He expressed hope that there would be many occasions to host His Majesty in Armenia. “Our two nations are ancient. Your nation represents the essence and axis of Islam; You, Your Majesty, as well as Your family, are descendants of Prophet Muhammad. Armenia as country which was the first to adopt Christianity, not only has good relations with Jordan but we two have a lot to tell each other,” the President of Armenia underscored.

President Sarkissian expressed confidence that potential, which the two countries could reach in the future, would be much more that it is today.

The King of Jordan Abdullah II said that the two countries are linked by good friendship and history. “We have great reverence towards the oldest Christian Church which is represented not only in Jerusalem but in our country too. It represents part of our past and is a beautiful element not only of our present but also of our future,” he underscored.

At the meeting, the President of Armenia raised the issues of a visa free regime for the citizens of Armenia travelling to Jordan and signing the agreement on the avoidance of double taxation. The interlocutors noted that great opportunities exist for cooperation in the areas of high-tech, education, science, and healthcare. Stressed was the necessity of expanding the already existing student exchange program, as well as the establishment of a direct air link between the capitals of the two countries – Yerevan and Amman.